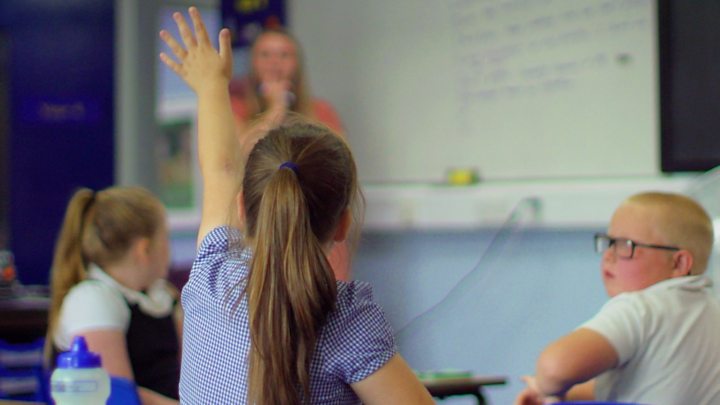 Lockdown widened learning gaps between richer and poorer primary school children, an analysis of thousands of families in England suggests.

Children from poorer families did at least one hour less learning a day compared with those in richer families, the Institute of Fiscal Studies found.

One head teacher says it could take up to two years to bring some children back to their correct attainment level.

The IFS surveyed the parents of 5,500 school-aged children in England during lockdown. It compared the richest 20% of pupils with the poorest 20%.

In May, the IFS said children from wealthier families were spending more time studying during the pandemic than poorer children. And in its latest research, the think tank gives a more detailed picture of how coronavirus has widened the gap between the richest and poorest primary school children.

Its findings suggest richer primary school children spent 75 minutes a day more on educational activities, compared with those in poorer families during lockdown.

Data from five years ago suggested there was no gap in learning time among primary school pupils.

Resources provided by schools are also unequally distributed, the IFS suggested. Around 42% of poorer primary-aged children received some sort of online lesson, conference call or support from their school, compared to 58% of richer children.

And the IFS said it found evidence suggesting children who have had better access to learning resources are also more likely to spend more time learning than children who do not.

Kirsty Tennyson is Executive Principal of the Three Saints Academy Trust and one of her schools is St Mary and St Thomas C of E in St Helens. More than 60% of the children are on free school meals and nearly half have a special need.

“In a deprived area there is already a gap that we’re striving to close – to narrow and ultimately to close [the gap],” she says. “Children who have not got that support at home and have not been able to access that learning – that gap will have grown hugely.”

Ms Tennyson says her schools have detailed plans for the start of term to help the children catch up, but she admits there is a “mountain to climb”.

“This is going to take into this academic year and the one after to really get those children back to where they need to be and for some children it will take longer.”

Phoebe is 11 years old and starts secondary school next month. She was using the home learning packs her school, St Mary and St Thomas, provided until she want back to school in June.

“I do struggle with maths so I have been worried if I do go down,” she says of her learning.

Her dad, George, is a single parent and says he has worked hard – with assistance from the school – to help Phoebe with her school work.

“I failed in maths,” he says. “The school helped me get my English qualification. If I don’t know [the work], I can’t help my child.” He added: “Phoebe’s school has always helped because they’re always on the end of the phone.”

Last month, the Department for Education announced a national tutoring programme, including £350m of funding for additional targeted support for children and young people aged 5-19 years who are most in need of help.

A spokesman said “being in school is vital for children’s education and wellbeing, which is why making sure all pupils return to the classroom in September is a national priority”.