The academic world, noted FM Cornford in 1908, runs on the principle of “unripe time”. The new proposal might be an excellent idea, but the time is not yet ripe. And, he remarked, time is like the medlar fruit: “it has a trick of going rotten before it is ripe”.

Well, amazingly, we seem to be in time-ripening season. The chilling death of George Floyd and the resurgence of the Black Lives Matter movement has turned on a floodlight. Now discussions of institutional racism and white privilege may end with an action plan, rather than the appointment of a sub-committee.

The change has been a long time coming. The analysis of institutional racism dates back at least to 1967, in the book Black Power by Kwame Ture (writing under the name Stokely Carmichael) and Charles Hamilton. Ture and Hamilton compare overt racist acts, such as lynching and arson, with the institutional racism of routine lack of access to medical care and the inflated rents charged by slum landlords. The book, which terrified white America, was largely about how to get black Americans to register for their newly granted voting rights and finally make a difference.

White privilege, even white supremacy, has been understood for much, much, longer. It has rarely been better described than by Malcolm X in the last speech he gave before he was assassinated in 1965:

It’s taken half a century, but academia, alongside arts, industry, and popular culture, is finally trying to work out what it can do to end the association between being white and being dominant.

Take university curriculums. In my own case I teach political philosophy, typically to students from more than 50 countries. Every year my colleagues and I comb over sources to find accessible non-white, non-western authors on the topics we teach. It’s a struggle. 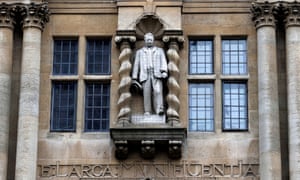 What can you do if you can’t find the texts? This year we are taking what now seems the obvious step of considering changing some of the topics, too, such as including African ideas of community and nationhood, as well as the Black Lives Matter campaign. The time is ripe.

Universities talk the language of diversity, especially of students and staff. But diversity is a passive concept, the mentality of a collector. The word “participation” is now emerging. It’s not only a question of who is accepted on to the course, though that is vitally important, but what students do when they are there. Who speaks, who doesn’t? More importantly, who is heard?

The sociologist Erving Goffman wrote that the default ideal American was a “young, married, white, urban, northern, heterosexual protestant father, of college education, fully employed, of good complexion, weight and height and a recent record in sports”. His point is apt. Some people glide into place, while others have to do all the hard work of fitting in. This privilege must end.

And things outside the classroom can make the university feel like home to some, and a hostile environment to others. Which brings me to statues. On a visit to the University of Cape Town in 2014 I was astonished to see the huge figure of Cecil Rhodes looming over the main staircase, surveying the plain. He’s no longer there, and soon, we are told, his statue in Oxford will depart, too. Monuments to people who terrorised the ancestors of current students reinforce the distinction between insiders and outsiders. What was put up first for political purposes can surely be removed for political purposes too.

But now we have started, where do we stop? The philosopher John Locke, revered as inspiration for the American Revolution, assisted in drafting slave-permitting constitutions. Queen Elizabeth 1 was an early investor in the slave trade. Buckle up. It’s going to be a bumpy ride.