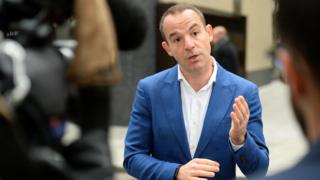 Changes to the Student Loans Company’s website are “irresponsible and dangerous”, the consumer finance expert Martin Lewis has claimed.

He says the tool exaggerates the status of their outstanding loans.

The SLC says its online repayment service gives the most up to date student loan account information that has ever been made available.

The company’s website has been moved from the site SLC.co.uk to the Gov.uk site.

But Mr Lewis, founder of the website Moneysavingexpert.com, says that “far from taking on board widespread concerns that student loans information is misleading and promotes financially poor decisions by graduates, the SLC has in some places doubled down on the opposite”.

“The first thing university leavers see when they log in, in a large font, is the amount of ‘debt’ they owe.

“This is demoralising, damaging and dangerous,” he said.

“The only impact the amount of debt has is whether you clear it or not within the 30 years before it wipes; and it’s predicted the vast majority, 83%, of university leavers won’t be earning enough that their repayments clear it in full.

“They’ll keep repaying it for the whole 30 years, like an additional tax – so the debt amount for them is pretty irrelevant.”

The SLC says the online repayment service is designed “to make it easier for graduates to access their account, manage their student loan and to avoid over repayment”.

The company added: “The service was extensively researched and tested prior to launch and the overriding feedback from our customers was that they wanted to be able to quickly and easily access their loan balance online.

“The balance information is particularly important to customers in the final stages of repayment as it helps them to determine when they should switch their repayments to direct debit.”

The SLC said the site made it clear that customers should carefully consider their circumstances before making any additional voluntary repayments and that any outstanding balance is written off at the end of the loan.

“In the coming months we will be contacting customers to remind them that, irrespective of the outstanding loan balance, they can only be required to pay 9% of earnings above the repayment threshold, and that they should consider their circumstances carefully before making any voluntary repayments.”

But Mr Lewis says the new site majors on a “scary, but often irrelevant, number” of the debt owed.

“That makes many think they should overpay like a normal debt.

“Yet, unless you’re making huge overpayments, for most people overpaying does diddly squat – you’ll still continue to repay 9% of everything over the threshold for 30 years,” he said.

“Overpaying is a total waste of money.

“So I was flabbergasted to see they went live with a ‘quick repayment’ system, without detailed warnings, cautions and explanation.

“That’s irresponsible and dangerous beyond belief. It’s doubling down on the damage.”

Mr Lewis says he will be writing to the SLC and the universities minister, Michelle Donelan, calling for the quick repayment facility to be removed immediately and for a thorough overhaul of the new government website.