The timing of Afterpay founders Anthony Eisen and Nick Molnar might have been marginally off but their decision to sell their buy-now-pay-later juggernaut to Jack Dorsey’s Square for $39 billion is a smart move for both the business and their personal wealth.

There is usually a confluence of factors involved when the founders of successful businesses – and the fact that the sale to Square is the largest in Australian corporate history is testament to Afterpay’s success – decide to sell out. 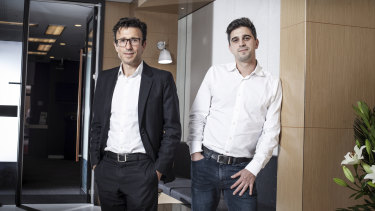 Afterpay founders Anthony Eisen (left) and Nick Molnar will stay on with the business.Credit:Eamon Gallagher

For Afterpay and its founders the pandemic produced a remarkable windfall.

Its shares, which had been trading below $40 before the severity of COVID-19 was appreciated by the market, rocketed from a low of just over $12 last March to a high of more than $150 in February this year.

More recently Afterpay was trading around $130 a share at the end of June before tumbling back below $100. The shares closed at $96.66 on Friday.

At face value Square’s all-scrip offer – a premium of just over 30 per cent on Friday’s close but only 10.5 per cent above Afterpay’s 30-day volume-weighted average share price – shouldn’t have been all that appealing to Eisen and Molnar, given Afterpay’s extraordinary growth so far and relatively modest penetration of a market that is exploding globally.

There’s a reason, however, why the group’s share price fell more than 36 per cent in just over a month.

The remarkable take-up of BNPL services by consumers, most notably Gen-Z and Millennials, initially spawned a host of similar start-ups.

Afterpay, as a first-mover, was, however, able to comfortably deal with that kind of competition, enter new markets offshore and maintain its phenomenal growth rate with a business model that was more merchant-driven than consumer-driven.

The impact of the pandemic on online shopping globally, and its flow-on effects to the BNPL sector, however, drew the attention of a different cohort of players – the incumbent financial services sector heavyweights who belatedly awoke to the threat and opportunity the model pioneered by companies like Afterpay, Zip Pay and Klarna presented for their businesses.

Peak BNPL may be approaching. For Eisen and Molnar, with billions of dollars of personal wealth at stake, it would have made sense to consider an exit strategy.

BNPL is a 21st century form of credit where the merchant effectively funds the line of credit in exchange, they hope, for the increased transactions numbers, conversion rates, basket sizes and customer retention that the data from BNPL players says is a realistic expectation.

In the US last year, it is estimated Americans spent more than $US20 billion ($27.3 billion) using BNPL services. Spending on BNPL platforms is expected to top $US1 trillion globally by 2025.

Not surprisingly other payment companies – credit card companies, banks and the big tech companies with an interest in building fintech services – started to pay increasing attention to the BNPL sector as they saw the transaction volumes soar over the past year.

PayPal, Commonwealth Bank (which has a small stake in Sweden’s Klarna), Visa and Mastercard have developed, or are developing, their own BNPL product.

The most recent wobbles in Afterpay’s share price came after reports that Apple, too, is developing a BNPL product in conjunction with Goldman Sachs. Apple has a market capitalisation of more than $US2.4 trillion. 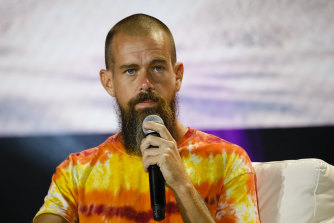 In other words, the land grab for merchants and customers by fintechs like Afterpay is about to enter a new phase, one where the still-immature start-ups will be competing against behemoths with their own, far broader and deeper customer bases of merchants and consumers.

For the fintechs, if not the wider sector, peak BNPL may be approaching. For Eisen and Molnar, with billions of dollars of personal wealth at stake, it would have made sense to consider an exit strategy.

The one that has emerged, while scrip-based (which defers and creates uncertainty around any eventual cashing out of their holdings), looks, on paper, to be a clever and value-creating one.

Square, founded by its chief executive Jack Dorsey – who’s also founder and, concurrently, CEO of Twitter – is perhaps best known for its sleek-looking payments technology but it is far more than just another hardware company providing a point-of-sale system.

It has morphed into a fintech offering, not just payments processing, but analytics and sales, inventory and employee management tools, basic banking services and short term loans to its merchants as well as helping them to develop online stores, rewards programs, customer relationship management systems and marketing campaigns.

Square has millions of predominantly small and medium-sized enterprises within its customer base, although it is expanding that base to target larger businesses, and is predominantly (85 per cent of its gross payment volumes) focused on the US.

Afterpay has about half its business (and the faster growing element) in the US but, apart from its Australian base, has been expanding into other geographies and has a presence in New Zealand, Canada, the UK, Spain, Italy and France.

Bringing the two businesses together should create a synergistic mix that drives more business to their combined merchant base, including the larger sellers that Afterpay has been able to attract, while expanding Square’s international reach.

It will also give Afterpay customers access to a wider array of merchants and to Square’s increasing financial services offering, which includes money transfers and stock and bitcoin purchases. The merger fits with Afterpay’s own vision of wanting to be more than just a BNPL business.
In the process, by creating a $US140 billion-plus ($190 billion-plus) company with a more diversified and robust product platform the combination should provide the enlarged Square a better prospect than Afterpay as a standalone business of surviving the looming onslaught of the behemoths.