The US Treasury has started emergency cash conservation measures after the government reached its debt ceiling on Monday. The Biden administration is now facing an intense partisan brawl as it seeks to head off a US default on its debts.

To say it upfront, it’s pretty unlikely that the US will actually default, however technically, on its $US28.5 trillion ($38.6 trillion) of borrowings. There has been regular congressional wrangling over the debt ceiling in the past, most notably in 2011 during the Obama administration when the Republicans refused to raise it without significant spending cuts. But there’s never been a default.

However, looking at the debt brawls of the past, expect to see some brinkmanship manoeuvres again this time. 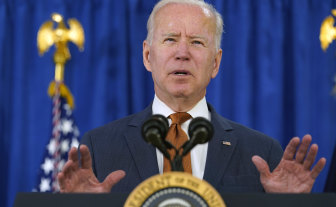 US President Joe Biden’s administration is seeking to avert a US default on its debt.Credit:AP

The 2011 impasse was ultimately resolved, with Democrat concessions, it did lead to Standard & Poor’s downgrading US government debt for the first time in history.

There were also government shutdowns in 2013 and 2018 – the government closed down non-essential services, closed national parks and federal institutions and sent federal employees on forced leave – and a 35-day shutdown in 2018 over Donald Trump’s demand for $US5.7 billion of funds for his controversial wall on America’s southern border.

There is some hypocrisy in the Republicans’ attempt to use the leverage of the debt ceiling this time to try and force the Democrats to reduce spending on programs like Medicare and social security. They are demanding “structural” and “institutional” reforms to spending in exchange for agreeing to raise the debt ceiling.

In 2019 the Democrats agreed to suspend the then-$US22 trillion debt ceiling for two years and allow government debt between then and July 31 this year to be incorporated into a new ceiling, which turned out to be the $US28.5 trillion it hit at the start of this week.

Most of that debt relates to spending by the Trump administration.

When Trump took office in 2016, US government debt was just below $US20 trillion. By the time he departed in January it was, thanks to his massive tax cuts and increased spending, some of it pandemic-related, more than $US27 trillion.

While the Biden administration has an ambitious spending agenda – it launched a $US1.9 trillion pandemic relief program of its own, has a $US1 trillion infrastructure program before Congress and plans a $US3.5 trillion budget (albeit largely funded by tax increases) — much of its spending has yet to occur.

Treasury’s initial response to hitting the debt ceiling has been to run down its cash reserves to avoid issuing new debt, selling some investments and ceasing to make contributions to some government employee retirement funds.

Given that the US bond market, and the short end of it in particular, provides the key benchmarks for global debt, the impact of the shutdown and how and when it might be resolved — or not — has global implications.

The decision to reduce its cash reserves from $US1.6 trillion earlier this year to about $US450 billion now has – along with the cessation of new issues of Treasury securities and a lengthening of the maturity profile of its borrowings – been cited as a factor in the massive infusions of liquidity into the US financial system that has created a shortage of Treasury bills and driven short-term US Treasury yields down to near-zero this year, despite historically high inflation numbers.

That cash and liquidity has been flowing, via the government, into the US economy and banking system and, because of the surplus of liquidity in the system, has been parked overnight at the US Federal Reserve at record levels.

It might also have had an influence on the US stockmarket, given that the continuing slide in yields has further reduced the alternatives for even barely-positive returns. 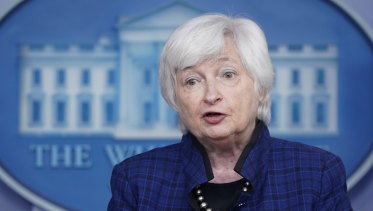 Janet Yellen has warned that a failure to increase the debt limit would have “absolutely catastrophic economic consequences” and could ignite a financial crisis.Credit:AP

Treasury Secretary Janet Yellen has suspended new debt issuance from Monday until at least the end of September. The Congressional Budget Office has estimated that, even with the extraordinary measures to conserve cash, the government is likely to run out of cash in October or, at the latest, November.

If that were to happen, the US would be unable to pay the interest on its debts – now running at about $US300 billion a year — and would be in technical default.

That’s improbable, even though there are some Republicans who profess to be unfussed by that prospect and Trump himself, citing his own personal experience with debt, once suggested that as president he would keep borrowing, knowing that if the economy crashed “you could make a deal” with creditors to buy back US bonds at a discount.

A resolution that raises the debt ceiling is likely, via either political manoeuvrings by the Democrats, who might be able to use the budget “reconciliation” process to pass it with a simple majority, or through Democrat concessions on social spending. But it is likely that the aggressively partisan and uncooperative stance the Republicans have adopted in response to the Democrats’ election victory will drag the process out to the eleventh hour.

That wouldn’t be good for financial markets. Past shutdowns have hurt the economy and financial markets, and the closer Congress gets to the “X-date” — the moment there would be a default – the more volatile markets are likely to be.

Given that the US bond market, and the short end of it in particular, provides the key benchmarks for global debt, the impact of the shutdown and how and when it might be resolved — or not — has global implications.

In previous shutdowns there has been, paradoxically, floods of money into short-term government debt in a rather peculiar version of a “flight to safety.“

Another phenomenon of past shutdowns has been an avoidance by investors of Treasury securities expiring during the shutdown period, which caused some aberrative trading within the bond market.

If investors took the risk of default seriously, of course, yields could be expected to spike – and the US sharemarket to fall – as people cashed out of the market to avoid losses. The ripples from that would be significant and would flow through international markets and financial systems.

The “domestic” US politicians are now engaged in is occurring at a vulnerable moment for the US and global economies, given the new threats to the world’s largest economy posed by the spread of the Delta version of the coronavirus. Signs are the developed world is already past the peak in the recovery from the economic effects of the pandemic.

Yellen has said that a failure to increase the debt limit would have “absolutely catastrophic economic consequences” and could ignite a financial crisis.

Hopefully sanity will prevail – but in the Trump era of US politics and with a Republican party whose make-up is very different to its predecessors, nothing can be taken for granted.