London (CNN Business)For months, there have been warnings to shoppers: Get through your holiday to-do list early. Wait until Black Friday or later, and you may not be able to find what you want.

But as stores prepare for the peak of the most important season for retailers, bigger companies are starting to send a different message: You may not have to worry about empty shelves after all.
What’s happening: Anxious about huge shipping delays, large chains have been stocking up on products for months. Some, like Walmart (WMT) and Costco (COST), have been chartering their own ships to travel from production hubs in Asia, while others have been leveraging long-term relationships with suppliers to get what they need.

“The availability of inventory is going to be better at the large, well-positioned retailers who either have more scale or flexibility to navigate through these challenges, or they’ll be viewed as preferential partners for their vendors,” UBS analyst Michael Lasser told me.

“Most of the inventory we need for the holiday season has already been delivered to us or is scheduled to arrive in stores and online in time for the holidays,” TJX CEO Ernie Herrman told analysts last week.
These companies have faced higher costs to secure hot items. But unlike some competitors, they can afford to pay more when needed.
Not everyone has gotten it right. Ross Stores (ROST) said that despite chartering an ocean vessel, it had some concerns about getting merchandise in time for the holidays due to clogged ports.
Victoria’s Secret also said that nearly 50% of its holiday merchandise is stuck in transit as Black Friday approaches. The company is trying to rely on planes to deliver merchandise, but it may be too late. Compared to this time last year, the retailer has 30% less pajama sets, a popular gift item.
Lasser said the US companies struggling the most are those that import a larger share of their products from overseas. Walmart, he noted, sources two-thirds of its goods domestically, which helps insulate them from issues at ports.
Then there’s smaller retailers, which can’t just throw money at the problem. They could fall even further behind the biggest players in the coming weeks.
The gap “has been widening for years,” Lasser said. “I would expect that to continue to be the case this holiday season.”

The “Great Migration” may not be as pronounced as once thought.
The US Census Bureau recently released data showing that migration activity has fallen to its lowest rate in more than 70 years, my CNN Business colleague Alicia Wallace reports. The findings toss some cold water on anecdotes that Americans were relocating more than ever during the pandemic. 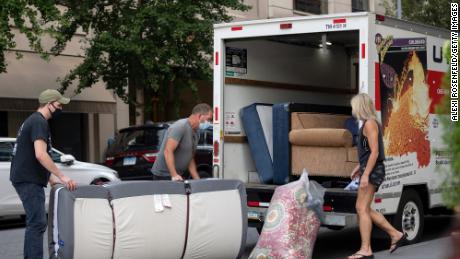 From 2020 to 2021, nearly 27.1 million Americans, or 8.4% of the US population, reported living in a different residence than the year prior. That’s down from 9.3% the previous year. The migration rate has been falling steadily since 2014.
Rethinking the narrative: There might not have been a massive overall trend of people moving across the country. But net migration out of urban neighborhoods did climb during the early stages of the pandemic, said Stephan D. Whitaker, a policy economist with the Federal Reserve Bank of Cleveland who has been closely studying migration patterns.
“Flows of migrants out of high-cost, large metro areas did increase during the pandemic,” Whitaker said. “However, many other types of moves, both long distance and local, declined. Summing all these moves reveals that, overall, fewer people relocated during the first year of the pandemic.”
Whitaker has found that some outflows from high-cost metro areas continued through spring 2021, as people relocated to smaller cities nearby and fast-growing destinations like Las Vegas and Nashville.
At the same time, people started returning to large cities — though not enough to replace those who had left.