On Tuesday industry fund veteran Mr Silk stepped down from running the nation’s biggest super fund, a job he has held for the past 15 years. 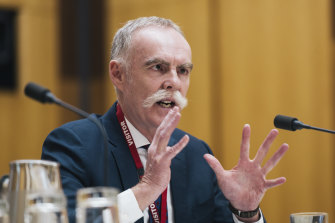 Mr Silk said his replacement, chief risk officer Paul Schroder, was well placed to lead the fund on its next phase, with its assets under management expected to swell from $225 billion today to $500 billion in the next five years.

Dr Russell said that under Mr Silk’s leadership the fund had been able to use its scale to bring more investment management in-house, and take positions in major private assets including global infrastructure. As the largest funds such as AustralianSuper grew even bigger in the years ahead, he said they would inevitably need to put a higher proportion of members’ savings in overseas assets.

“It means that inevitably more and more of the big funds are going to need to have investments around the world,” Dr Russell said in an interview.

“We’ll still have a growing pool of Australian assets, but the proportion will steadily diminish because… we’ve got to be conscious of the returns for members, and if you’re just constantly piling more money into a small pool, the returns will not be there for the members.”

Dr Russell said the sheer amount of capital building up in the superannuation system was also welcome news for Australian industry and startups seeking investors.

“For the first time in Australian history, really, there is this huge pool of eager patient capital looking for long-term investments. That is a remarkable structural change,” Dr Russell said.

Mr Silk is regarded as a leading voice within the industry super sector and Mr Russell praised the high ambitions Mr Silk had for the fund, and his execution of these goals.

Mr Silk said it had been an “amazing privilege” to lead AustralianSuper and he backed his replacement Mr Schroder, who he said had played a key role over the last decade, including by providing low-cost insurance and giving the fund a leading risk culture.

AustralianSuper was formed through the 2006 merger of the Australian Retirement Fund and the Superannuation Trust of Australia and has become one of the biggest infrastructure owners in the nation.

Under Mr Silk the fund has been aiming to improve its efficiency by bringing more of its funds management in-house, and it has also been involved in attempted takeovers of listed companies including Healthscope and Navitas. It has also expanded overseas, with offices in London, New York and Beijing.

Mr Schroder, currently chief risk officer, has been at AustralianSuper for more than a decade, working in senior roles including as head of strategy, brand and reputation, and as group executive in charge of membership.

The Secretary of the Australian Council of Trade Unions, Sally McManus, highlighted the fund’s high returns under Mr Silk’s watch, saying Australian super was one of the nation’s critical financial institutions.