What’s happening: The Dow and S&P 500 just logged their worst weeks since October, and strategists are watching for ripple effects as hedge funds that were burned by the Reddit rebellion remove risk.
But institutions like Goldman Sachs, JPMorgan Chase and BlackRock think that once the dust settles, markets will be able to push past any turbulence, aided by expectations for economic growth, ongoing support from the Federal Reserve and another round of stimulus spending from Washington. The S&P 500 rose sharply Monday and is up again in premarket trading Tuesday.

“No one should dismiss the combination of decentralized finance and rising retail influence that can drive markets intra-month,” John Normand, head of cross-asset fundamental strategy at JPMorgan, wrote in a recent note to clients. “But it seems a stretch to think that this issue is the pin prick that deflates a host of bubbles.”
That’s not to say market watchers are totally writing off this possibility. The sharp rise in shares of struggling companies like GameStop and AMC Entertainment is just the latest sign of market froth, raising questions about whether speculative activity has gotten out of control.

“[Last] week demonstrated that unsustainable excess in one small part of the market has the potential to tip a row of dominoes and create broader turmoil,” said David Kostin, Goldman Sachs’ chief US equity strategist.
If hedge funds decide to cover losses by selling shares of companies like Amazon (AMZN), which they had otherwise planned to hold, that could affect the wider market, including investors who never bought or sold a single GameStop share.
But Kostin ticks off numerous reasons that the big picture still looks generally supportive. He points to a pickup in Covid-19 vaccinations, with Goldman predicting that more than 50% of the US population will be vaccinated by May. Taken together with expectations for another hefty stimulus package from Congress, and corporate earnings that continue to beat forecasts, “investors have reason for optimism,” he said.
The GameStop drama also overshadowed remarks from Federal Reserve Chair Jerome Powell last week, who maintained that any talk of easing up bond purchases, which have flooded markets with liquidity, would be premature.
BlackRock also sees such factors as reason to look past any GameStop-triggered market moves.
“Worries about market exuberance are natural in such a climate, but we believe these stock swings are isolated instances triggered by market technicals — and are the wrong thing to focus on,” Jean Boivin, head of the BlackRock Investment Institute, wrote in a research note Monday.
That said: We saw what happened when GameStop shares shot up. What happens when they drop? GameStop’s stock price crashed nearly 32% on Monday. Shares are down another 35% in premarket trading to roughly $145 apiece.

Google investors shrug off the threat from Washington 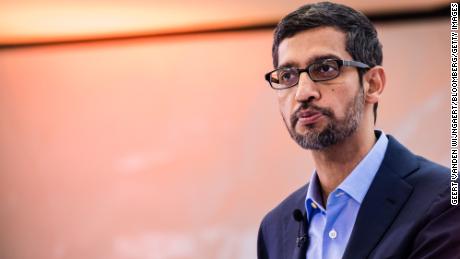 But investors may be overlooking one major problem, my CNN Business colleague Paul R. La Monica reports: regulatory risk.
The scene: Alphabet is trading near an all-time high, thanks to strong digital advertising and booming demand for its Google Cloud services. The stock has outperformed most of the other big techs during the past six months, gaining 25% since August.
But antitrust concerns that first surfaced during the Trump era haven’t gone away, even if they’re being downplayed by Wall Street. The company faces lawsuits both from the Justice Department and scores of states, who argue that Google has operated an illegal monopoly in the markets for online search and search advertising.
“Investors ignore very real antitrust threats to the biggest and most glamorous tech companies,” portfolio managers at Smead Capital Management wrote in a note to clients last month. “It is like it is getting closer to midnight and these Cinderella investors don’t have a clock or watch to know when the time strikes midnight.”
Alphabet may need to start defending itself more vociferously against calls for a breakup. Wells Fargo analyst Brian Fitzgerald argues that CEO Sundar Pichai and other executives could do that when the company reports earnings on Tuesday.
“We frankly expect the company to offer a greater level of detail in defending against allegations of market allocation/collusion, which the company has vehemently denied,” Fitzgerald said in a report last week.

What really drove the silver rally?

Silver futures surged as much as 13% Monday, touching eight-year highs after some posts on Reddit called for betting on the metal as a way to hurt big banks they claim have artificially suppressed prices.
But some users are pushing back on the notion that traders in the now-famous WallStreetBets community drove the rally, my CNN Business colleague Matt Egan reports.
“The Silver Squeeze is a hedge-fund coordinated attack so they can keep fighting the [GameStop] fight,” one recent thread was titled.
What we do know: Trading in silver futures leaped on Monday, according to data from CME Group. Demand for silver exchange-traded funds, which are popular among retail investors, also jumped. Momentum now appears to be easing, with futures down 6% Tuesday.
Debate over what really triggered the spike bolsters the case made by those calling for a formal probe by the Securities and Exchange Commission.
“We actually don’t know who all the players are in all this — whether there’s big money on both sides,” Sen. Elizabeth Warren told CNN Sunday. “That’s why we need an SEC investigation.”
Regardless, the benefits for anyone betting big on silver may be short-lived.
“Beyond this week and possibly sooner, we believe the new entrants into the market may tire and begin to liquidate silver holdings, with a commensurate price impact,” James Steel, HSBC’s chief precious metals analyst, wrote in a research note. “Buyer beware!”