The Commonwealth Bank has posted a 11 per cent drop in full-year profit and will pay a final dividend of 98c a share, as the banking giant's bottom line was hit by charges for bad debts as a result of the coronavirus crisis.

CBA on Wednesday said the drop in cash earnings from continuing operations, which were $7.3 billion for the year, was mainly because of provisions it took during the year for soured loans, but the lender still paid a higher dividend than many had expected. 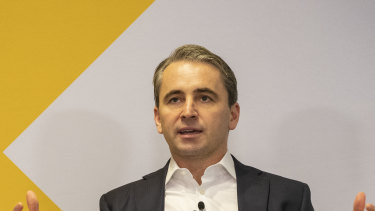 “While there is continued uncertainty about the duration and impact of the health crisis, Australia is relatively well positioned. We are starting from a position of fiscal and economic strength.”: CBA chief executive Matt Comyn. Credit:

CBA's final dividend was 31 per cent lower than last year, after the banking regulator urged boards to conserve their capital to support customers and finance new lending.

In one of the most keenly-anticipated results of this earnings season, market analysts had expected cash profits of $7.56 billon and a dividend of 71c a share, according to consensus estimates from FactSet.

Chief executive Matt Comyn said: "While there is continued uncertainty about the duration and impact of the health crisis, Australia is relatively well positioned. We are starting from a position of fiscal and economic strength."

CBA's results for the year to June come as banks' bottom lines have been smashed by the coronavirus, which has prompted hundreds of thousands of customers to defer their loans, raising fears of a wave of bad debts.

It is also the first result from a bank since the banking regulator last month gave the green light for bank boards to resume dividend payments, after urging them to consider deferring the payments in April at the height of the pandemic.

CBA is the first major banks to report during this profit season, with National Australia Bank, ANZ Bank and Westpac to provide quarterly updates.

Banks have experienced a surge in household deposits in recent months, which has driven down deposit interest rates and helped to lower bank funding costs. CBA's net interest margin, which compares funding costs with what it charges for loans, was 2.07 per cent for the year, down by 2 basis points.

CBA shares have rallied more than 35 per cent from the March low of less than $55, as markets have taken the view Australia's recession will not be as brutal as feared in the early stages of the pandemic.

Shares in the banking giant, at $74.70 on Tuesday, are still well below their February highs of more than $90.