The Commonwealth Bank of Australia has paid $5.8 million to thousands of schools over the past three years to run banking programs that the corporate watchdog says exposed children to sophisticated advertising tactics.

Releasing the report on its two-year review into school banking programs on Tuesday, the Australian Securities and Investment Commission (ASIC) said the key objectives for the banks offering school programs was customer acquisition and commercial gain. 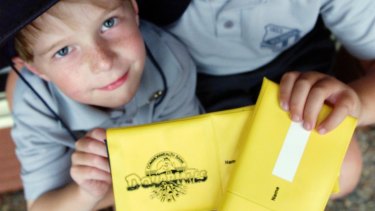 Dollarmites is worth about $10 billion to the Commonwealth Bank.Credit:Fairfax Media

The regulator said the programs were rife with conflicts of interest as schools were paid more depending on the number of deposit accounts opened and subsequent transactions made, calling for greater transparency around these financial relationships. It has also criticised the use of marketing material, toys and financial incentives used by banks to drive student participation in the programs.

CBA is the only big four bank involved with schools and is responsible for more than 92 per cent of programs nationwide, according to ASIC data measuring number of schools per bank. This has enabled more than 175,000 children to open accounts with CBA as of June 2020.

The bank said it did not agree with ASIC’s overall assessment, adding it had worked closely with the regulator over the past two years to improve its programs by removing unnecessary branding, altering incentive structures and commissioning independent research.

"We are proud of the program and the positive impact it delivers," CBA customer service executive Mark Jones said.

The programs are available to children from their first year of school and involve setting up deposit accounts to learn about banking. Schools are paid and children are often given toys or stationary each time a transaction is made. When the children become adults, banks can then offer credit cards and other financial products if the accounts are retained.

"People end up staying with the same bank their whole lives," Mr Brody said. "Clearly this is a strategy to get people young, because research shows they’re unlikely to switch."

"Should school communities rely on these statements, they may not seek to consider a range of other activities that may be more effective in building essential financial skills," it said.

ASIC wrote to each school banking provider as well as education authorities across the country this year about its findings. Smaller lenders Bendigo, IMB and South West Credit have since terminated their programs.

Mr Brody called for other states to ban the programs. "In the context of the government currently wanting to abolish responsible lending laws, that creates additional concerns and risks that credit will be given to people without appropriate checks and safeguards."