Goya president: Call for a boycott shows the division in our country

Goya Foods President Robert Unanue responds to calls to boycott his company after his visit to the White House.

Many took to social media to express their displeasure with Goya Foods CEO Robert Unanue after he praised President Trump at a White House event on Thursday, but others are flipping the narrative and calling for a Goya Foods "buy-cott."

"My brother came up with a terrific idea and I am encouraging all to join me in purchasing $10 worth of Goya Foods products and donating them to your local food bank," self-described "conservatarian" radio host Mike Opelka wrote on Twitter. "Let's push a BUY-cott, not a boycott. Let's show the #Goyaway people what compassion can do.

"Most of these people fronting about a #GOYABOYCOTT either don't use Goya Foods anyways [a]nd most of the ones who do will cave by #NocheBuena," Sen. Marco Rubio, R-Fla., wrote on Twitter along with an "I Love Goya" graphic.

The controversy has inspired some Goya Foods fans to give back. Virginia resident Casey Harper started a GoFundMe on Saturday to buy Goya products to donate food pantries. The page is already more than halfway to its $10,000 goal.

"I'm not surprised we have raised so much because people are tired of having to walk on eggshells in political discourse," Harper told FOX Business. "Also, Americans are fundamentally generous people so a chance to feed the hungry and stand up to cancel culture was an easy win."

Goya Foods touted its charitable giving on Friday after calls for a boycott, including from progressive Rep. Alexandria Ocasio-Cortez. Goya Foods said it has given "two million pounds of food to food banks across the nation who are in desperate need of food for families impacted by COVID19."

Robert Unanue, head of the New Jersey-based company, said Friday the boycott is "a reflection of a division that exists today in our country" that is "killing our nation." 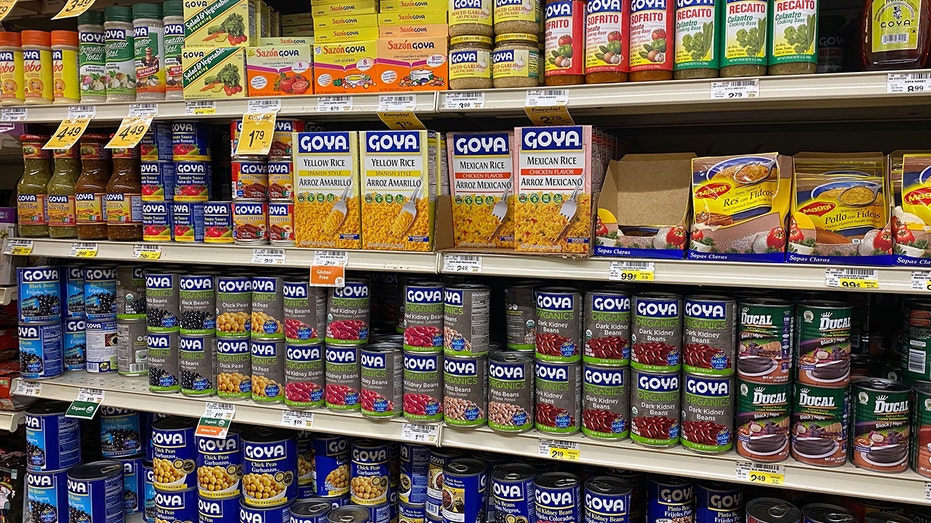 “We're with the president. We're with this country ⁠— right, left, center, up and down," Unanue told "Varney & Co."

Goya Foods claims to be the largest Hispanic-owned food label in the country.

Unanue said Americans were "truly blessed" to have Trump as a leader while speaking at a Hispanic Prosperity Initiative at the White House on Thursday.

FOX Business' inquiry to Goya Foods was not returned at the time of publication.