Finance house Greensill Capital’s Australian arm could face as much as $5 billion in claims from creditors including a cohort of German banks as administrators raised the prospect of the once high-flying group heading into liquidation.

Greensill’s local administrators Grant Thornton told the first meeting of creditors on Friday they had received formal claims totalling $1.75 billion, including from its main shareholder Softbank, its financial backer Credit Suisse and other creditors including employees.

Grant Thornton partner Matt Byrnes said the administrators have also been put on notice of a potential future claim of €2 billion ($3.06 billion) from the Association of German Banks, though administrators are yet to receive a formal creditors’ claim from the group as it is contingent on a number of factors.

The meeting also heard the local Greensill entity has filed a claim of about $1 billion against Greensill UK (which is also in administration). 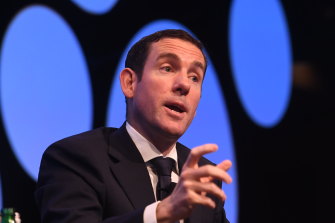 Before its collapse, Greensill was hurtling towards an initial public offering that would have valued the company at $US7 billion. A deal that would have made its founder Lex Grensill and his brothers billionaires.Credit:Peter Braig

Nearly 60 creditors and their representatives tuned into the creditors’ meeting, following the collapse of the Anglo-Australian group into administration last week.

Administrators from Grant Thornton told the meeting they were yet to receive a deed of company arrangement (DOCA) proposal from any party, potentially spelling the end for the group that was founded in Bundaberg in 2011 by farming dynasty scion Lex Greensill.

In a further nod to the group’s potential liquidation, Grant Thornton also referenced employees being able to claim entitlements under the federal government’s Fair Entitlement Guarantee (FEG). The guarantee is only available to backstop employee payments for companies in liquidation to ensure workers receive their full entitlements.

Company’s subject to a deed of company arrangement must pay back employees as priority creditors.

Greensill’s UK restructuring advisers from Grant Thornton had been working with US private equity group Apollo Global Management on a firesale of Greensill’s operating business and quick turnaround restructure of the group known as a pre-pack. However, that deal fell apart late last week after several attempts by Apollo to engage with administrators.

The liquidation of Greensill could spell disaster for the group’s largest client, steel tycoon Sanjeev Gupta and his GFG Alliance group of companies. A spokesman for GFG Alliance declined to comment. Representatives from the group did not attend the meeting. Mr Gupta’s biggest Australian asset is the Whyalla steel mills.

Representatives from the Australian Taxation Office, the Australian Securities and Investments Commission, the Attorney General’s Department, and the Association of German Banks also dialled into the meeting.

The Association of German Banks could hit Greensill with a $3 billion claim if the deposits in Greensill Bank are not covered, the meeting heard.

The majority of the administration process will be conducted in the United Kingdom by administrators Grant Thornton’s London office. The Australian entity in administration, Greensill Capital Pty Ltd, is the parent company for the Greensill Group. It provides administration and head office support to the group but operates only in a limited capacity.

Creditors at the meeting on Friday voted to appoint a committee of inspection to work with administrators. Excluding employees, 34 individual creditors have submitted claims. Likely debtors, that is companies that owe money to Greensill such as CIMIC’s UGL and Telstra, did not attend the meeting.

The next meeting has been scheduled for April 22. At that meeting, creditors will be able to vote on any DOCA proposal or for liquidation. A further report to creditors will be issued in approximately three weeks.