London (CNN Business)The CEO of the biggest US bank estimates that Americans are still sitting on $2 trillion in pandemic-era savings that can power the economy even as inflation bites. But what happens once that stash of cash is diminished?

What’s happening: Consumers in the United States should maintain healthy spending patterns for the next six to nine months, JPMorgan Chase CEO Jamie Dimon said at an investor conference on Wednesday. Stimulus checks are still making a difference.
“That fiscal stimulation is still in the pocketbooks of consumers,” Dimon said. “They’re spending it. They’re spending at very strong levels.”

But he conceded that may not be enough to keep an economic “hurricane” at bay as the Federal Reserve pulls back support and the war in Ukraine drags on.

“Right now it’s kind of sunny, things are doing fine,” Dimon said. But, he continued, a “hurricane is right out there down the road, coming our way.”

Dimon said it’s not clear if the hurricane will be “a minor one or Superstorm Sandy.” Either way, JPMorgan is “bracing” itself.
Big picture: Piles of savings have been the secret weapon of the pandemic recovery. The personal savings rate in the United States hit an all-time high of 33.8% in April 2020, quadrupling compared to February 2020. Covid-19 lockdowns dramatically limited spending options for Americans, while people who feared losing their jobs tightened their purse strings.

When the economy reopened, that fed a spending boom. And even as consumer confidence has dropped, as people worry about rising food and fuel prices, households have largely continued to whip out their wallets.
US retail sales in April were up 0.9% from the month before and were 8.2% higher than April 2021, according to the Commerce Department.
But that mountain of savings is starting to get drawn down as bills rise. The personal savings rates as a percentage of disposable income fell to 4.4% in April 2022, its lowest level since 2008. High inflation is also eroding the value of those savings, since a dollar doesn’t buy as much as it used to.
“That large pool of savings that many refer to is getting eaten up by higher inflation and wages that aren’t keeping up,” said Peter Boockvar, chief investment officer at Bleakley Advisory Group.
Households are turning to credit to help offset higher costs. Bank of America found that credit card spending in April climbed 22% year-over-year. But as borrowing costs tick up, taking on debt may start to look like a riskier proposition.
These trends underscore an important question: How long can high levels of savings continue to prop up the economy as pressures mount?
The answer could determine whether the United States falls into a recession next year, as some economists predict.
Dimon, for his part, wasn’t all doom and gloom. He said he remains an optimist even in the face of huge uncertainty — though his remarks don’t inspire much confidence.
“I think it’s okay to hope that we’ll end up okay. I hope it. That’s my Goldilocks,” Dimon said. “Who the hell knows?”

Oil prices fell on Thursday on reports that OPEC could start to pump more crude to make up for a drop in Russian production caused by Western sanctions. 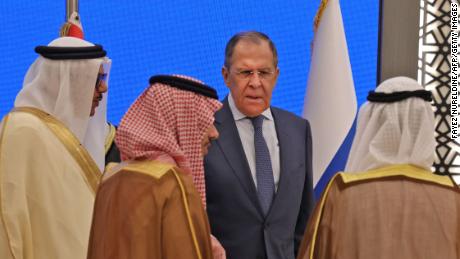 The latest: The Wall Street Journal reported Tuesday that some members of the oil exporters’ cartel were exploring the idea of suspending the OPEC+ supply agreement with Russia. This would allow countries such as Saudi Arabia and the United Arab Emirates to step in and ease a supply crunch that pushed global crude prices above $120 a barrel this week.
Saudi Arabia, OPEC’s de-facto leader, had indicated to Western allies that it was prepared to raise its oil production if Russian output fell substantially as a consequence of the sanctions, the Financial Times reported Thursday. An agreement could come at a meeting of OPEC and Russian energy ministers later today, per Reuters.
Saudi Arabia had previously dismissed US requests to increase production beyond a longstanding quota agreed with Russia and other non-OPEC producers. But concerns that sky-high prices could tip the world into recession appear to be prompting a rethink.
Brent crude, the global benchmark for oil, hit $125 a barrel on Tuesday, its highest level since early March. US WTI oil almost reached $120 per barrel.
Both have since dropped back in response to the media reports, with Brent dipping another 2.3% below $114 and WTI down 1.9% at $113 by 5 a.m. ET.
Sign of the times: The Biden administration would cheer the move as it tries to telegraph that it’s serious about fighting inflation, though many factors remain outside its control.
Gasoline prices in the United States hit another record of $4.72 a gallon on Thursday, according to AAA.

The number of workers being fired or laid off has hit the lowest point on record in the United States — a sign that employers are desperate to hold on to their staff as filling open roles continues to pose challenges.
Pink slips haven’t been eradicated entirely. About 1.25 million people lost their jobs in April, according to government data released Wednesday. But that’s an all-time low, breaking the previous record of 1.26 million set in December.
With nearly two openings for every unemployed job seeker, employers are doing everything they can to limit turnover, my CNN Business colleague Chris Isidore reports.
Breaking it down: The number of job openings in the United States fell slightly to 11.4 million in April. That’s still very high on a historical basis. The number of workers who quit their jobs in April was essentially unchanged from March at 4.4 million, and only slightly below the record 4.5 million who quit in November.
People who quit their jobs haven’t necessarily left the labor force. Most quit in order to take on new roles, often with better pay or benefits.
“Many employers are raising wages and incentives amid a severe labor shortage, which gives workers confidence that they can get better pay elsewhere,” Ed Yardeni, president of Yardeni Research, told clients on Thursday.
But that often creates new job openings when they depart, adding to the strain on businesses.

Also today: The ADP report on private payrolls posts at 8:15 a.m. ET. It’s considered a preview of the official jobs report arriving Friday.
Coming tomorrow: Economists expect to learn that the US economy added 325,000 positions in May — a solid number, though down from 428,000 the previous month.
Source: Read Full Article