More than 2600 staff at the National Australia Bank will have to reapply for jobs in three divisions as the financial giant restructures itself under a new chief executive and deals with the fallout from the coronavirus pandemic.

Chief executive Ross McEwan told staff in an internal email on Wednesday to complete the restructure as soon as possible and warned costs were critical. "Remember, every time we spend money at NAB we must … ask ourselves would our shareholders want us to spend it," Mr McEwan said. "That is the discipline required of each of us." 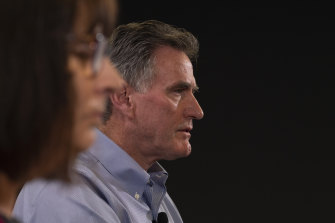 NAB chief executive Ross McEwen has asked his managers to restructure quickly in order to give staff certainty.Credit:Elke Meitzel

Consultation documents seen by The Sydney Morning Herald and The Age show there would be about 1200 fewer roles at the bank but hundreds of others created across three divisions – technology and enterprise operations, risk and finance – once the overhaul is finished in September.

At least 350 people are likely to be made redundant once this part of the process is complete, though they could be redeployed elsewhere in the bank. Many other positions that are sitting vacant because of what the Finance Sector Union said was an effective hiring freeze would also be eliminated.

"I'm aware that this creates anxiety and is impacting our colleagues," Mr McEwan said. "My ask of everyone, and particularly of our people leaders, is to do this with care, compassion and support and as quickly as possible to provide our colleagues with certainty in what is an incredibly uncertain world."

The coronavirus pandemic has intensified pressure on bank profitability, as interest rates have been slashed to near zero, squeezing returns, while lenders have also allowed tens of thousands of customers to put their loan repayments on hold.

Under the restructuring plan, staff and the union are being asked for feedback and then, if a role is changing substantially, its occupant is required to apply to get a new job or face redundancy. About 2600 staff are in that position, the documents show.

A NAB spokesman declined to comment on the figures and pointed to Mr McEwan's email. Finance Sector Union Queensland secretary Wendy Streets, who has led the union's consultation with NAB over its workforce overhaul, said there were about 20 restructuring processes happening at the bank.

"There will be job losses, there's no doubt about that," Ms Streets said, but she would not speculate on the total number of job losses or staff who would need to reapply for their jobs.

In 2017, NAB announced it would cut about 6000 jobs and add another 2000 under its previous chief executive Andrew Thorburn. But Ms Streets said the current wave of changes were triggered by the arrival of Mr McEwan, who started as chief executive in December 2019 and announced a management restructure in April.

NAB is set to update the market on its financial performance on Friday. Ms Streets said NAB had put the previous round of restructuring on hold when COVID hit in March. The FSU asked for another pause when Victoria's second wave of infections hit, but the bank had refused to halt the process for a second time.

"These are extraordinary circumstances and people's lives are already chaotic to say the least," she said.

Get our Coronavirus Update newsletter for the day’s crucial developments at a glance, the numbers you need to know and what our readers are saying. Sign up to The Sydney Morning Herald’s newsletter here and The Age’s here.