IOOF chief executive Renato Mota says private equity firms are likely to play a key role in driving consolidation in the wealth management sector, as major banks retreat in the wake of the Hayne royal commission.

After IOOF this week unveiled its $1.4 billion purchase of MLC Wealth from National Australia Bank and AMP said it would explore selling off parts of its business, Mr Mota said the sector was clearly attracting interest from private equity funds and it was worth asking why this was the case. 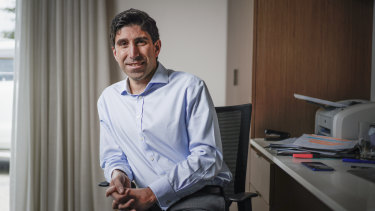 United States buyout firm KKR, which earlier this year bought 55 per cent of Colonial First State from the Commonwealth Bank, has been touted as a potential buyer of AMP's investment platform business, while Westpac is considering selling its BT Panorama platform.

In an interview, Mr Mota played down the chances of IOOF making any more acquisitions, after it has now bought wealth assets from both ANZ Bank and NAB, saying: "We absolutely have our hands full."

However, the chief executive said private equity (PE) funds were likely to be involved in the sector's deal-making, suggesting the funds could help drive further consolidation, as wealth managers seek greater scale.

"They see these assets coming out of banks, and they see the benefit of consolidation. So I think it’s fair to say that there are a number of PE players here that will do one or more deals and actually are a catalyst for creating the new industry, the new environment," he said.

"They would seem to be pretty active participants at the moment, and along with ourselves, they are probably the ones who are looking to create that consolidation."

Portfolio manager at Merlon Capital Partners, Hamish Carlisle, said it was possible private equity managers were taking a longer-term view on the wealth sector than sharemarket investors, or they were more optimistic about consolidating assets.

"At the moment public markets are not prepared to pay significant multiples for these businesses, given all the issues that the businesses are dealing with post-royal commission," Mr Carlisle said.

After its purchase of MLC, IOOF is set to become the largest financial advice group in the country, with 1884 advisers, the company said this week. However, the advice business has faced major challenges in recent years, including tougher regulation and heavy compensation bills after a run of scandals.

"The model of the past is broken, and broken quite badly in our view," he said. "A lot of those advice businesses that were part of the banks were losing money hand over fist. They were losing tens of millions of dollars a year and that was OK, because they were extracting margin out of product, and that creates all sorts of conflicts."

The merits of IOOF's purchase of MLC – partly funded by a $1 billion capital raising – has been debated by analysts.

Bell Potter's Lafitani Sotiriou this week said the purchase was "too risky, too big and too complicated." JP Morgan's Siddharth Parameswaran said that while he had reservations about the deal and its price, IOOF could gain the scale it needed to manage the pressure on fees.