New York (CNN Business)The Federal Reserve’s upcoming meeting on Wednesday will be one for the history books. The Fed will either raise rates by three-quarters of a point for the third consecutive time, to 3%, or it will hike them by an unprecedented one full percentage point to 3.25%.

But what happens after that is anybody’s guess.
Wall Street is divided on whether the Fed will keep hiking rates aggressively in November, or if inflation pressures will cool enough to allow the central bank to slow the pace for a bit.

As such, experts’ forecasts for the Fed’s key short-term rate after the November meeting range from 3.5% to 4%. The outlook is even murkier for December, with economists predicting rates could be as low as 3.75% or as high as 4.5%.

The big problem facing the Fed: The economy still seems to be running a little too hot for its taste. Inflation is undoubtedly a major problem, but the job market is strong, consumers are still spending at a healthy clip and housing prices remain high even though there has been a substantial spike in mortgage rates.

“This data will likely encourage the Fed to continue staying in overdrive but also increases the odds that sooner or later they will make a policy mistake by tightening financial conditions too much to fight inflation,” said Timothy Chubb, chief investment officer at Girard, in a report.
In other words, the Fed’s rate hikes could ultimately lead to the economy cooling off more than the central bank would like.

Too many big rate hikes risk “sending the economy into a mild recession,” Chubb said. But he’s not predicting a major economic collapse like 2008. It will more likely be “the 2001 recession variety, the next-least-bad outcome from an unlikely soft landing.”

Even if the economy avoids a major downturn, there are growing worries that the stock market — which has already had a dismal 2022 — could be in for more prolonged pain.
Investors have no clue where rates might be by the middle of next year, as forecasts for July 2023 range from a low of 3.25% to a peak of 5%. What’s more, other central banks, mainly the European Central Bank, are likely to step up the pace and size of rate increases as well. That will likely lead to even more market volatility.
“Major central banks still have work to do on inflation, including the Fed and the ECB. Recessionary fears present a weaker backdrop for global risk assets, and the global outlook remains abnormally uncertain,” said Luigi Speranza, chief economist and global head of BNP Paribas Markets 360, in a report.
Speranza said a recession in Europe “is inevitable.” And even though it may not be “deep,” Speranza thinks it will be “prolonged.” As for the US, he said “the macro outlook looks less negative than in Europe” but that “restrictive policy and below-trend growth are needed to tame inflation.”
It’s all serving to be a rude awakening for investors, who had been hoping Fed chair Jerome Powell could finally clip his inflation hawk wings and start flapping more like a monetary policy dove instead.
But unless the pace of consumer price increases starts to cool off much more quickly and dramatically in the coming months, the Fed won’t be able to slow the pace of rate hikes anytime soon. And forget about the expectations for the Fed being able to pause in 2023 and start signaling eventual rate cuts.
The Fed, as Powell likes to say, is data-dependent. And so far, it looks like all the data point to more hikes and that rates will stay higher for longer.
“This meeting is going to be very important in light of all the recent data,” said Roger Aliaga-Díaz, chief economist of the Americas and head of portfolio construction for Vanguard. “It’s too early to talk about a pivot.”

Big bank CEOs set to testify in front of Congress

The Great Recession may have taken place nearly fifteen years ago, but lawmakers are still keeping close tabs on top US banks to make sure that these firms remain financially healthy — and are acting responsibly too.
The CEOs of seven of America’s largest lenders will appear before the House Committee on Financial Services on Wednesday and again in front of the Senate’s banking committee on Thursday. The title of the House hearing? “Holding Megabanks Accountable: Oversight of America’s Largest Consumer Facing Banks.” 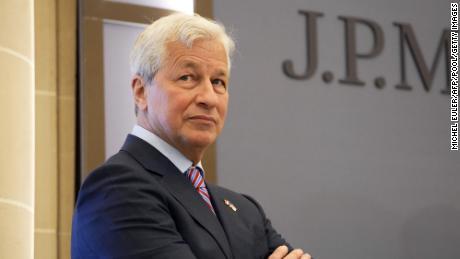 JPMorgan Chase (JPM) CEO Jamie Dimon, Citi’s (C) Jane Fraser and Bank of America (BAC) head Brian Moynihan will give testimony and be subject to questions from Congress. The CEOs of Wells Fargo (WFC), Truist (TFC), PNC (PNC) and US Bancorp (USB) will also be present.
The sorts of questions likely on tap: Do banks, which have built up reserves over the past few years, have enough of a financial cushion to deal with the possibility of rising delinquencies and defaults if consumers are unable to make mortgage and credit card payments on time? What are the big banks doing to combat growing concerns about fraud on their digital banking Zelle platform, which competes with PayPal’s (PYPL) Venmo and Block’s (SQ) Cash App?
Lawmakers will likely grill the bank CEOs about other issues as well, including fees, predatory lending and broader worries about the economy and housing market.