Westpac chief executive Peter King says a technology revamp will allow the lender to fully approve digital mortgages in as few as 10 minutes, as it prepares for a long-term shift towards digital banking, and a potential boom in refinancing.

On Wednesday, the banking giant will become the latest lender to announce plans to push into digital mortgage lending, wa key battleground for banks and fintechs as they try to slash approval times. 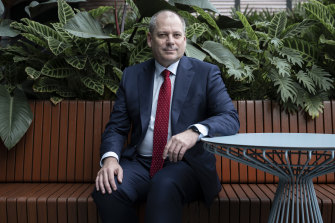 At a market briefing on technology, King will announce Westpac plans to launch a new process in the last quarter of this year, which it says will allow some customers to refinance through an automated system. Initially, the offer will be open only to individual borrowers who are refinancing an owner-occupied loan, have 20 per cent equity in the property, and earn a PAYG income.

By using data analytics to perform identity checks and credit assessments, the bank says it will be able to unconditionally approve some simple loan applications in 10 minutes. It plans to roll out the offer to a wider range of customers next year.

King predicted that over time, customers were likely to become more comfortable taking out a mortgage without talking to a person – though he said more complex cases would still require talking to a human.

“In other markets overseas, there’s just a lot more mortgages that are done without interacting with people. As people feel more comfortable with the [digital] processes, they’ll just trust them and use them,” King said. “As a bank in the digital world, you will need this capability.”

Opal Capital portfolio manager Omkar Joshi said online loans made sense to some extent, but he was unsure how many loans ultimately would be able to be approved automatically, rather with human involvement.

“Any loan that is slightly out of the ordinary will still have to have human intervention,” Joshi said.

King said Westpac had brought forward the change because rising interest rates could prompt borrowers to shop around for better deals.

“Interest rates are no longer falling, they’re going up. Customers are considering the cost of their banking, including their mortgage, and we see that refinance will be an important part of the market over the next couple of years,” King said.

RateCity reported this month that owner-occupied refinancing had hit a record high in May, as customers responded to rate rises by switching their lender.

Westpac, which in recent years lost market share because of loan approval problems, is taking a slightly different approach to ANZ and CBA, which have both announced plans to launch new digital lending products. King said Westpac was changing the bank’s main process for mortgages, meaning the faster approval times could eventually be rolled out more widely, including to loans written by mortgage brokers.

Markets bet that the Reserve Bank will raise interest rates again next week, after jacking up the cash rate from 0.1 per cent to 1.35 per cent since May.

King said the bank’s data on loan delinquencies and customer stress was better than three months earlier, and hardship calls had not really increased.

“All the end of June information is credit is better than it was at the half year of March,” he said. “The one message I would have for customers is if they are having any challenges, call us early.“