By Gerelyn Terzo, Wealth of Geeks

With the world’s heightened uncertainty, many investors expected bitcoin to behave like a safe-haven asset, similar to precious metals. After all, bitcoin has gained a reputation as digital gold, in which case it should be a hedge for investors during these tumultuous times. Yet bitcoin has given investors little protection from the fear that has gripped the economy amid the war in Ukraine, sky-high inflation, and the threat of rising interest rates. So, what gives?

On the one hand, Apple Co-Founder Steve Wozniak has described bitcoin as “pure gold mathematics” and even a “mathematical miracle.” On the other hand, Wall Street veteran Lloyd Blankfein suggested that perhaps bitcoin isn’t all it’s cracked up to be. The crypto market has been in the doldrums, with the bitcoin price currently trading below $40,000 after soaring close to $70,000 in November. Worse, gold, which is considered bitcoin’s chief rival asset, has been doing great and recently soared above the $2,000, a level it hasn’t achieved in two years. Gold’s rise only adds insult to injury for bitcoin investors.

The cryptocurrency community was quick to shed light on the situation for the former Goldman Sachs CEO. For example, Tuur Demeester, founder of bitcoin fund Adamant Capital, looked at it through a wider lens, pointing out that over the past six years, the bitcoin price is actually up 10,000%, “with compounding annual returns of 116%.” He suggests giving the market a minute. After all, it was only a few short months ago that bitcoin was trading at a fresh all-time high.

Indeed, bitcoin’s volatility is a double-edged sword that can result in dramatic price swings in either direction, as the below chart illustrates. 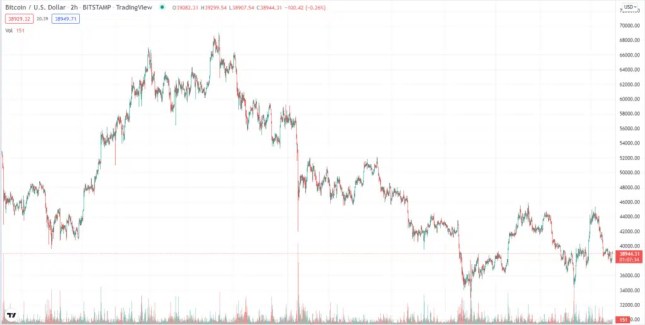 Source: TradingView/Wealth of Geeks
There are several reasons why the bitcoin price isn’t trading up to snuff, chief among which is that investors are losing sleep. The Bitcoin Fear and Greed Index, which measures market sentiment, hovers at a reading of Extreme Fear. Investors have decided to forego the advice of billionaire investor Warren Buffett, who suggests being greedy when others are fearful and vice versa, though he is talking about stocks. Nevertheless, there’s a whole lot of fear in the crypto markets these days, too.

Yet another explanation is that bitcoin is growing up and trading more like a risky tech stock such as Google than digital gold, as pointed out by trader PlanB on Twitter. The theory isn’t too farfetched, considering that Google parent company Alphabet’s stock has sunk 11.5% year-to-date compared to bitcoin’s 15% decline in the same period.

Despite the crypto price rout, there is increasing evidence of bitcoin’s wide-scale adoption. Most recently, fast-food joint Shake Shack has announced a bitcoin promotion that lasts through mid-March, giving customers a way to earn free crypto. The franchise will reward customers using Block’s Cash App debit card at the till with a 15% Cash Boost reward in bitcoin. According to reports, Shake Shack is looking to gauge millennial and Gen-Z interest in crypto and is hoping to harness the popularity of the Cash App to spark an interest.

Shake Shack’s approach is slightly different from other companies that have taken the bitcoin plunge, like AMC Theatres, the Dallas Mavericks, and Tesla, supporting BTC payments for select transactions. Shake Shack gives participants skin in the game by offering free crypto to customers and might even hasten bitcoin adoption in the mainstream.

Crypto has also been thrust into the spotlight amid the war in Ukraine. So far, Ukraine has attracted tens of millions of dollars worth of crypto to its coffers across leading coins like bitcoin, Ethereum, and stablecoin USDT. In terms of its use case, crypto shines over gold in times of crisis because payments can be completed in near real-time “for a fraction of the cost of traditional [payment] rails,” as pointed out by Pantera Capital’s Dan Morehead. Bitcoin has also taken hold in Russia, and Ukrainians have sought to block access in Russia so that Vladimir Putin’s administration cannot use crypto to sidestep financial sanctions.

Meanwhile, the cryptocurrency community has never been shy about bitcoin price predictions. The current bearish market cycle is no different except that these days, Wall Street weighs in, too. JPMorgan believes that bitcoin is trading about where it deserves and predicts its fair value will increase as market volatility subsides. The investment bank is bullish on the future and has attached a long-term bitcoin price outlook of $150,000.