Xinja chief executive Eric Wilson says he needs to raise around $5 million over the next 12 months to launch a new finance product aimed at Millennials, but warned there was a risk the venture may be unsuccessful.

The comments came as the fallen neobank faced an investor push back over a motion to rename the company during a virtual shareholder meeting held on Wednesday. 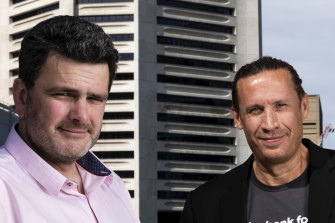 Shareholders were asked to vote on a binding resolution to change the company’s name from Xinja Bank to Xinja Holdings as well as a non-binding poll to determine the future of the company.

The name change needed a special majority of 75 per cent to be approved and a Xinja spokesman said the plan had been derailed by a “bloc of overseas-based shareholders” after it gained only 69 per cent approval.

“I believe the brand ‘Xinja’ is tarnished beyond repair and the company should abandon it altogether and start from scratch with a new name and a new board,” Mr Ginsburg said.

In the non-binding poll, 71 per cent of shareholders approved plans to develop new products and 99 per cent voted against winding up the company, after being told between 1 and 5 cents in every dollar invested could be retrieved if the company was liquidated.

Xinja’s new app would include a range of wealth management tools for customers aged 25 to 45 years old, including US share trading, robo-advice and potentially superannuation in the future, shareholders were told.

However, Mr Wilson said he could not provide further information fearing details would be leaked to the press or Xinja’s competitors.

“Sadly for a majority of shareholders, I can’t go into a lot more detail. Which to be blunt, is a pretty rubbish outcome,” he said.

Mr Wilson said more capital was needed but warned the plan to “pivot” operations may be unsuccessful. “We will have to raise about $5 million in the next 12 months … We may fail leading to a complete loss of remaining funds.”

Mr Wilson said he would continue to work without pay for six months to pursue Xinja’s new products, adding he would resign if asked to do so by the board. “I absolutely serve at the board’s pleasure and please be assured, should they ask for my resignation, it would be immediately forthcoming.”

A group representing 20 per cent of Xinja’s shareholders launched a campaign to put pressure on the board to expand the poll to include a third option that involved retaining the banking license, recapitalising and restructuring the company.

Public relations specialist Tim Allerton who represents the group said shareholders were dissatisfied as questions had gone unanswered and the meeting was wrapped up too quickly.

“It was a one-way conversation, they selectively picked questions and answered them partially or not at all,” he said.

Mr Allerton said investors were willing to put forward more money to ensure Xinja remained above its capital requirements, adding they were unconvinced the directors had pursued all avenues to retain the banking license.

“They have not answered the core question – Why did they return the license? Was it the regulators’ or their commercial call?”

“Any suggestion Xinja might recapitalise and keep its license after the return of deposits simply fails to understand how the banking system works in this country.

“We are always willing to talk about any offers to recapitalise. But there is simply no way forward for Xinja to keep its banking license.”

Senator Andrew Bragg, who chairs the Senate’s committee into the financial technology sector, said he had received a legal letter from Xinja shareholders outlining their concerns.

Mr Bragg said a decision on whether to call the Australian Prudential Regulation Authority (APRA) before the committee would be made in the coming days.

“We’re looking at ways to enhance competition and innovation and neobanks are a key part of that. We don’t want to lose neobanks in Australia,” he said.

Both Mr Wilson and Xinja’s chair Lindley Edwards apologised to shareholders for the decision to return all customer deposits, announced in December.