A bipartisan group of senators on Tuesday introduced a modest cannabis reform bill that has a good chance of becoming law.

The Secure and Fair Enforcement Banking Act, or SAFE Banking Act, would let cannabis companies access banking services and allow customers to use credit or debit cards to buy their products. It wouldn’t legalize cannabis federally.

Because cannabis remains illegal at the federal level, most cannabis businesses operating in states where the drug is legal are forced to work largely with cash. Still, an increasing number of banks and credit unions have started working with cannabis businesses in recent years, according to the Financial Crimes Enforcement Network, which is part of the Treasury Department.

Supporters say the changes in the SAFE Banking Act are key to helping the rapidly growing cannabis industry, whose products have become legal in a growing number of states. Medical cannabis is now legal in 36 states and recreational cannabis is legal in 15 states in the US.

“There’s no more chuckle factor,” to cannabis reform, Democratic Rep. Ed Perlmutter of Colorado, one of the House cosponsors of the legislation, said in a call with reporters last week.

Ohio Rep. Steve Stivers, a Republican cosponsor, said that while he’s not supportive of legalizing marijuana, “I live in reality.” He called the SAFE Banking Act a commonsense, bipartisan reform.

The bill has garnered widespread support in Congress before. Another version cleared the House late last year with bipartisan support but it was never taken up in the Senate, which was controlled by Republicans at the time.

Now that Democrats control the Senate, the bill has a higher likelihood of getting considered. GOP Sen. Rand Paul of Kentucky told Insider last week that it could “easily get” 60 votes. Sen. Paul is a co-sponsor of the Senate version of the bill.

“What I am for is changing our laws on banking so that states that have decriminalized do not have to circumvent the banking system, which leads to tax evasion, increased incidence of theft,” GOP Sen. Susan Collins of Maine, who has a bipartisan voting record, told Insider. “That’s what I would vote for.”

Here are seven things you need to know about the legislation. 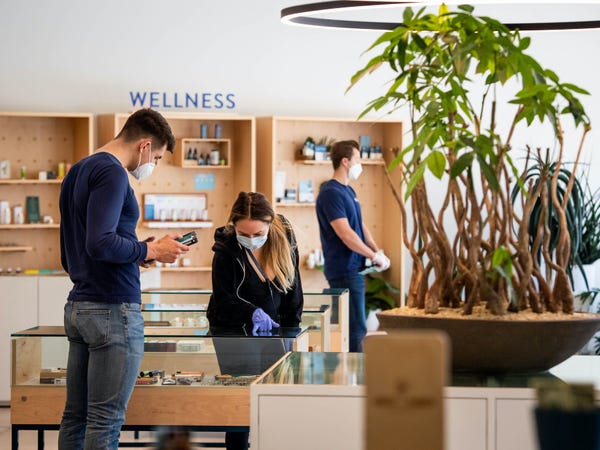 The SAFE Banking Act would protect financial institutions from prosecution when they provide banking and other commercial services to cannabis businesses, as long as the businesses are operating legally in states where cannabis sales are permitted.

Many banks and credit unions won’t work with cannabis businesses because they worry about facing penalties under federal money laundering laws. That makes it hard for cannabis companies to accept credit-card payments, open checking accounts, and apply for loans.

Banks that do choose to work with cannabis companies are forced to file onerous paperwork known as suspicious activity reports to FinCen.

The SAFE Banking Act would only protect commercial banking activities. It would not specifically allow capital markets access — things like US public offerings, listing on major US exchanges, or working with investment banks on deals and capital raises — for cannabis companies.

The legislation would also allow banks to provide custodial services to institutional investors that want to purchase shares in cannabis companies. Custodians hold stocks and settle trades for funds that invest in publicly traded stocks. Think of them like the plumbing that allows investors to safely buy stock in public companies — they’re crucial middlemen between asset managers and publicly traded companies.

Each investment bank and stock exchange can determine based on their own internal risk assessment whether to work with the industry. Some smaller and middle-market investment banks, including Cowen, Cantor Fitzgerald, and others, already do provide equity research and other services to US cannabis companies

State-licensed cannabis businesses can have a hard time obtaining a bank account. None can process credit cards or take standard business deductions on federal taxes because businesses that work with illegal substances are barred from doing so.

Instead, many have to rely on cash transactions, both for paying their workers and selling their products. That makes them vulnerable to crime.

“It’s not a good situation,” GOP Sen. Lisa Murkowski of Alaska said last week. She plans to support the SAFE Banking Act “so operators are able to operate within the law,” she said.

The bill would allow businesses to pay any taxes electronically. Right now the IRS has to build “cash rooms” at its local offices so businesses can deposit their taxes.

Some states levy a penalty on paying taxes in cash, forcing cannabis businesses into a higher effective tax rate than other industries. 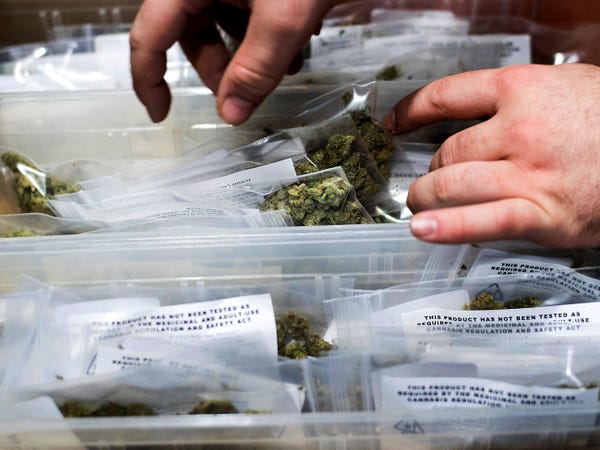 The reforms extend to hemp businesses

Section 11 of the SAFE Banking Act says that the provisions of the bill would apply to any legitimate hemp business operating in the US, in the same way they would to businesses that work with cannabis.

Under the 2018 Farm Bill, hemp in the US is defined as containing no more than 0.3% of THC, the psychoactive ingredient found in cannabis. The bill notes that despite the fact that hemp is legal on the federal level, hemp operators and businesses have had difficulty accessing banking services, in large part due to “confusion about the legal status of such products.”

The legislation would mandate that federal banking regulators submit an annual report to Congress on the availability and access to financial services for women and minority-owned cannabis businesses, as well as recommending any legislative or regulatory fixes that would increase access.

In addition, the legislation would have the Government Accountability Office study the barriers facing minority and female-owned entrepreneurs who want to enter the cannabis industry and grow their businesses. 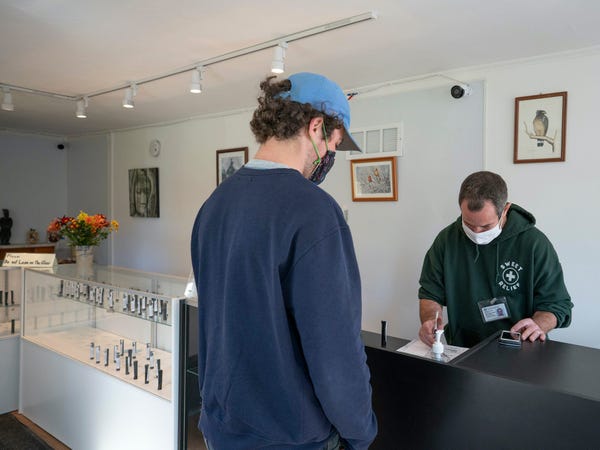 If passed, the bill would tap the Federal Financial Institutions Examination Council, or FFIEC, to draft guidelines and “examination procedures” for depository institutions looking to provide services to cannabis businesses.

The FFIEC would have 180 days after the enactment of the bill to develop these rules.

The bill doesn’t address one of the key financial burdens that cannabis companies have to deal with: a section of the tax code called 280E, which prohibits companies that sell illegal drugs — like marijuana — from deducting regular business expenses, like office supplies or health insurance premiums.

280E comes at a great cost to cannabis companies. Financial and strategic advisory firm Viridian Capital Advisors says that getting rid of 280E would save the 10 largest publicly traded US cannabis companies an estimated $279 million each year.

Under the tax code, cannabis companies are only allowed to deduct the cost of goods sold. 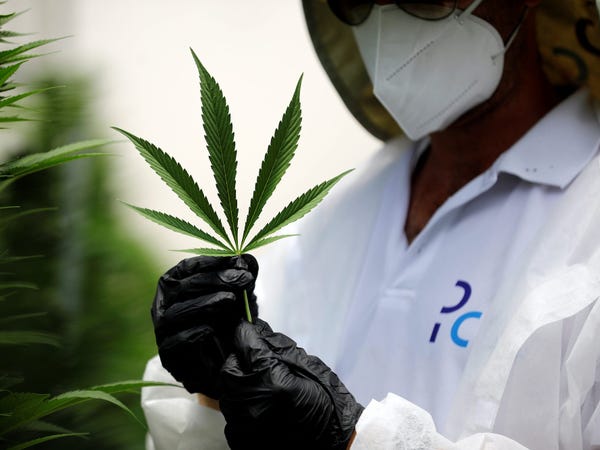 Other cannabis bills are in the works

Senate Minority Leader Chuck Schumer is working on a bill to undo the federal prohibition on cannabis with fellow Democratic Sens. Cory Booker of New Jersey and Ron Wyden of Oregon.

Booker and Wyden provided few details about the bill this week when asked by Insider, but it’s expected to include criminal justice reforms, new taxes, and regulations. It’s possible that it may take on and add to many of the protections in the SAFE Banking Act.

On Thursday, Sen. Bob Menendez of New Jersey introduced the Clarifying Law Around Insurance of Marijuana Act, or CLAIM Act, with Paul and Democratic Sen. Jeff Merkley of Oregon. The bill would allow cannabis businesses to access insurance products including worker’s compensation, property, casualty, and title insurance, in states where cannabis is legal.

Charlie Bachtell, CEO of US cannabis company Cresco Labs and the chairman of the National Cannabis Roundtable, told Insider that the SAFE Banking Act would significantly normalize the industry.

While Bachtell said he and other executives at the trade group would have liked to see explicit mention of access to capital markets and 280E reform, he added that most cannabis reform seems to happen “incrementally.”

“We’re viewing this as an incredibly positive opportunity to have unprecedented movement at a federal level that can then be built on subsequently,” Bachtell said.

This article was updated on March 23 to include that the Senate version of the legislation has been introduced.