India is in the throes of a deadly, record-breaking wave of coronavirus infections.

More than 200,000 people have died of COVID-19, making India the fourth country to cross that grim fatality count after the United States, Brazil, and Mexico. The government has also reported more than 360,000 cases in the last 24 hours, a new global record, which comes after a five-day streak of the highest single-day increases in new COVID-19 infections of any country. (Still, some experts fear that the reported numbers severely undercount the reality of both the country’s active cases and death toll.)

As more and more people contract the deadly virus, the surge is also overwhelming India’s health care system, with hospitals scrambling for oxygen supplies and emergency aid. Worse, the outbreak so far has shown no signs of slowing down.

“I’m afraid this is not the peak,” said Dr. Giridhara R. Babu of India’s Public Health Foundation on Monday, per CNN. “The kind of data that we see, (we are) at least two to three weeks away from the peak.”

Ahead, we explain India’s coronavirus crisis and list ways that you can help.

How did this happen?

Though India seemed to have endured the worst of the pandemic last year, with cases at record lows in January and February, things took a turn for the worse by early March.

Some experts believe that a variant called B.1.617 is behind the resurgence of coronavirus infections across the country. Another well-known and highly transmissible variant, B.1.1.7, which emerged in the United Kingdom late last year, may also hold responsibility for the uptick. Lax social distancing guidelines, declining vaccination rates, and a slow response from Prime Minister Narendra Modi only served to exacerbate the situation in India. 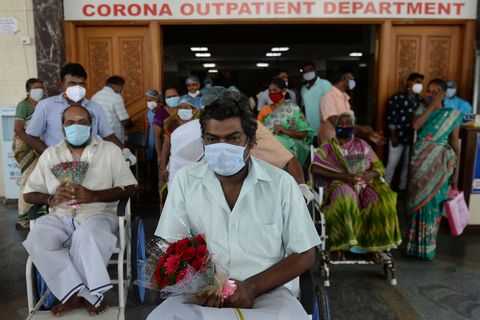 What about India’s vaccine rollout?

India is the world’s largest manufacturer of COVID-19 vaccines. So why is so little of the population vaccinated?

Through the Serum Institute of India, the country produces about 60 percent of the world’s vaccines, playing a critical role in stemming the tide of the pandemic. But India is now running out of raw materials to produce enough vaccines for its own population of 1.3 billion people.

Glaring global inequities have undoubtedly played a role in the uneven vaccine distribution across the world. For instance, Vox reported that high-income countries have purchased 53 percent of the current vaccine supply, while low-income countries have bought just nine percent. And Duke University’s Global Health Innovation Center estimated that the 92 poorest countries in the world will likely be unable to vaccinate 60 percent of their populations until 2023–or later.

Countries like the United States and the United Kingdom were able to secure early vaccine supplies from pharmaceutical companies, like Pfizer and Moderna, by giving them billions of dollars to expedite research in exchange for priority vaccine access, according to Vox. In practice, this means countries that can’t afford to purchase doses in advance have to wait longer to access the life-saving vaccines.

Richer countries have also hoarded more vaccines than their populations require. Canada, for example, has bought enough to vaccinate its population five times over. While 16 percent of the world’s population resides in high-income countries, 46 percent of COVID-19 vaccines have been distributed there.

Not only do countries in the Global North have the majority of vaccine supplies, but they’re also able to control production through export restrictions.

In February, President Joe Biden signed the Defense Production Act, which cut off the export of raw materials needed to produce vaccines to India. Adar Poonawalla, chief executive of the Serum Institute of India, tweeted to the president on April 16, “If we are to truly unite in beating this virus, on behalf of the vaccine industry outside the U.S., I humbly request you to lift the embargo of raw material exports out of the U.S. so that vaccine production can ramp up.” Facing mounting pressure, the United States agreed this month to lift the restrictions, as well as to send India 60 million doses of the AstraZeneca vaccine.

How can I help?

In addition to spreading awareness about India’s current COVID-19 crisis, you can also donate money to any of the below organizations that are helping people on the ground.

You can also find more resources through this crowdsourced document of ongoing mutual aid efforts in India.