Supermarket giant Woolworths is facing increasing pressure from Darwin-based health and Indigenous community groups to reconsider a controversial plan to open one of its biggest Dan Murphy's liquor outlets in the city.

In an open letter to the Woolworths board ahead of its shareholder meeting on Thursday, the groups urge the company to reconsider its proposal to build the bottle shop close to communities that have severe restrictions on alcohol consumption.

“Today we’re bringing you an open letter from community, health and Aboriginal and Torres Strait Islander organisations asking you to put aside the ill-considered and harmful plan to build one of the biggest bottle shops in the country in Darwin within walking distance of three dry Aboriginal communities," said Caterina Giorgi, chief executive of the Foundation of Alcohol Research and Education (FARE). 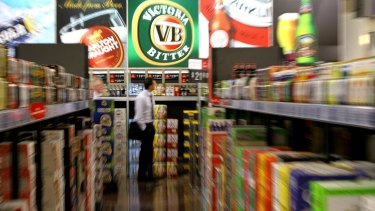 Woolworths has faced strong objections of its plans to develop a Dan Murphy’s store in Darwin.Credit:Gabriele Charotte

"The Independent Liquor Commission rejected your application because of the harm it will cause. Will you abandon your plans to build this Dan Murphy’s?”

The groups, which include the National Aboriginal Community Controlled Health Organisation, the Northern Territory Council of Social Services and the Australian Medical Association, do not plan to put the question directly to the board at the shareholder meeting on Thursday.

The Independent Liquor Commission, which was set up by the NT government as part of its plan to develop an integrated harm reduction strategy around alcohol, rejected the Woolworths proposal in September last year saying it was not in the public interest.

"Alcohol fuelled crime and anti-social behaviour is already a major concern within the broader Darwin community," it said in its decision.

Woolworths is appealing the decision, but on Wednesday the NT government introduced legislation that would sideline the independent Liquor Commission and give the director of liquor licensing 30 days to decide on the application.

"This legislation is about cutting red tape, it is about clearing applications which have been caught up administratively for years now," a government spokeswoman told the ABC.

Woolworths' liquor business, Endeavour Drinks, said in a statement on Wednesday: "We have spent a lot of time having meaningful conversations with local communities in Darwin to understand their views, listen to any concerns they may have and to address them.

John Paterson, chief executive of the Aboriginal Medical Services Alliance Northern Territory, said: “The absolute hypocrisy of Woolworths taking this action, while being a partner of NAIDOC Week, is almost unbelievable."

"For example, we have been working closely with the Elders and leaders of both the Minmarama and Kulaluk communities and we have committed to a number of measures that we believe will mitigate the risk of alcohol related harm."

Woolworths' board had planned to be free of the alcohol and pubs business by this stage. The company's investors voted to demerge the $10 billion Endeavour Drinks business, which includes Dan Murphy's and its controversial pubs and poker machines business, at last year's annual meeting.

Plans to spin-off Endeavour fell through this year when its pubs were forced to close due to COVID-19.

The Woolworths shareholder meeting is due to start 10am on Thursday.