Facebook has banned the sharing or viewing of our news articles on its platform. For independent journalism straight from the source, download our app and sign up to our newsletters.

Footwear retailer Accent Group will not hand back any of the almost $50 million it received in JobKeeper subsidies despite reporting a $20 million jump in profits for the first half of fiscal 2021.

The $1.2 billion retailer, which operates stores such as Platypus, Hype and Sketchers, made no indication it would repay the JobKeeper payments in a statement to investors after market close on Tuesday. 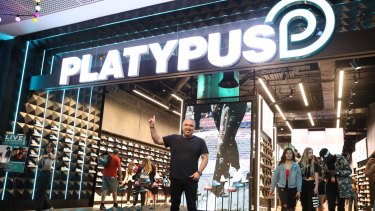 For the six months to the end of December, Accent received $24.5 million worth of JobKeeper payments, which is in addition to the $21 million accepted by the company across the first six months of 2020.

Of this, the retailer said only $9.6 million was a direct benefit to the business. However, a portion of the remaining $14.9 million still subsidised employment for the retailer, being used to pay workers who “did not work sufficient hours to be otherwise remunerated more than the subsidy”. Some of the JobKeeper was also used to pay workers who could not work due to government-mandated shutdowns.

Accent Group reported a $52.8 million net profit after tax (NPAT) for the half, up 57 per cent on pre-pandemic levels. The company will also pay a record 8 cents per share dividend, also up over 50 per cent on the first half of the 2020 financial year.

Sales for the half rose 6.6 per cent to $541.3 million, and the business reported $72 million of cash on hand, 65 per cent higher than before the pandemic.

Chairman David Gordon told investors the company intends to hold on to its JobKeeper funds to pay workers in the event of future lockdowns. The company said store closures due to lockdowns in Victoria and Auckland cost the group $39 million in sales.

“Given the continuation of the COVID-19 pandemic and the likelihood of ongoing lockdowns, we confirm our commitment to continue applying JobKeeper funds to keep our team employed,” he said.

“It remains our position that no JobKeeper funds have or will be used in the calculation or payment of management bonuses or dividends.”

Accent Group also received $7.9 million in rental concessions for the half.

Shadow Assistant Minister for Treasury Andrew Leigh, who has been a fierce advocate for the repayment of JobKeeper, criticised Accent’s decision, saying the business should repay the subsidy in light of the $1.3 million bonus given to chief executive Daniel Agostinelli last year.

“It’s called JobKeeper, not BonusKeeper. Accent Group paid its CEO a $1.3 million bonus, in direct contravention of the Business Council of Australia and the ATO. Their profits for the second half of 2020 are up 60 per cent on pre-pandemic levels,” he said.

“They can easily afford to repay JobKeeper, and should do so immediately. More than $100 million of JobKeeper has so far been repaid. The case for Accent Group to repay is at least as strong as for any of those who’ve repaid so far.”