​The peak bodies representing more than 200,000 Australian accountants have hit out at Treasurer Josh Frydenberg’s controversial proposal to weaken the influence of shareholder advisory groups, as the nation’s top business lobby detailed its support for the overhaul.

CPA Australia and Chartered Accountants Australia and New Zealand on Tuesday expressed “significant concerns” about their members being caught up in the proposed changes, which were announced by the goverment in April and seek to reduce the power of proxy advisers. 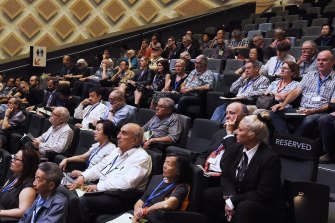 Shareholders at an annual general meeting. Proposed changes by the federal government could weaken the influence of the shareholder advisory industry.Credit:Kate Geraghty

The two accounting groups rejected all of the proposals detailed in a consultation paper, stating that they could force not just proxy advisers but accountants, legal advisers, taxation specialists, asset consultants and investment managers to disclose confidential advice.

“We are concerned at the number of assertions that have been made in the consultation paper without substantiation, examples, or adequate explanation,” the two bodies said in a submission to Treasury.

“We believe that a number of the consultation paper’s assertions, ostensibly aimed at proxy advisers, could equally be made by policy makers to require access to any advice provided on a confidential basis by trusted advisers to superannuation fund trustees.”

Proxy advice firms provide research to institutional investors, including on how to vote on corporate governance issues, such as executive pay or on environmental and social matters from climate change to diversity on boards at annual general meetings, or on mergers and acquisitions.

The changes proposed by Treasury’s include forcing proxy advisers to give their research and advice to the board and management of companies first, for comment, before supplying it to their own clients. The proposals came following pressure from top corporate lobby groups, the Business Council of Australia (BCA) and The Australian Institute of Company Directors, which have pushed for more transparency and accountability in the sector.

“It’s preposterous,” said Dean Paatsch, one of the co-founders of Ownership Matters. “This is my private property. How dare they capture the government to get a free copy in advance of my clients to prevent me from talking to my clients until their vetting period. That’s just Eastern European.”

The BCA said in its submission that proxy advisers had an important role in the economy but the changes were still necessary. It argued that the consequences of incorrect proxy advice could cause a loss of confidence in a company and adversely affect its share price, as well preventing the election of directors to boards or even a takeover or restructuring from occurring.

“These are modest and necessary changes that will enhance the operation of financial markets by introducing higher standards of accountability for proxy advisers and, most importantly, improve the quality of the service they provide to investors,” the BCA said. “Ultimately, the company and company directors have strict obligations to act in their best interests of shareholders and provide accurate and timely information. Similar obligations should also apply to those who advise shareholders.”

Activist investment manager Sandon Capital said in its submission to Treasury there were too many instances of persistently underperforming companies, whose management and directors remain entrenched and safe from accountability.

It pointed to a number of high-profile corporate scandals in recent years at companies such as Commonwealth Bank, Westpac, National Australia Bank, Crown and AMP. “In each instance, we believe stronger oversight and influence by shareholders, as the ultimate owners, may have helped avoid the worst of these scandals,” said Gabriel Radzyminski, director and founder of Sandon Capital.

“The consultation paper paints a picture of corporate Australia under siege by an unregulated and unfettered proxy advisory industry, prone to errors and misstatements. There is no evidence to support this.”

Currently proxy advisers are required to hold a financial services licence. However, an exemption for groups such as the Australian Shareholders’ Association, and environmental or social interest bodies was put in place by the Howard government.

The lack of detail in the consultation paper has raised concerns that the exemption could be removed, forcing groups as varied as the Australasian Centre for Corporate Responsibility, GetUp! and Lock the Gate to hold a financial services licence.

Brynn O’Brien, the executive director of the Australasian Centre for Corporate Responsibility, said the exemption served a public purpose. “It is there to facilitate public conversation about corporate governance. We live in a free and open society and we’re allowed to express opinions. Corporations benefit from robust exchanges with their shareholders about voting at AGMs.”