The Australian Federal Police raided the offices of Macquarie-backed tech group Nuix on Thursday following the launch of a criminal investigation by the corporate regulator.

In a statement to the ASX on Thursday, Nuix said: “A search warrant was today executed at Nuix’s Sydney office seeking documents in relation to an investigation into the affairs of an individual. Nuix understands that the warrant does not relate to any allegation of wrongdoing by the company.”

The Australian Securities and Investments Commission (ASIC) issued a statement confirming its involvement in the matter, which relates to a criminal investigation it is conducting. 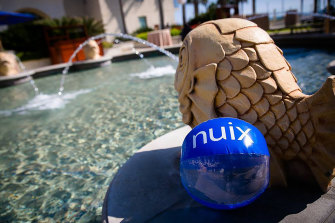 Nuix offices have been raided by the Australian Federal Police. Credit:

The raid concerned “matters that have come to light subsequent to Nuix’s IPO and listing in December 2020. ASIC’s investigation into certain individuals remains ongoing,” an ASIC spokesman said.

Following a series of revelations by The Sydney Morning Herald, The Age and The Australian Financial Review, the Nuix board cut ties with the embattled company’s co-founder Tony Castagna as well as chief financial officer Stephen Doyle.

The AFP has previously confirmed a criminal investigation into the dating of a $3000 options package that Dr Castagna turned into an $80 million windfall when the company floated on the Australian Securities Exchange in December last year.

Dr Castagna’s options package did not appear on the Nuix registers until 2011. At that first appearance, the documents suggested he had been granted the 30,000 options back in 2005.

Dr Castagna spent a year in jail for tax avoidance and money laundering. His conviction was subsequently quashed and he was released in 2019 when he promptly returned to the Nuix board. He quietly stepped down just before the company floated. His ongoing consultancy with Nuix was terminated following the joint investigation by these mastheads.

In 2012, a year after Mr Doyle became Nuix’s CFO, he lodged documents with the corporate watchdog ASIC reporting he had been issued with 50,000 Nuix shares costing him $301,500.

However, three years later, in December 2015, Mr Doyle notified ASIC he had sold those same 50,000 Nuix shares to his brother Ross Doyle in Switzerland in July 2012. This was six weeks before he owned the shares.

Despite having apparently sold the shares to his brother for $326,000 some three years earlier, booking a $24,500 capital gain, Nuix continued to produce internal and external documents which showed Mr Doyle still owned the shares up until 2015, when their value had jumped to $4 million.

On the day the company was listed on the ASX in December 2020, Ross Doyle was listed as Nuix’s 14th largest shareholder with 2 million shares, worth $10.6 million at the $5.31 issue price.

That same day Mr Doyle and his wife Liza Choa-Doyle splashed out on a $4.6 million penthouse in Pyrmont, on the fringes of Sydney’s CBD.

Last week, the market was informed by the Nuix board that Mr Doyle was being “terminated by mutual agreement”.

The Sydney Morning Herald and The Age do not suggest Dr Castagna and Mr Doyle were the subject of Thursday’s raid.

Nuix provides the software platforms that regulators, police investigators and tax officials around the world use to run top-sensitive investigations.

The company’s shares took off like a rocket when it floated in December, more than doubling its share price. Macquarie Group booked a half-billion dollar profit when it used the float to sell down its stake in Nuix from 76 percent to 30 per cent.

But only months after the float the share price had crashed 65 percent, wiping $2.4 billion from the company’s market value and seeing angry investors consulting with class-action law firms.

He did not address the recent controversies which have engulfed the company.

“We deal with unstructured data .. and we do it with forensic accuracy and chains of custody which means a lot of what we do produces non-disputable evidence that ends up in a courtroom or regulatory compliance investigation,” said Mr Vawdrey.