"Congratulations to @ElonMusk and the @SpaceX team on their successful Inspiration4 launch last night," Bezos tweeted Thursday afternoon. "Another step towards a future where space is accessible to all of us."

Proctor, a 51-year-old entrepreneur, educator and trained pilot, was born in Guam, where her father was working at the NASA tracking station during the Apollo missions. Meanwhile, Arceneaux is a 29-year-old bone cancer survivor and physician assistant at St. Jude Children’s Research Hospital and Sembroski is a 41-year-old Lockheed Martin data engineer, United States Air Force veteran, and St. Jude donor. 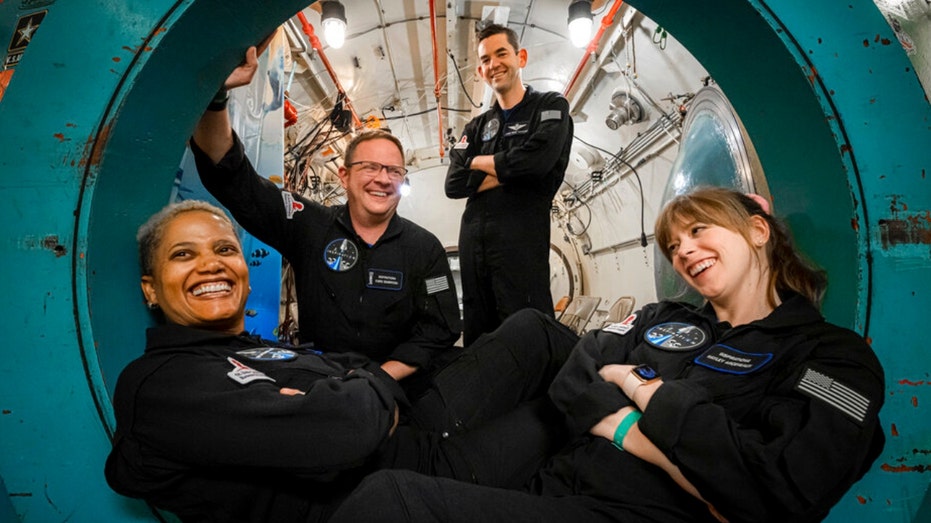 In this July 2, 2021 photo provided by John Kraus, from left, Sian Proctor, Chris Sembroski, Jared Isaacman and Hayley Arceneaux pose for a photo at Duke Health in Durham, N.C, during hypoxia training to understand how each crew member reacts in a lo (John Kraus/Inspiration4 via AP / AP Newsroom)

The mission, which will last for approximately three days, is targeting an altitude of about 360 miles, the farthest for any human since the Hubble Space Telescope repair missions. The crew will orbit Earth every 90 minutes along a customized flight path that will be carefully monitored by SpaceX mission control.

Traveling weightless at over 17,000 miles per hour, the crew of four will conduct experiments designed to expand our knowledge of the universe. Crew Dragon’s 365 pounds of cargo capacity includes crew essentials and scientific equipment dedicated to micro-gravity research and experimentation.

During the mission, the crew will partake in a first-of-its-kind health research initiative in partnership with Baylor College of Medicine's Translational Research Institute for Space Health and investigators at Weill Cornell Medicine to increase humanity’s knowledge on the impact of spaceflight on the human body.

The lawsuit comes after protests by Blue Origin and Dynetics, which accused NASA of giving preferential treatment to SpaceX during the HLS selection process, were denied by the Government Accountability Office in July. GAO ruled that the protests failed to establish "any reasonable possibility of competitive prejudice." 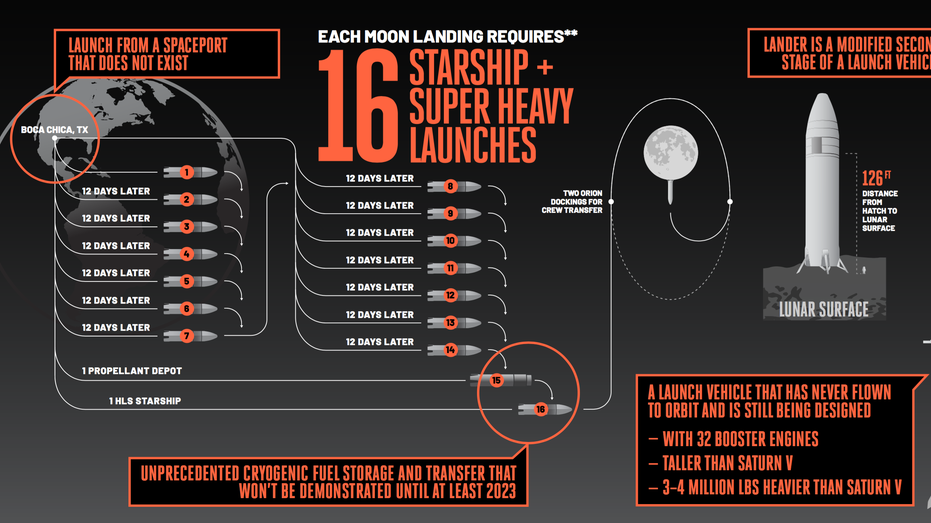 Blue Origin has released a revised infographic attacking Starship, claiming the spacecraft would be an “immensely complex and high risk” for NASA due to the fact that it has “never flown to orbit and is still being designed.” Blue Origin also claims (Blue Origin)

In addition to the lawsuit, Blue Origin distributed an infographic on social media attacking Starship's capabilities, prompting a war of words with Musk. Bezos also offered to cover over $2 billion of NASA's costs in exchange for a second HLS contract.

Though NASA's Artemis program said it was aiming to send astronauts back to the moon as early as 2024, a report by the agency's inspector general in August determined the timeline is "no longer feasible" due to several factors, including delays in the development of flight-ready spacesuits, the Space Launch System rocket, the Orion capsule, and the lunar lander. The spacesuits are not expected to be ready for flight until April 2025 at the earliest, according to the watchdog.

NASA confirmed in August that work under the Human Landing System contract would be temporarily paused after parties agreed to resolve the litigation with Blue Origin by Nov. 1.

Though Blue Origin did not receive NASA's HLS contract, the company has been awarded a $25.6 million contract to develop moon lander concepts for future Artemis missions.