Sen. Rand Paul (R-Ky.) says that his failure to properly disclose his wife’s pre-pandemic investment into an antiviral drug initially used to treat COVID-19 patients was an honest mistake.

But the late disclosure, which Paul finally lodged Wednesday 16 months after it was due, has nevertheless raised new questions about what he knew and when, especially given that the Kentucky Republican has served as one of Washington’s most ardent skeptics of masks and other government measures meant to slow the virus’s spread since the beginning of the pandemic last year. And it has once again highlighted the weakness of federal laws meant to prevent members of Congress from trading on insider knowledge, and generated calls to strengthen those provisions or ban lawmakers from trading individual stocks outright.

Paul’s wife, Kelley Paul, purchased between $1,000 and $15,000 of stock in Gilead Sciences in February 2020, weeks before the World Health Organization declared the spread of COVID-19 a global pandemic, The Washington Post reported Wednesday. Gilead manufactures remdesivir, an antiviral treatment health officials recommended as a potential COVID medication during the pandemic’s early stages. (The World Health Organization later advised against using the drug.)

There is no concrete evidence that Paul’s wife bought the stock because she realized early on — through her husband — that the COVID pandemic was real and would necessitate massive intervention from companies like Gilead, though it’s notable that this is the only instance in 10 years where the Pauls purchased shares of an individual stock, as CNBC reported Thursday.

But the fact remains that while Paul was sowing doubt among millions that the pandemic was all that serious, his family was making investments that suggested he very much knew that it was. 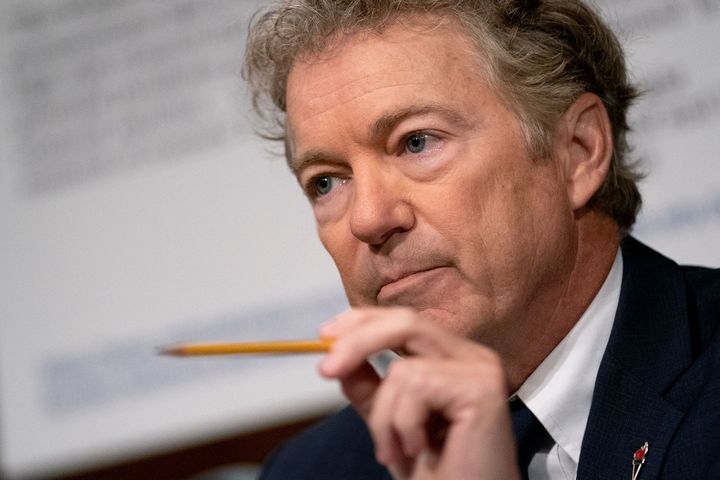 Paul, who was the first senator to test positive for COVID-19, was suspended this week from YouTube for seven days after claiming that “cloth masks don’t work” against the virus as a new variant pummels large parts of the country.

Paul has, like many Republicans, opposed the most basic of measures federal public health officials have recommended in an effort to slow the spread of the virus since the beginning of the pandemic, including mask mandates, social distancing requirements, and restrictions on in-person public gatherings. He has compared Kentucky Gov. Andy Beshear’s (D) restrictions to Soviet-style socialism, and this year accused Beshear of being “drunk with power” for favoring mask mandates and other policies that state health officials have credited with helping Kentucky avoid the more explosive outbreaks that occurred in neighboring states.

Other aspects of his opposition have diverged into outright misinformation about masks and vaccines: Unlike Kentucky’s other GOP senator, Senate Minority Leader Mitch McConnell, Paul has said he would not get vaccinated unless research showed that it was necessary for people who had already been infected, adding that “Big Brother” could not force him to take the shot.

He has not changed his tune even as health experts have explicitly said that people with prior infections do not have sufficient protections against the virus and should get vaccinated, effectively positioning himself as an official source of vaccine skepticism at a time when case numbers are rising and public health officials are desperately trying to boost inoculation rates.

Paul has also used Senate Health Committee hearings to wage an ongoing war against Dr. Anthony Fauci. Paul has challenged Fauci over the usefulness of masks, social distancing policies and restrictions on businesses; suggested that herd immunity is more effective than mitigation measures; and questioned Fauci over whether the NIH funded “gain-of-function” research at a lab in Wuhan, China ― a suggestion meant to bolster the “lab leak” theory of the virus’s origin, and that Paul has attempted to use to undermine faith in government health experts’ response to the pandemic.

“Senator Paul, you do not know what you are talking about,” Fauci said during a hearing last month, in a response that matched the tenor of those from previous encounters.

Roughly 54% of Kentucky’s population is fully vaccinated. Beshear this week implemented new restrictions meant to slow the spread of the delta variant, which is battering Kentucky: The state reported 2,961 new cases on Wednesday, including 611 among people under the age of 18, and 14 new deaths. The daily case number was Kentucky’s highest since January.

Nevertheless, Paul called on Kentuckians and Americans to “resist” mask mandates and other restrictions, saying that “they can’t arrest all of us.” He called his suspension from YouTube a “badge of honor” and reposted the video claiming that cloth masks are ineffective to another channel popular among conservatives. Research has shown that while cloth masks may not be as effective as N95 masks, they are still useful for preventing the spread of the virus, and the Centers for Disease Control and Prevention recommends their use over going unmasked.

That members of Congress are allowed to purchase and trade individual stocks creates myriad potential problems for accountability and oversight, especially because they are not subject to the same conflict of interest laws that govern executive branch employees. In 2012, Congress enacted the STOCK Act, a federal law meant to thwart insider trading and bring minimal transparency to lawmakers’ financial trades by requiring them to disclose stock purchases within 45 days.

“The only way we can really assess their conflicts of interest is through public disclosure,” said Virginia Canter, the chief ethics counsel for Citizens for Responsibility and Ethics in Washington, a nonprofit watchdog group. “If they don’t disclose, we’re not able to do the requisite policing.”

Paul’s failure to comply adds him to a list of senators ― including Sens. Dianne Feinstein (D-Calif.), Richard Burr (R-N.C.), Jim Inhofe (R-Okla.) and former Sen. Kelly Loeffler (R-Ga.) ― who have faced scrutiny over personal and family stock dealings in the days and weeks before the dangers posed by COVD-19 were publicly known.

The Senate Ethics Committee, which has not sanctioned a sitting member since 2007, ultimately cleared the senators of wrongdoing. The Department of Justice later dropped insider trading investigations without filing charges. But that may be a result of the weakness of laws governing lawmakers’ investments, rather than proof that everything they’re doing is on the up-and-up.

“We need to strengthen our laws to bar [members of Congress] from trading individual stocks, and to prevent them from the temptation of trading on nonpublic information,” Canter said. “If they can’t meet these disclosure requirements, they shouldn’t be trading in stocks at all.” 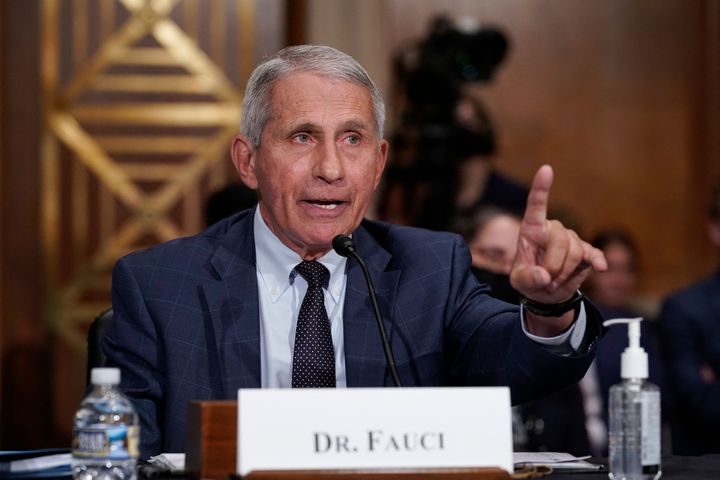 Kelsey Cooper, a spokesperson for Paul’s Senate office, told the Washington Post and other outlets Wednesday that Paul completed the disclosure form on time but failed to submit it, and that he reported the issue to the Ethics Committee immediately upon discovering it while preparing an annual disclosure. Cooper also said that Paul had not attended briefings in which information about remdesivir’s potential efficacy as a COVID treatment would have been discussed, and that Kelley Paul ultimately lost money on the investment. (While Gilead stock is trading at a lower price today than it was when Kelley Paul purchased it, she has not yet sold the stock, according to CNBC, which means she has not yet made or lost money.)

But ethics experts and government watchdogs aren’t buying that explanation.

“Accepting his failure to timely file his [disclosure] as merely an oversight requires an assumption that he was not aware of the intense public scrutiny that his colleagues Senators Richard Burr, Dianne Feinstein, and Kelly Loeffler faced in 2020 when their stock trades at the same time in February were revealed,” attorneys for the Campaign Legal Center, a watchdog group, said in a Thursday complaint that requested a Senate Ethics Committee investigation into Paul’s late disclosure.

Paul’s presumptive Democratic opponent in next year’s Kentucky Senate race went further, calling on Paul to resign for misleading Kentuckians throughout the pandemic while failing to disclose a potential financial stake in drugs used during it.

“As this pandemic raged and more lives were lost, he sought the opportunity to put money in his pocket,” former state Rep. Charles Booker, the only major Democrat to launch a Senate campaign against Paul so far, said in a video posted to Twitter on Wednesday. “This is so egregious that … for the safety of our country, this commonwealth [and] our future, Rand Paul needs to resign immediately.”

Paul has made his career railing against the supposed ineffectiveness and corruption of big government, but episodes like the one he’s now the central character in play a massive role in undermining public trust in elected officials, especially during a crisis as large as the pandemic. Whether his family tried to use inside information about the pandemic to make a profit or not, the investment makes it clear that penalties for failing to disclose such transactions should be stronger, the Campaign Legal Center said in its request for an investigation.

“When members of Congress trade stocks and fail to disclose those trades, they break the law and diminish the public’s trust in government,” the Campaign Legal Center said in its filing. “As members of Congress craft laws that directly impact the lives of all Americans, the public must be able to trust that elected officials are acting in the public’s interest, and not in their own financial interest.”