The Fire HD 10 Plus with wireless charging station. (Photo: Amazon)

Tablets are in a really weird place. Our smartphones pretty much do everything we want. If we need to get work done, even though there’s attachable keyboards for iPads and other tablets, most of us will choose from a wide range of laptops.

It’s especially important to figure out what you want from a tablet. In the case of Amazon’s Fire HD Plus, if you want a tablet with a great screen, access to all your video entertainment options and books, and a pretty affordable price, then look no further.

However, as nice as it is living within the Amazon ecosystem, it does have its limits.

Before we dig into that, let’s start with the tablet itself, which I’ve been testing out with both a wireless charging dock and Fintie detachable keyboard case that’s part of its productivity bundle (which also includes a 12-month Microsoft 365 Personal subscription).

The Fire 10 HD Plus packs a gorgeous 10-inch HD screen, yet it doesn’t feel big at all.

At 10.1 inches, it’s slightly smaller than the 10.2-inch iPad and 10.9-inch iPad Air. Still, it’s light and compact.The Fintie does add considerable bulk and weight, though.

It’s zippy, too. Flipping between apps is effortless. There’s also a split-screen option allowing you to use two apps at once, such as writing an email while having a browser open.

The real draw of the Fire 10 HD Plus is as an entertainment device. Between the screen and support for Dolby Atmos audio, watching movies and TV shows is delightful, whether it’s Amazon’s own Prime Video or competitors including Netflix, Hulu or HBO Max. There’s also the treasure trove of books elegantly handled through Amazon’s Kindle app.

It’s available with 32 GB of storage for 179.99, or $219.99 for 64 GB. Either model lets you add a microSD card to bump up storage to as high as 1 TB. Amazon is also selling the Fire 10 HD Plus bundled with the charging dock or the detachable keyboard case for $40 more. 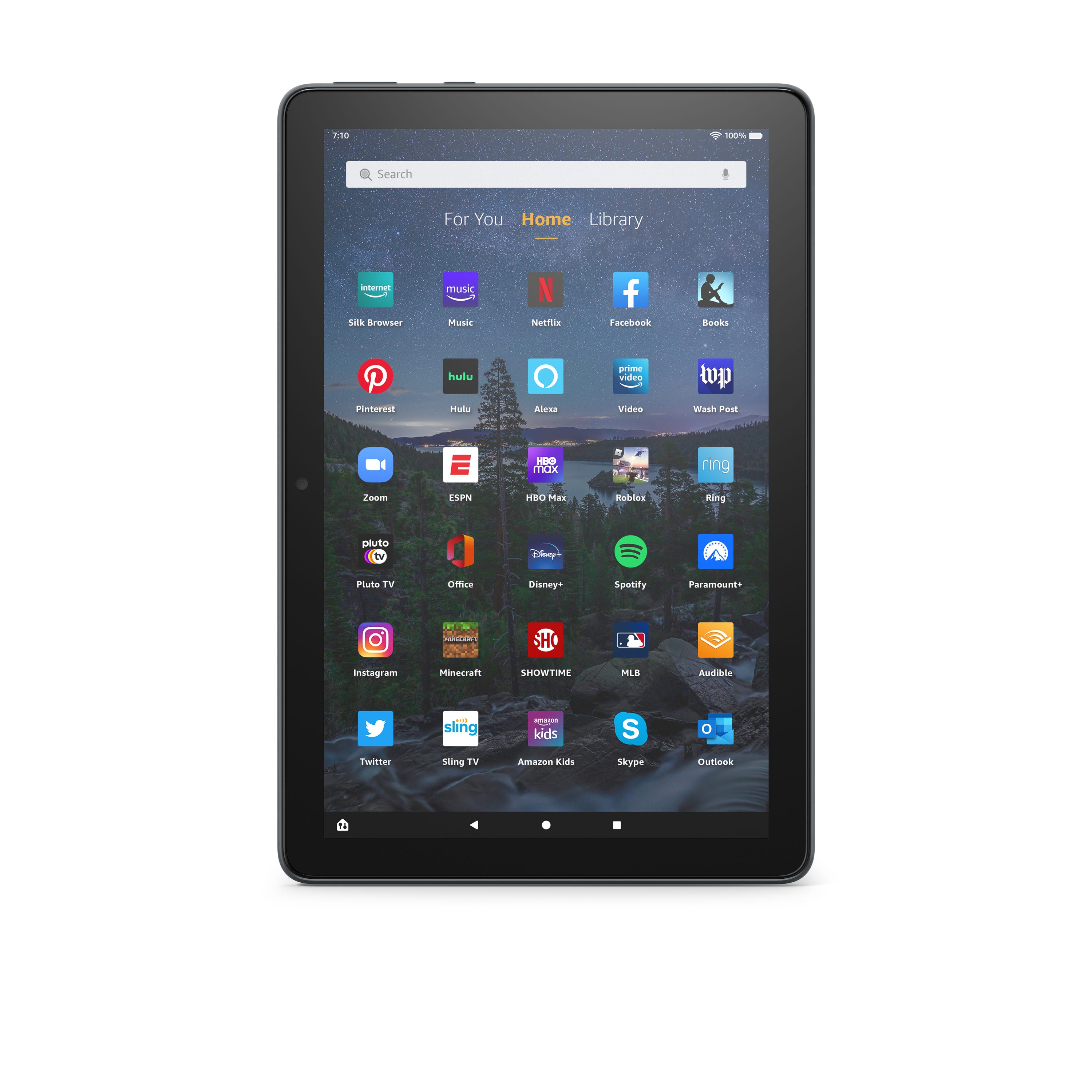 There is potential for using your Fire 10 HD Plus beyond entertainment. It supports Microsoft products like Office, Teams and Skype, as well as Zoom, if you want to use it for business.

The Fintie case with keyboard suits the tablet well. It connects by Bluetooth, and users can detach it if they want to use the Fire HD as a traditional tablet. But it’s important to keep in mind that these keyboards, like many aimed at tablets, can feel cramped compared to a standard keyboard for a desktop or laptop.

When paired with the charging dock, owners can not only wirelessly power up your tablet, but transform it into an Echo Show-style device. A display pops up with the weather, news items, recipes or other customizable details. The tablet also supports using digital assistant Alexa hands free. Amazon says you can fully charge the tablet in as little as 3.5 hours.

Here’s the problem, and it applies to all of Amazon’s tablets: you are stuck with Amazon’s app store. It has most of the big names you’d expect: Netflix, TikTok, Facebook, Hulu, Candy Crush Saga, and others. But Amazon’s app store is not anywhere as robust as Apple’s App Store or Google Play.

There is also a notable absence from Amazon’s marketplace: Google. So, no YouTube app or any other Google apps. Amazon’s Silk browser handles some Google services smoothly, such as YouTube and YouTube TV. However, if you rely on productivity apps like Google Docs, they don’t seem to work.

If you’re seeking an affordable alternative to an iPad or Microsoft’s Surface line, the Fire HD 10 Plus will serve you well. But only if you really want it.