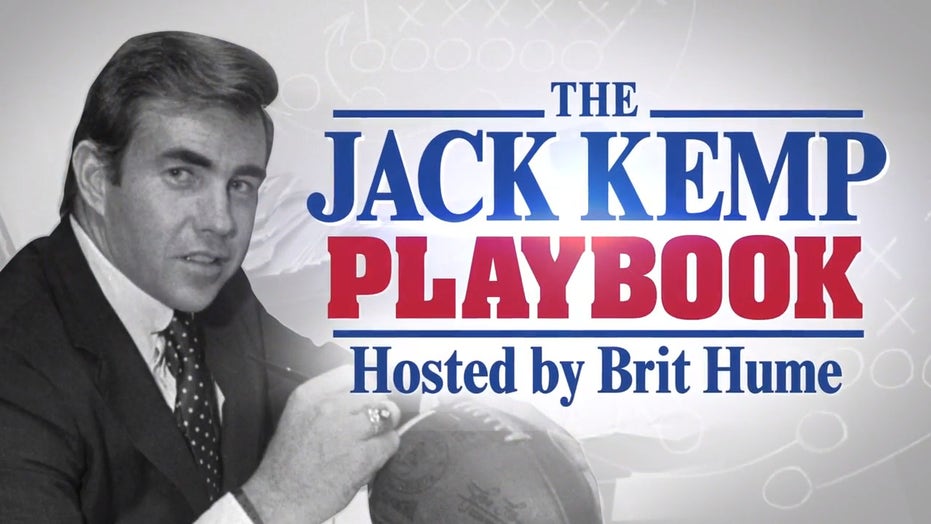 Watch Fox Nation's "The Jack Kemp Playbook, hosted by Brit Hume," which examines the remarkable life of Jack Kemp — the star NFL quarterback turned U.S. congressman. A tax-cut evangelist with innovative ideas, who bonded with Democrats while becoming one of the most influential Republicans never to be president.

Facing a pandemic, a tough economy, urban unrest and lagging in the polls, Donald Trump should be working hard to outline a second-term agenda to salvage his bid for reelection. Yet even many Republicans say they have little or no idea what the president hopes to accomplish if things turn around and the vote goes his way in November.

One answer for Trump – and the GOP as a whole – may be to revisit the ideas that propelled Republicans into the White House more than a generation ago, setting the stage for an economic boom at home and a peaceful ascendancy over the old Soviet Union.

No one better expressed or more embodied the spirit of that time than Jack Kemp, the California-born football star turned upstate New York congressman, who played a key role in developing the foundational ideas for the Reagan Revolution. Kemp also inspired a coterie of conservative thinkers and policymakers. As luck would have it, Trump is now surrounded by some of them.

Larry Kudlow, Steve Moore, Arthur Laffer, Keven Hassett – to name just a few – worked with Kemp and helped write his playbook.  As South Carolina Sen. Tim Scott said, “My hero, my mentor, my model in politics has always been Jack Kemp. He is the man, the myth and the legend.”

Back when he represented a congressional district from Indiana, Mike Pence proclaimed on the floor of the House, “I have always been and will always be, first and foremost, a Jack Kemp Republican.”

DAVID BOSSIE: TRUMP VS. BIDEN POLLS – HERE'S WHAT YOU NEED TO KEEP IN MIND

All of which means it is a good time to revisit the life of Jack Kemp, who has been described as the most influential modern Republican who never reached the Oval Office – and may once again provide the ideas for a Republican revival.

Kemp stepped onto the national political stage at a time when Americans – and Republicans in particular – were ensnared by problems rivaling, if not surpassing, those we face today.

The 1970s were marked by failure in Vietnam, Soviet expansion in this hemisphere and around the globe, the Watergate scandal, urban riots, gas lines, the fall of the shah of Iran and the birth of radical Islam. Bubbling underneath it all was a U.S. economy wracked by stagflation – the seemingly unexplainable phenomenon where, even as employment and productivity went down, prices kept climbing.

The world was ablaze; the GOP seemed out of ideas. Much like today, the intellectual energy in the Western world was on the left: central planning, higher taxes and more government intervention were the favored remedies, socialism the overall prescription.

In terms of electoral politics, Democrats held a seemingly unbeatable hand against a defeated and yet hardened GOP – a juxtaposition Kemp described in stark terms.

As he told it,  "Liberals have always had their thesis: spend more money, redistribute wealth, and finance it through deficits. And they loved to hand out public monies. They were Santa Claus."

"And conservatives would come along and say, ‘Oh, no, no, no, we can't spend money. We can't do that. We're against this. We're opposed to that.’ And we ended up sounding like Scrooge. Now, you put Santa Claus up against Scrooge, and Santa Claus will win 44 out of 50 years of congressional politics.”

Kemp’s goal became to find an antithesis that could match the paradigm of a “liberal Santa Claus.” His answer is often described as “supply-side economics,” but that is too narrow a lens if you want to understand the full impact of his ideas.

For Kemp, politics was not about personal advancement or attack, but about imagining policies, testing them, and moving forward.

Broadly, his agenda is better understood as “empowerment” – the idea that the modern state, no less than its predecessors in centuries past – exists to protect personal freedom and create an environment where individuals can reach their full potential.

In Kemp’s view, Democrats could offer government goodies; Republicans would offer an unshackled path toward the American Dream. Ronald Reagan understood the vision – and rode Kemp’s ideas all the way to the White House.

Importantly, especially in the current moment, Kemp’s empowerment agenda also promised to raise up the poor and provide minorities with their shot at the American Dream. No Republican has ever stood as boldly for racial equality, and none did more to design policies with the explicit aim of solving the problems of the inner cities.

Taxes, education, housing – Kemp saw them all as levers to create incentive-based programs that would attack poverty head-on, while fortifying the role of the individual.

Finally, crucially relevant in this era of highly personalized partisan nastiness, Jack Kemp believed that politics was primarily a competition of ideas. For him, politics was not about personal advancement or attack, but about imagining policies, testing them, and moving forward. As a former professional athlete, he knew what it was to fight hard on the field, but he also knew that at the end of the day’s struggles, the game wasn’t personal.

Many believed that his equanimity was his fatal flaw. As his friend Bill Bennett told us, “I told Jack once that if he believed in original sin and acted that way, he’d be president.”

But in the end, Kemp accomplished more for his party – and for his empowerment agenda – by hewing to the high road, often to the vexation of those around him.

“He believed in the fundamental goodness of everyone,” recalls Wayne Berman, who managed Kemp’s 1996 vice presidential bid. ”And that made him both the most admirable and most frustrating politician I ever worked with, often at the same time.”

What are the practical elements of a Kemp Agenda for 2020 and beyond?

Low taxes for sure. Further deregulation of the economy, perhaps. A foreign policy that uses all the levers of diplomacy to promote American values and defend human rights. But just as important, it is a rededication to the idea of racial reconciliation, personal empowerment, and the kind of can-do attitude that remains the basis for so much of the American character.

If Trump, or any Republican, wants to triumph in November and beyond, revisiting the Jack Kemp playbook, updating it appropriately and executing it vigorously – should be an important first step.

Watch Fox Nation's "The Jack Kemp Playbook, hosted by Brit Hume," which examines the remarkable life of Jack Kemp — the star NFL quarterback turned U.S. congressman. A tax-cut evangelist with innovative ideas, who bonded with Democrats while becoming one of the most influential Republicans never to be president.