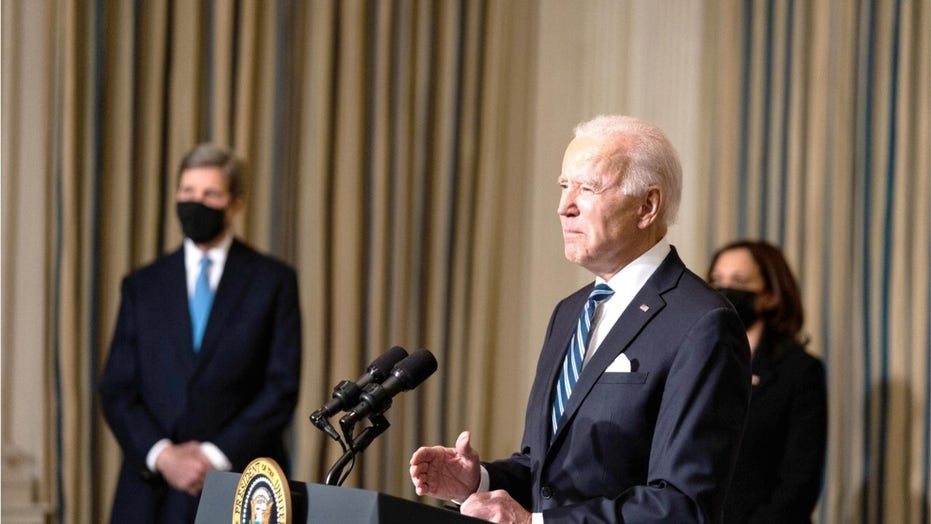 Neal Crabtree, formerly a welding foreman on the Keystone XL, was ‘very disappointed’ in the new climate policies announced by the Biden administration Wednesday.

Advocates for the Green New Deal have praised the Biden administration for its early moves to address climate change, taking a victory lap after the president signed a slew of sweeping executive orders targeting the environment.

The array of directives that Biden signed include pausing new federal oil leases, rejoining the Paris climate agreement, eliminating lucrative subsidies for the fossil fuel industry, revoking permits for the Keystone XL Pipeline and converting the government’s fleet of vehicles to electric power.

Biden called the spate of orders part of an effort to “supercharge our administration’s ambitious plan to confront the existential threat of climate change.”

BIDEN SIGNS CLIMATE CHANGE ORDERS AMID CONCERNS OVER JOBS: ‘IT IS TIME TO ACT’

Although Biden did not campaign on the Green New Deal — an ambitious proposal unveiled in 2019 by Rep. Alexandria Ocasio-Cortez and Sen. Ed Markey that calls for net-zero greenhouse gas emissions across the economy by 2030 — he described it as a “crucial framework” to his plan.

Progressive lawmakers pledged to push Biden further to the left on the issue — and took credit this week for the early actions undertaken by the president.

“It’s almost as if helped shape the platform,” Ocasio-Cortez tweeted in response to an NBC News report comparing the similarities between Biden’s executive orders and the Green New Deal.

During an interview on MSNBC, Ocasio-Cortez, D-N.Y., said she was “extraordinarily encouraged” by Biden’s actions so far, which she said signifies “a good faith openness and relationship” to environmental activist organizations.

“It communicates that he meant what he said on the campaign trail that he would make climate change a central priority of his administration,” she said.

BIDEN HAS SIGNED 40 EXECUTIVE ORDERS AND ACTIONS SINCE TAKING OFFICE

Other progressive lawmakers joined Ocasio-Cortez in lauding the president for the executive action on climate change.

Rep. Ilhan Omar, D-Minn., noted that as a progressive it’s “easy to become jaded about the possibility of meaningful change.” But she said in his first week in office, Biden had acted on “many of progressives’ top asks,” including revoking the Keystone XL Pipeline permit, putting a moratorium on oil and natural gas leases and reinstating vehicle emission standards.

“And if we truly want to reform our democracy, rebuild our economy, and address the climate crisis, we have to start by ending one of the most anti-democratic elements of our broken system: THE SENATE FILIBUSTER,” she wrote. “Let’s keep pushing for bold change, even as we celebrate our wins.”

The Sunrise Movement, the environmental group that has endorsed the Green New Deal, also praised Biden for the early action, but warned that it’s “Just the beginning of what we need to fully address.”

“Seeing this type of action from the Biden administration is great but also just the beginning of what we need to fully address and stop the climate crisis,” the organization tweeted. “Our movement isn’t going anywhere @joebiden.”

Biden’s executive actions on climate change have not been without criticism: One independent oil group has already sued the administration. Texas Gov. Greg Abbott has also pledged to fight the White House’s climate agenda.

“We’re here for a singular purpose today. To make clear that Texas is going to protect the oil and gas industry from any type of hostile attack launched from Washington, D.C.,” Abbott said to industry leaders during a roundtable meeting in Odessa, Texas.