Apple’s long search for a marquee Melbourne store may be nearing an end with the tech giant considering a space in Bourke Street Mall, a move that could help revive the city’s pandemic-weary retail heart.

The world’s largest tech company has searched unsuccessfully for a flagship location in central Melbourne for 15 years, but because its store requirements are so onerous few buildings match. 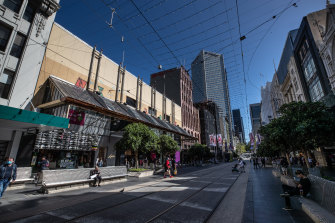 Apple is considering opening a flagship store in the Bourke Street Mall.Credit:Jason South

Six years ago, it was in the final stages of negotiations to build a $50 million stand-alone megastore on a high-profile location in Federation Square, only to see its hopes for an extravagant see-through glass landmark dashed when its plans provoked a strong public backlash.

The company, famed for its iPhones and iPads, is now in discussions with the owner of a prime Bourke Street Mall building, according to industry sources who declined to be named because of confidentiality.

If negotiations are successful – and with Apple’s history in Melbourne that’s no certainty – the tech giant may open a trademark, gleaming, glass-box shopfront in the Centrepoint building next to the signature David Jones Menswear store.

Neither Apple nor Centrepoint would confirm if discussions are underway.

“Apple has made no announcements with regard to future stores,” a spokesman for the group said. “No comment,” said Centrepoint’s manager Jason Hopp when asked about a potential deal.

“We’re supporting our long-term tenants as best we can. We’re trying to keep the building fully occupied by putting pop-ups in,” he said.

The Mall, the city’s main pedestrian shopping thoroughfare, has taken a battering after two years of pandemic lockdowns drove shoppers and city workers out of the city centre precipitating a severe slump in foot traffic, the main source of retailers’ income. 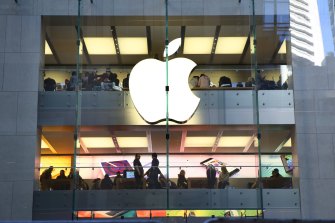 As a result, a swathe of well-known names who occupy key tenancies in the Mall are on the move.

The lure of shoppers flocking to Bourke Street made it the location of choice for well-resourced international fast fashion brands H&M and Zara when they first hit Australia’s shores. They haven’t budged since.

Ginnane Associates retail consultant Martin Ginnane said the change in tenancies underway in the Mall is being accelerated by the pandemic, but it would have come anyway.

It’s the next cycle that’s kicking off. Bourke Street Mall hasn’t reinvented itself for years.

“It’s the next cycle that’s kicking off. Bourke Street Mall hasn’t reinvented itself for years. It has stayed pretty stagnant,” he said. “There’s a lot of pain being felt at the moment, but out of the pain will come a lot of change.”

The Mall’s rejuvenation is already in train.

A major redevelopment of The Walk arcade, now under construction directly opposite Myer’s department store, will add a 453-room dual-branded hotel to a mix of new shopfronts that will stretch between Bourke and Little Collins streets.

Property fund manager Newmark Capital has signed beauty retailer Mecca as a flagship tenant to take over the David Jones Menswear store after purchasing the building for $121 million from the department store’s South African owner in the middle of the pandemic.

Newmark’s $22.55 million renovation will add three rooftop terraces for office tenants across five upper floors and a 2245 square metre supermarket in the basement.

Centrepoint has indicated it may also add a major overhaul of its building to the mix.

Mr Hopp said the group was monitoring developments in the Mall. “We do have the intent of seeking new tenants through a redevelopment. We might be the next cab off the rank,” he said.