Given the company’s outstanding run since first reaching a market cap of more than $1 trillion in August of 2018, wondering why Apple Inc.’s (NASDAQ: AAPL) market cap hasn’t been able to pin its capitalization above $2.3 trillion may seem a bit churlish, a variation of the old query, “What have you done for me lately?” 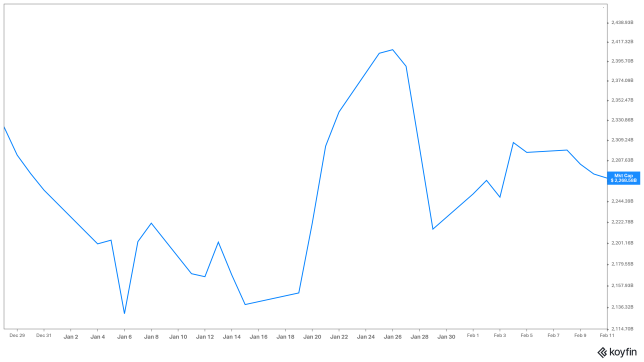 The riot at the U.S. Capitol on January 6 sent the stock price to its lowest level in nearly a month, and the company’s market cap fell with it to about $2.13 trillion. The political fallout from that event hit Apple’s shares harder than any of the major indexes. On January 6, Apple shares had lost more than 4% since December 28, while the Dow Jones industrials and the S&P 500 traded up by around 2%.

While anticipation of the company’s fiscal first-quarter report added more than 8% to Apple’s share price, Apple’s record-breaking report on January 27 actually sent shares down more than seven points. Investors seemed to think that $111 billion in revenue was not enough.

The downturn also may result partly from the fact that Apple no longer gives formal guidance. Historically, March quarter revenue falls off by about a third sequentially. Apple’s chief financial officer did say that the company expects the current quarter to be in line with the historical pattern. That could have caused some investors to back away from the stock.

Then on February 1, Apple filed with the U.S. Securities and Exchange Commission (SEC) for a debt offering of some $14 billion. The company has said that it intends to become cash neutral in the future, meaning that its cash total will equal its total debt. To reach that goal, Apple will be doling out some $84 billion in cash through buybacks and dividends over the next several years. Because Apple is a cash-generating machine, the expected cash gravy train may not be “fully appreciated,” as Loup Ventures analysts Gene Munster and Andrew Murphy put it.

Since the beginning of the month, news of a possible deal with Hyundai-Kia to build an Apple Car (talks eventually fizzled) and a battle with Facebook over a coming privacy feature in iOS have mostly kept the market cap within a tight range between $2.3 trillion and $2.27 trillion.

That range represents roughly 1.3% of Apple’s market cap. Only 381 U.S.-traded companies have market caps greater than $30 billion. Apple stock doesn’t have to move much to create or annihilate the equivalent of another company that would fit in the Fortune 500.

It takes big news to move Apple’s stock a leg higher and, for the present at least, that big move hasn’t arrived. Discussions with other automakers regarding an Apple Car are likely continuing, and that would be a big move, just as the release of the 5G-compatible iPhone 12 was a major move and contributed a lot to the company’s record-breaking first fiscal quarter.