SEATTLE ― In March, the coronavirus pandemic was starting to unfold, and the Green Light Project, a nonprofit that provides cash and sanitation products to low-income sex workers, was running short on hand sanitizer.

The price had been creeping up since January. Stores ran out, then online retailers, then wholesalers. Green Light Project volunteers had been scouring the internet and texting their friends to scoop up every last ounce they could find, but they were getting increasingly desperate.

“Other than condoms and pepper spray, hand sanitizer is the most important product for staying safe while doing sex work on the streets,” said a Seattle sex worker who asked not to be identified. Many street-based sex workers don’t have access to soap and running water between clients. In a typical week, the Green Light Project handed out more than 500 single-use packets of Purell.

By mid-March, the group was down to its last 15 packets. On March 10, after another night dipping into their dwindling supply, Sherae Lascelles, the Green Light Project’s founder and director, and a group of volunteers got drinks at a dive bar on North Aurora Avenue, in Seattle’s red-light district.

“Every single person was begging us for sanitizer,” Lascelles said. Workers were worried about catching COVID-19 but couldn’t self-quarantine because they needed income. Some had run out of sanitizer days before. “We kept saying, ‘There has to be another way.’”

And so, that night, their desperation gave rise to an idea: What if we make it ourselves?

“Sex workers don’t stop needing hand sanitizer just because we can’t find it in stores,” Lascelles said. “As sex workers, losing the resources other people rely on is nothing new to us. So we just decided that if no one else was going to make it, it was up to us.”

Lascelles (who uses they/them pronouns) has been a fixture in Seattle sex worker organizing for nearly a decade. They grew up in Spokane, a mid-sized city six hours east of Seattle, and have been engaged in various forms of sex work since they were a teenager. 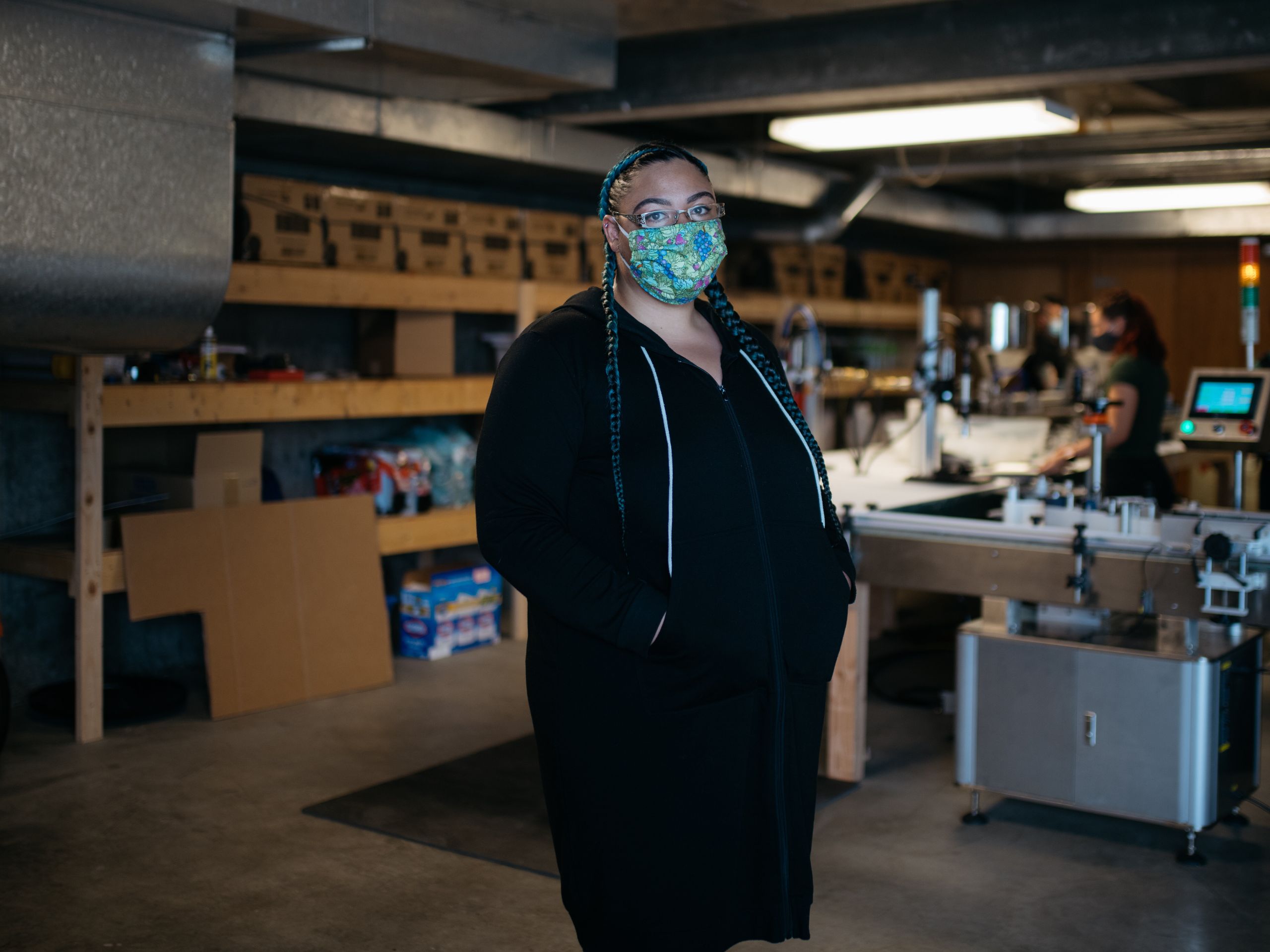 When Lascelles moved to Seattle in 2010, they got a job at a sex shop and eventually joined an advocacy group pushing for better policies on sex work in the city. Last year, they founded the People of Color Sex Worker Outreach Project and the Green Light Project, both dedicated to political advocacy and direct services for sex workers. This fall, they’re running for a seat in the Washington state House of Representatives.

But though Lascelles knew the importance of hand sanitizer for sex workers, they had no idea how to make it in bulk.

“We didn’t want to give people something we made in a bathtub,” they said. “This is a group that has always been marginalized and I didn’t want them to feel like they were being experimented on.”

Enter John Jensen. Five years ago, Jensen was a software engineer trying to quit smoking. He took up vaping, but all the flavors he could find lacked something.

So one night, in his kitchen, he made his own. He liked his homemade formula more than the commercial brands, and, it turned out, so did his friends. Jensen quit his software job, found a business partner — Colby Adam, a chemical engineer and a former Washington State Mr. Leather — and started making vape liquid full time.

Things didn’t work out for Jensen’s vape company, but he still had contacts in the chemical industry, knowledge of liquid production and leads on vendors for labels and bottles. He also had a girlfriend, Amanda Halverson, who had been volunteering for the Green Light Project for nearly a year and was with Lascelles at the dive bar the night they hatched the sanitizer plan.

Jensen was between jobs and the nightclub where Halverson worked as a stripper was shut down under Washington’s lockdown order, so they had time to research hand sanitizer recipes. The substance, they found, is remarkably simple: mostly alcohol, plus glycerin for moisture, polyacrylate for texture and topped off with water. All the ingredients are safe to handle and available in bulk online.

Jensen (with some help from Adam, his former collaborator), consulted recipes and started making test batches. The World Health Organization’s formula, it turned out, was too thin: It had a watery consistency that would evaporate before sex workers could put the bottle back in their pocket. Jensen started reading the labels of Purell and GermX bottles to find out how they got their texture. 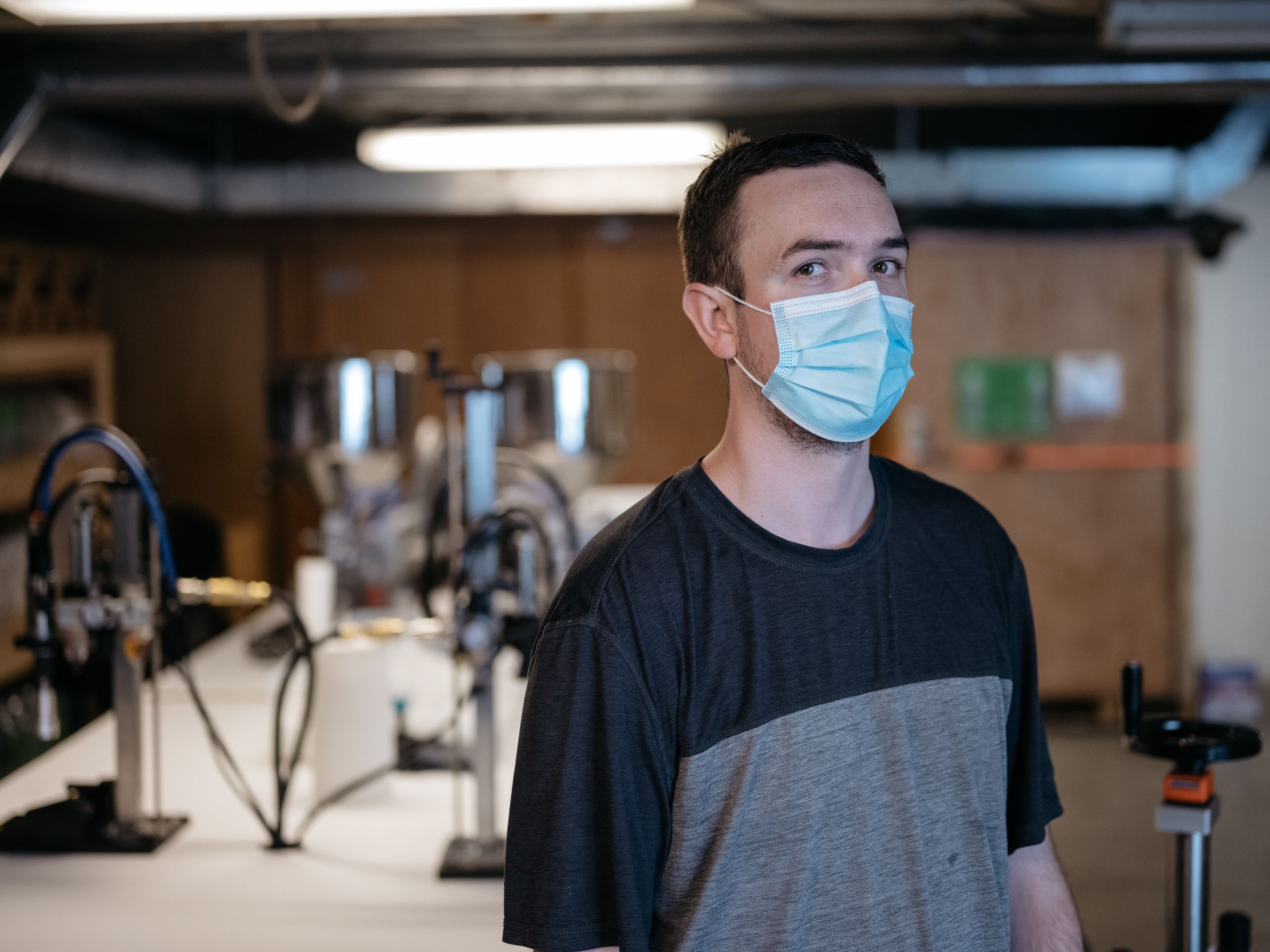 “We had to chase the thickener all the way up the supply chain to a company in France,” he said. “There was no website and no ads to check out. We had to call them directly, then send a purchase order with our banking info. It was like ordering from a catalog in the 1980s.”

Once the thickener came in, they settled on their recipe. Most hand sanitizers are around 63% alcohol, but they decided to use a stronger 70% mixture in case workers needed to water it down to make it last longer. They also skipped artificial fragrances that could irritate users’ skin if they had allergies.

Next, they started looking for suppliers. There was a nationwide demand spike for sanitizer, and dozens of other companies were looking for the same ingredients.

“No one wanted to sell to us because they thought we were going to jack up the price and resell it,” Jensen said. He had to call each supplier individually and convince them the ingredients were for a product they would be giving away.”

The first few weeks, he said, were a constant back and forth between finding and losing suppliers. “Vendors were running out of their own supplies, or all of a sudden they decided to sell all their stock to first responders, health care workers or the government. They were saying, ‘We’ll ship it today,’ then it became tomorrow, then it became, ‘Sorry, half our staff called in sick.’”

Still, just eight days after they first came up with the idea, the trio managed to scrape together all the ingredients they needed for their first batch. Jensen and Halverson spent hours sanitizing their kitchen, then mixed the ingredients in paint buckets. They used a blender to mix the thickener with water and a power drill fitted with a whisk attachment to stir the buckets. After a few hours, they had 4 gallons of sanitizer, enough for about 250 2-ounce bottles.

Lascelles and a team of volunteers started handing out the homemade sanitizer (along with $20 bills) the next night.

“The response was overwhelming,” Lascelles said. “Some of our participants hadn’t been able to find sanitizer for a month.”

From Kitchen To Factory

Almost as soon as they made their first batch, Jensen and Halverson had already outgrown their kitchen. One afternoon in late March, Jensen visited an old friend — the chiropractor next door — and noticed the 3,000-square-foot office space in his building sitting vacant. Within a week, Jensen, Halverson and Lascelles had rented it.

Last week, the trio gave HuffPost a tour of their production facility, located in a squat brick square in a north Seattle strip mall. Roughly half of the businesses facing the street are defunct. Around back is a parking lot, a chiropractor’s office and the entrance to what they’ve dubbed Hygiene Hustle. 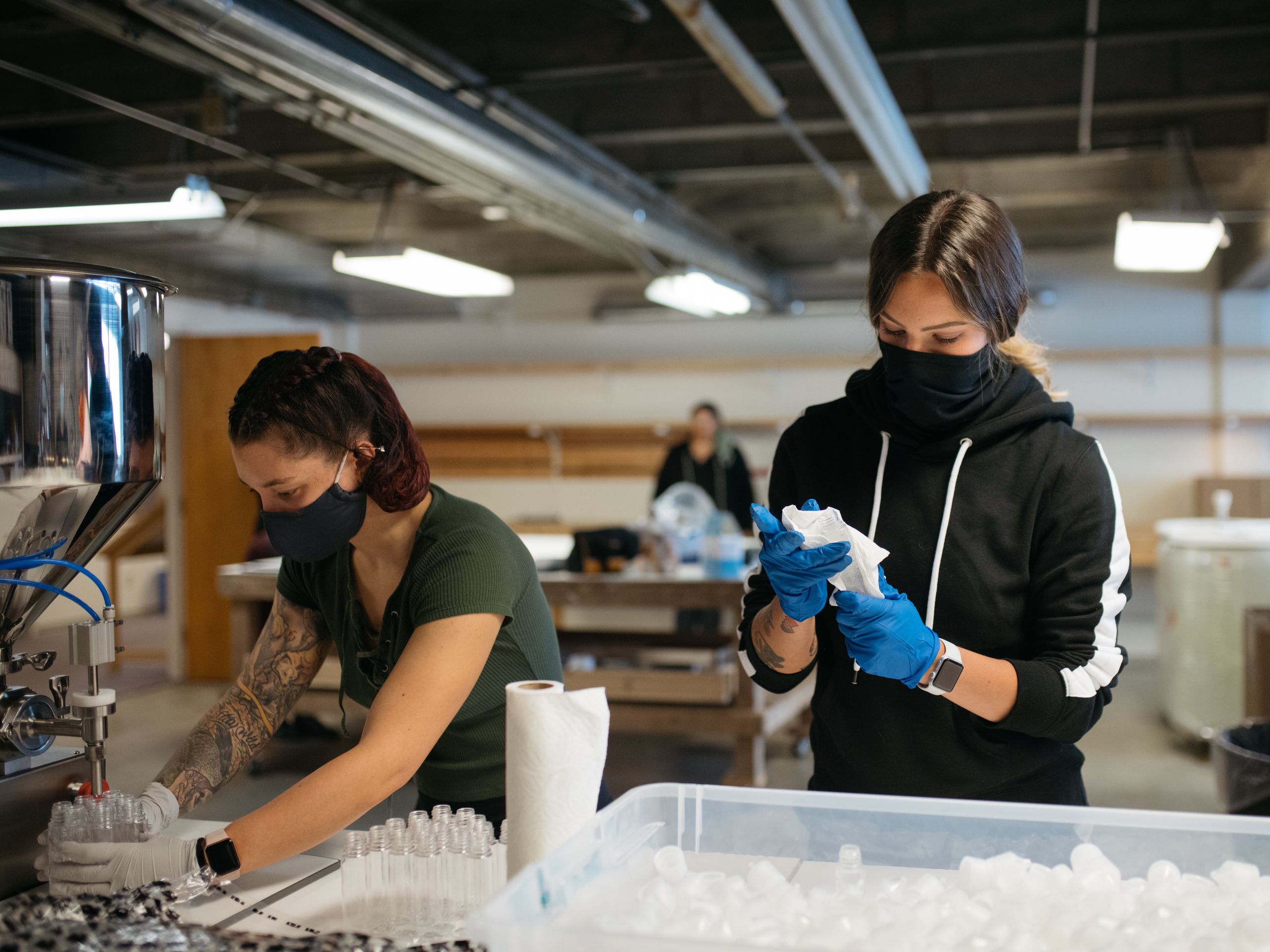 Two semiautomated production lines feed sanitizer into bottles, cap them with a lid, then stick on a label. Of the four volunteers manning the lines, all were either sex workers or their partners. They also have an office space and a “clean room” for sterilizing equipment.

The team’s pride in its recipe is palpable. Once you use it, the formulation goes through three stages: First it’s wet (“everyone thought it was lube when we handed it out the first time,” Lascelles said), then it’s sticky, then it’s gone. The liquid comes in vape-juice bottles ― Jensen knows where to get them and they’re dirt cheap due to the collapse of that industry since the start of the pandemic.

Right now, Jensen and Adam (they’ve both been promoted to Directors of Liquid Transmission, or DOLTs) are working on automating their production lines and extending their supply chain. When their alcohol vendor fell through, they started ordering pre-made sanitizer to ensure their outreach wouldn’t get interrupted.

Lascelles, for their part, is focusing on distribution. As well as the nightly outreach runs, they’ve sent more than 6,000 bottles to harm-reduction and homeless advocacy organizations. Lascelles even started handing out bottles as tips to food delivery drivers.

The larger space and faster production have allowed them to develop their business model. As well as being relatively easy to make, hand sanitizer is also profitable: Selling one bottle at retail price will allow them to give away two more. Lascelles calls it, in air quotes, the “Tom’s model,” after the shoe company that (haphazardly) sends one pair to the developing world for every pair sold in the United States. 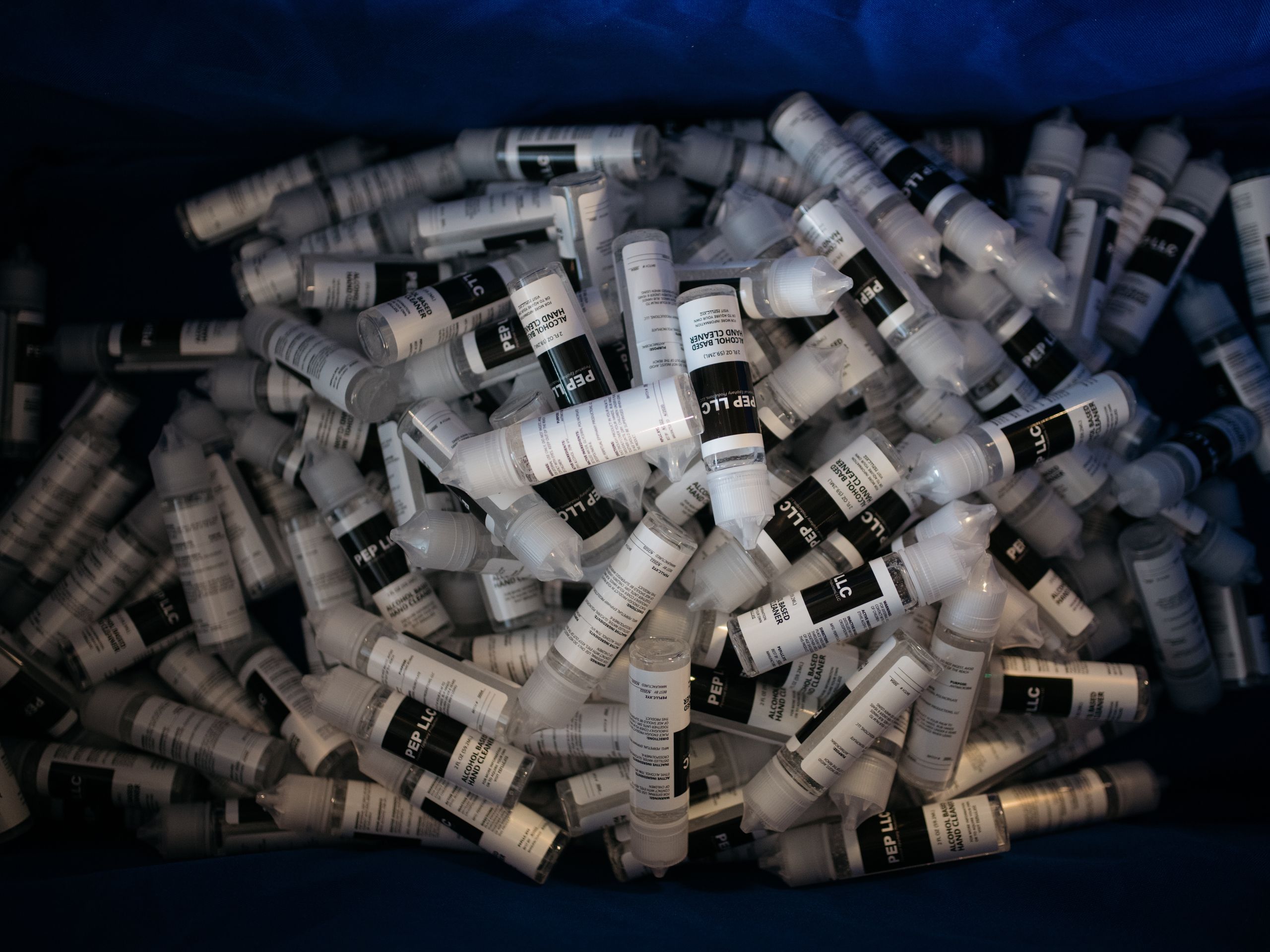 This is their blueprint for further expansion. Right now they’re making roughly 4,000 bottles a day and giving the vast majority of them away, either locally or shipping to sex worker organizations around the country. But they’ve also started to sell them: Other outreach organizations have purchased small batches, and a local school district recently ordered 1,200 bottles for its bus drivers.

The team plans to give away an additional 10,000 bottles in the next few weeks and hopes to sell enough stock to cover their costs and perhaps even make back some of their investment. So far, the co-founders have carried the financial burden themselves.

Ultimately, Lascelles plans to hire four to eight more employees — all current or former sex workers — to run the production lines. Jensen has built a website that will allow customers to put their own logo on each bottle.

They’re working on adapting their production line to make other sanitizer products or even body lotion, soap or shampoo. Green Light Project volunteers have already started to notice a looming lubricant shortage on their nightly outreach rounds.

“Sanitizer is the immediate need, but we could eventually make all of the hygiene products we hand out,” Lascelles said. “We’re connecting with the populations we serve every night, and they know better than anyone what they need.”

In the future, Lascelles said, “We could make anything here.”