Their journey kicked off Monday just after 2 pm ET when the astronauts strapped into the Crew Dragon capsule, which has remained attached to the ISS since it arrived with the crew in April. They’ll spend the rest of the day aboard the capsule as it maneuvers through orbit. The capsule is slated to splash down off the coast of Florida, around 10:30 pm Monday.
Issues with the toilet on board SpaceX’s Crew Dragon capsule will leave the astronauts without a bathroom option during their trip back home. Instead, the crew will have to rely on “undergarments” — essentially adult diapers.

SpaceX first discovered an issue with its spacecraft’s toilet in September while inspecting a different Crew Dragon capsule. The company found that a tube used to funnel urine into a storage tank became unglued, and was causing a leaky mess hidden beneath the capsule’s floor.

After discovering that issue the four astronauts who make up SpaceX’s Crew-2 — NASA’s Shane Kimbrough and Megan McArthur, French astronaut Thomas Pesquet of the European Space Agency, and Akihiko Hoshide from Japan — were prompted to check whether their Crew Dragon capsule had a similar issue. And it did.

During a press conference conducted remotely from the ISS on Friday, McArthur said using undergarments rather than the toilet is “suboptimal.”
“But we are prepared to manage,” she said. “Spaceflight is full of lots of little challenges. This is just one more that we’ll encounter and take care of in our mission, so we’re not too worried about it.” 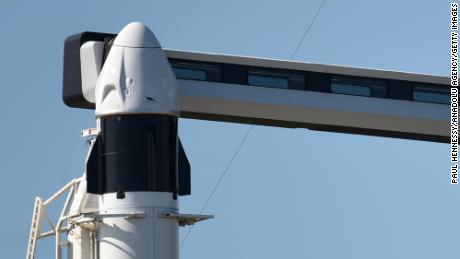 TAKE THIS QUIZ: Your body in space
The spacecraft should still be safe to fly, if not slightly less comfortable than before.
Kimbrough, McArthur, Pesquet and Hoshide are making their return to Earth before the next crew of astronauts was able to get to the ISS to replace them. NASA and SpaceX are hoping to get another mission off the ground later this week.
That next mission, called Crew-3, was slated to take off last weekend but was delayed — first by weather issues and then by a “minor medical issue” with one of the astronauts. NASA said Thursday that it’s expecting that medical issue to clear before takeoff later this week, and SpaceX and NASA officials are now focused on finding a good weather opportunity for launch.

Monday’s splashdown comes after SpaceX CEO Elon Musk lashed out on Twitter, this time making a sexual reference in going after Oregon Senator Ron Wyden, who chairs the Senate Finance Committee. Wyden, like many Democratic senators, has advocated for closing legal loopholes that allow billionaires like Musk to avoid paying regular taxes.
Wyden had tweeted in support of a “Billionaires Income Tax” after Musk polled his Twitter followers, asking if he should sell off 10% of his take in Tesla, which would come with a hefty tax bill. 58% of respondents voted “yes.” But, it should be noted, Musk has a multi-billion-dollar tax bill on stock options coming soon.
Source: Read Full Article