NASA's Bob Behnken and Chris Cassidy floated out of the International Space Station on their fourth and final spacewalk in under a month. Instead of swapping batteries, they had to route cables, hook up a tool storage chest and perform other maintenance.

It was the 10th spacewalk in each of their careers, tying the U.S. record set by previous space station residents.

In less than two weeks, Behnken and Doug Hurley, who monitored the spacewalk from inside, will depart the orbiting complex in the same SpaceX Dragon crew capsule in which they arrived at the end of May.

SpaceX is aiming for a splashdown off the Florida coast in August — the first splashdown for astronauts in 45 years. 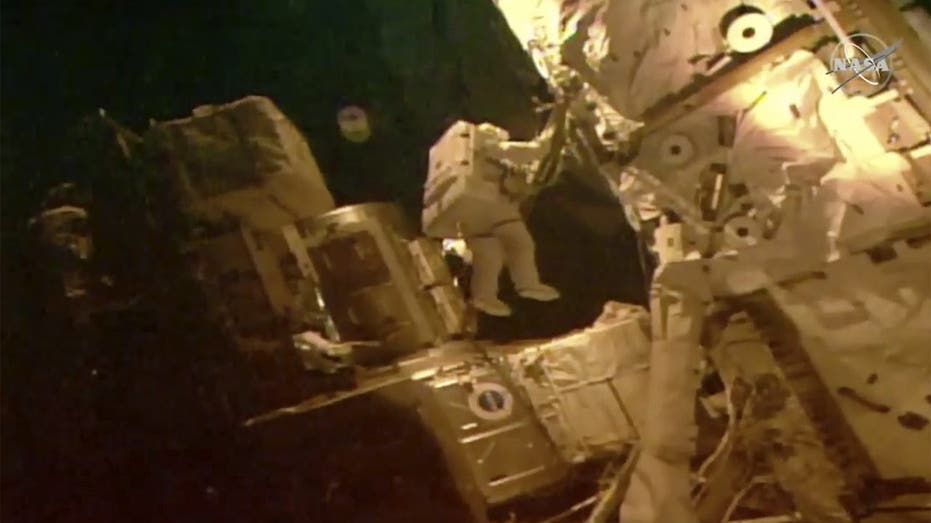 This photo provided by NASA shows astronauts Bob Behnken and Chris Cassidy on a spacewalk outside of the International Space Station on July 21, 2020. (NASA via AP)

Weather permitting, the Dragon capsule will parachute into the Gulf of Mexico off the Florida Panhandle.

NASA Administrator Jim Bridenstine said once Tuesday's spacewalk is finished, the astronauts are "going to be focused like a laser on coming home."

Bridenstine said the SpaceX test flight has gone exceedingly well so far. "And I'm knocking on wood because it is not over until Bob and Doug are home," he said at a Space Foundation panel discussion Monday.

The first-stage booster used to launch Behnken and Hurley on May 30 blasted off for a second time Monday from Cape Canaveral. It landed on a floating platform in the Atlantic after hoisting a satellite for South Korea's military, to be used again for another flight.