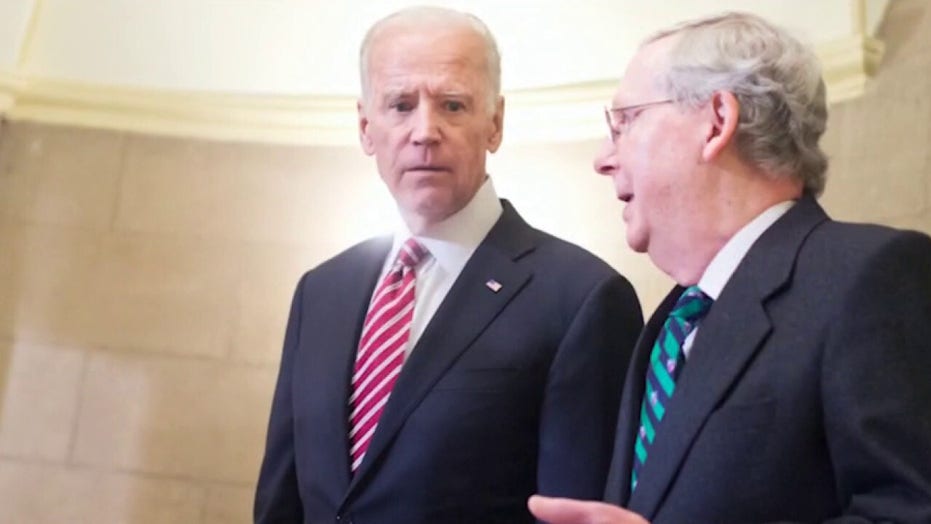 "I understand the disappointment tonight," President-elect Joe Biden said to President Trump supporters in his victory speech on Saturday night. "But now let's give each other a chance. It's time to put away the harsh rhetoric, lower the temperature."

The message of unity in the president-elect's address was consistent with much of the rhetoric of his presidential campaign. It was also in line with how Biden comported himself during his many years in the Senate — he was a dealmaking moderate, not a rancorous partisan.

But some members of the party Biden is now set to lead for the next four years do not appear to be getting his memo, as they lob angry rhetoric at those who have worked with and for, and even those who simply support, Trump.

"Is anyone archiving these Trump sycophants for when they try to downplay or deny their complicity in the future?" Rep. Alexandria Ocasio-Cortez, D-N.Y., said in a tweet. "I foresee decent probability of many deleted Tweets, writings, photos in the future."

"You can't heal or reform the GOP who are now an extremist party," Wajahat Ali, a contributing writer for the New York Times, said. "They have to be broken, burned down and rebuilt. When Biden is in power treat them like the active threats to democracy they are. If those who committed crimes aren't punished then they will be more emboldened."

Some have advocated for a "truth and reconciliation commission" to go after those who have worked for the president. In fact, such a group already exists, called the "Trump Accountability Project."

Michael Simon, who previously worked on the 2008 Obama campaign and in the former president's administration, pledged the project would provide a "record of every staffer, appointee, donor, [endorses] and enabler."

But some on the left attacked not only political types who might have worked with or for Trump and the Trump GOP, but also the president's rank-and-file supporters.

Billionaire Mark Cuban appeared to attempt to extend an olive branch to Trump supporters on Twitter, saying that "The overwhelming majority of Trump voters are NOT stupid, not racist, not anti-science… Mocking, gloating and holding grudges divides us further. We need to start talking again and come together as Americans."

"Whether Trump supporters are hostile or misled makes no difference to victims of gun violence, an uncontrolled pandemic and heartless immigration policies — all of which are choices," Brandon Friedman, a former member of the Obama administration and columnist for the New York Daily News, said. "We should reach out to *those* families long before attempting to reconcile with deplorables."

"I won’t empathize with, support, forgive, understand, make amends for, reconcile with Trump supporters. Not a single one," tweeted Preston Mitchum, a liberal community organizer in Washington, D.C. "He was a proud white nationalist who proudly raised up many white supremacists. That’s who supported him. And I make no apologies for saying this."

The disconnect between Biden's unity message and the anger toward Trump supporters from some in his party is a microcosm of the Democratic Party heading into 2021.

When filling his administration and setting priorities, Biden will have to balance his moderate campaign rhetoric and predilection for bipartisanship with a vocal left-wing of his party that wants to bring about "the most progressive agenda our country has ever seen," in the words of Rep. Ilhan Omar, D-Minn.

Sen. Elizabeth Warren, D-Mass., who is rumored to be seeking the treasury secretary post in Biden's administration, echoed a similar sentiment in a statement last week.

"A band-aid approach won’t get the job done. We have a mandate for action on bold plans to meet these twin health and economic crises," she said. "That’s what Americans deserve—and that’s what I’ll be pushing for every single day."

Biden, however, seemed during the campaign to say that he would control the party's agenda, not the liberal "Squad" in the House or Senate progressives like Warren or Sen. Bernie Sanders, I-Vt.

"My party is me," Biden said during the first presidential debate, as Trump accused him of being at the helm of a party that wants to eliminate private health insurance, a position held by many Democrats who lost to Biden in the Democratic primary.

"I am the Democratic Party right now," Biden added.