‘Sunday Night in America’ host reflects on the heroism, sacrifice of those who lost their lives protecting the nation

A Homeland Security source told Fox News that service members and veterans are upset after President Biden failed to acknowledge the 77th anniversary of D-Day on Sunday.

The source tells Fox News the fact that Vice President Harris tweeted about D-Day while Biden tweeted about the 1921 Tulsa Massacre on Sunday clearly underscores the administration’s priorities. Roughly 2,500 Americans died on D-Day.

“As a veteran I find it reprehensible that the president ends his speeches with ‘God bless the troops,’ which now seems to be in words only. He blatantly forgot to acknowledge the tremendous sacrifice of our greatest generation,” an Afghanistan and Iraq wars veteran told Fox News on Monday.

A second Homeland Security source told Fox News that White House press secretary Jen Psaki had “the perfect opportunity” to mention D-Day during her CNN interview on Sunday but failed to do so. 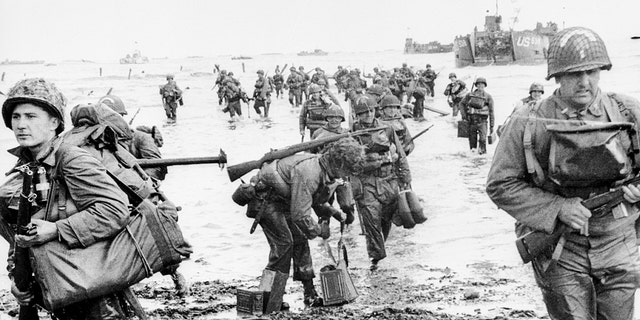 A search through the White House website and social media turns up only two tweets from Harris and first lady Jill Biden mentioning the day when U.S. soldiers stormed Normandy to liberate France from the Nazis, turning the tides in favor of the Allies during World War II. The day is typically honored by the American president.

“On the 77th anniversary of #DDay, we honor the heroes who stormed the beaches of Normandy and liberated a continent. We will never forget their courage and sacrifice,” Harris wrote on Twitter on Sunday.

“77 years ago, families gathered around radios and heard FDR pray for a ‘peace that will let all of men live in freedom, reaping the just rewards of their honest toil.’ Let us never forget those who fought, their families, or sacrifices, and let us always pray for peace. #DDay,” the first lady wrote on Twitter.

The president did honor fallen servicemembers including those who died on D-Day in his Memorial Day remarks last week.

“War and conflict, death and loss are not relics of our American history; they’re a part of Americans’ story.  Here in Arlington lie heroes who gave what President Lincoln called ‘the last full measure of devotion,’” Biden said. “They did not only die at Gettysburg or in Flanders Field or on the beaches of Normandy, but in the mountains of Afghanistan, the deserts of Iraq in the last 20 years.”

Former Presidents George W. Bush, Barack Obama and Donald Trump all acknowledged the anniversary of D-Day in some capacity in their first year in office. Bush commemorated D-Day’s 57th anniversary in a speech in Bedford City, Virginia, in 2001. Obama traveled to Normandy, France, for the 65th anniversary in 2009.

Trump commemorated the anniversary with a tweet in 2017 and traveled to Normandy for D-Day’s  75th anniversary in 2019.