President Biden will detail his administration’s planned initiatives to combat racial injustice on Tuesday during a speech commemorating the 100th anniversary of the Tulsa race massacre.

Biden will travel to the Greenwood Cultural Center in Tulsa and meet with survivors of the 1921 massacre. At least 300 Black people were killed when a white mob attacked the Greenwood district, known as “Black Wall Street” for its thriving businesses, in what is considered one of the worst race massacres in the country’s history.

The president will unveil plans to expand federal contracting with disadvantaged small businesses by 50%, according to senior administration officials. The expanded spending will amount to $100 billion over a five-year span, in a move officials said would help with efforts to close the racial wealth gap.

Biden will also tout investments as part of his proposed “American Jobs Plan,” including a $10 billion fund to overhaul infrastructure in underserved communities and $31 billion to support minority-owned small businesses. The proposal includes a “Neighborhood Homes Tax Credit” to promote private investments in affordable housing. 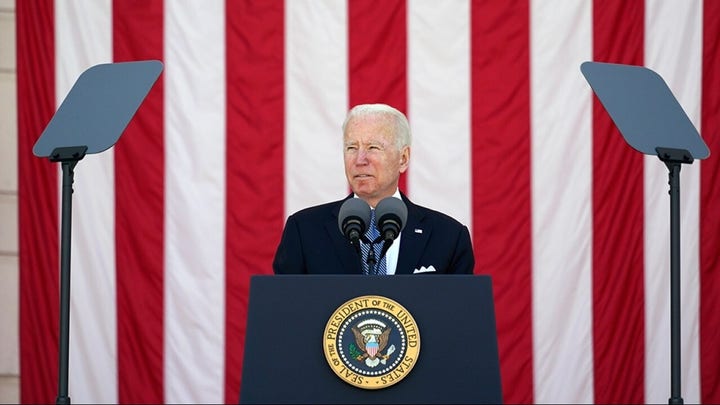 Biden will direct Housing and Urban Development Secretary Marcia Fudge to lead an interagency review of inequality in the home appraisal process and crack down on housing discrimination. Officials cited statistics showing a gap in valuations for homes located in predominately white neighborhoods compared to homes in predominantly Black or Latino neighborhoods.

Additionally, the HUD Department will restore Affirmatively Furthering Fair Housing, an Obama-era regulation meant to combat housing discrimination that was discontinued during the Trump administration, as well as HUD’s discriminatory effects standard for housing practices.

Biden issued a proclamation on Monday declaring May 31 a day of remembrance on the 100th anniversary of the Tulsa massacre.

“I call upon the people of the United States to commemorate the tremendous loss of life and security that occurred over those 2 days in 1921, to celebrate the bravery and resilience of those who survived and sought to rebuild their lives again, and commit together to eradicate systemic racism and help to rebuild communities and lives that have been destroyed by it,” Biden said in the proclamation.