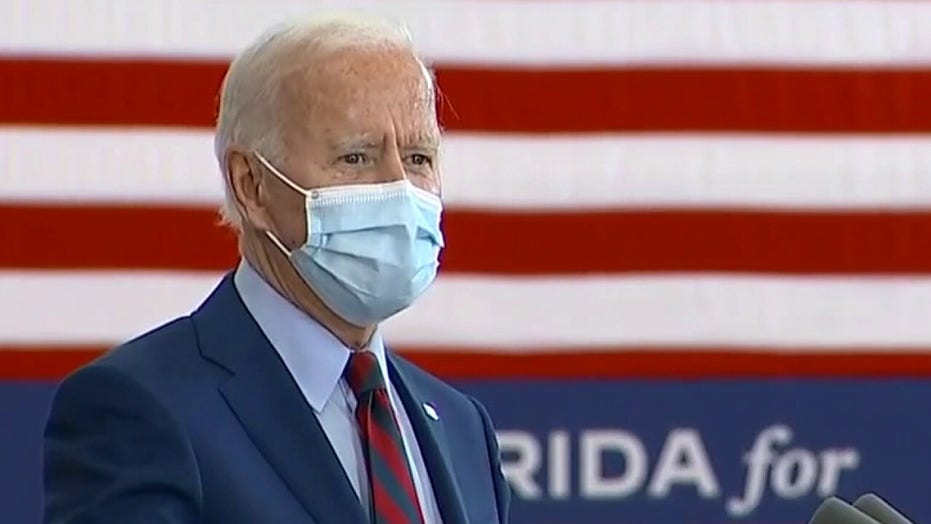 Biden urges the president to back universal mask mandate

In a visit to the Little Haiti Cultural Center in Florida, Joe Biden calls on President Trump to issue a universal mask mandate.

Speaking at an NBC town hall event in Miami, Biden said that he “wasn’t surprised” to learn of Trump’s positive test result. The former vice president was then asked whether he felt Trump was responsible for contracting the virus.

“Anybody who contracts the virus by essentially saying masks don’t matter, social distancing doesn’t matter, I think is responsible for what happens to them,” Biden said in response.

Trump returned to the White House on Monday and posed for photos without a mask after spending the weekend at Walter Reed National Military Medical Center. The president’s physician, Dr. Sean Conley, said Trump was not “out of the woods.”

CHRIS WALLACE: TRUMP 'BEARS THE PRIMARY RESPONSIBILITY FOR WHAT HAPPENED' AT THE DEBATE

Trump addressed his return to the White House on Twitter, writing that the public should not “be afraid of Covid.”

"Don’t let it dominate your life. We have developed, under the Trump Administration, some really great drugs & knowledge,” the president tweeted.

Biden was critical of Trump for downplaying the severity of the coronavirus pandemic, which has killed more than 210,000 people and infected 7.4 million in the United States.

“The only thing I heard was one of the tweets saying that ‘don’t be so concerned about all this’ essentially," Biden said Monday evening. "There’s a lot to be concerned about."

The Democratic presidential nominee said that he was “truly happy” that the president and First Lady Melania Trump were on the road to recovery following their diagnosis. He said he was not concerned for his own health after sharing the debate stage with Trump last Tuesday – just days before the president’s condition was revealed – because he has been “fastidious” about wearing a mask and staying socially distanced from others.

Biden also offered a defense of Trump’s physicians when asked whether they should have been more transparent about his health during his stay at Walter Reed. The former vice president committed to being transparent about his own health if elected, so long as the details did not interfere with national security.

“I can understand that in certain circumstance relating to national security where every detail would not be made available in the middle of a particular crisis,” Biden said. “But the overall question of whether or not I’d be transparent about whether or not I had a serious problem or what treatment I got, yes."

Biden added: "But sometimes, for a president, that would come after the fact. So I’m not being critical of the fact that every single detail was not released.”

Trump could cut taxes by $1.1T over next decade if reelected, study shows

Trump could cut taxes by $1.1T over next decade if reelected, study shows