As David Leckie’s close friend and long-time associate, Peter Meakin, once said: “Defeat is just not a word in his vocabulary”.

He was right. As late as 2020 Leckie was determined to help turn around the fortunes of billionaire Kerry Stokes’ Seven Network, which he ran and loved for almost a decade, for the second time. 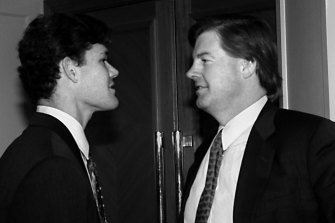 James Packer and David Leckie in their days at Nine.Credit:Belinda Pratten

Leckie, chief executive of both the Seven and Nine Networks, fought hard until his final day, July 20, when a long battle with illness overcame him at his Southern Highlands cattle farm. He was 70.

The larger-than-life executive was an icon of Australian television. Hired by Stokes to lift Seven out of its ratings woes 18 years ago, the brash and boisterous executive led the broadcaster to its first annual win in television ratings in a non-Olympic year since 1978, dethroning the once mighty Nine Network. Asked what he wanted to do next, he told journalists he had a simple plan: “Make more money.”

An executive born of the Kerry Packer and Sam Chisholm era at Nine, Leckie is fondly (and not so fondly) remembered by his former colleagues as a colossal figure in the “golden era” of television – one of cowboy boots and unwavering confidence.

“Legend is an overused word in any industry. Not so in David’s case,” long-time friend and former News Corp boss John Hartigan says. “It takes an unusually talented and resilient executive to withstand the Packer and Stokes blowtorch. He took it in his stride and excelled.”

Leckie was famous for many things. He cut deals over long lunches at his local, the Woollahra Hotel, or Sydney restaurant Machiavelli (where his portrait sits among other well-known Australian media and political figures). Once prominent media buyer Harold Mitchell named him “TGO – The Great One”: it’s a nickname few in the television industry would dispute.

David John Leckie was born in Sydney in 1951 to Joyce and Ron Leckie, who ran a transport division of the multinational conglomerate Unilever. He grew up on Sydney’s north shore, attending Newington College, where he played rugby in the Second XV, before going to Macquarie University to acquire a BA in economic and financial studies. After uni, he travelled through Europe and worked at the advertising agency Saatchi and Saatchi in London.

Leckie returned to Australia with his first wife, Barbara Spence, and joined Nine as a salesman in 1977. Over nearly 25 years, he would work his way up to become the nation’s most powerful television executive, before he was unceremoniously dumped in January 2001 by then PBL boss Peter Yates and James Packer after 11 years at the helm.

Under his reign at Nine from 1991 to 2001, the network had only six weeks where it didn’t win the ratings, allowing it to boast over and over again it was “Still the One.” He maintained the successful formula of his predecessor, making sure the network was dominating news and current affairs as well as sport, and taking Nine to its biggest wins through the 1990s. 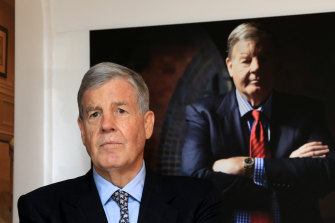 David Leckie at Machiavelli Restaurant, Sydney, back in 2014. Credit:Janie Barrett

He had much in common with his TV-passionate boss, the late Kerry Packer: Both were over 6 feet tall, imposing with the frame of a rugby player and a take-no-prisoners approach.

According to former 60 Minutes executive producer Gerald Stone, Leckie “was the only one tall enough to stare Kerry down during their tempestuous confrontations, and he had the granite resolve to go with his stature.”

A hard-working, hard-living executive, he was renowned for opening Nine’s office watering hole, ‘The Bar,’ at the end of a long working day.

Leckie eventually stumbled at Nine over a new ratings system introduced in 2001, whose methodology chipped away at the network’s lead against its rivals, Seven and Ten. Summoned to Park Street from a holiday on Palm Beach, he was told his services were no longer required and that Kerry Packer no longer wanted him there.

In the months that followed, many had written off Leckie as part of TV history, with no vacancies available for his main talent, which was running a network. Spending more time with his second wife, Skye, who he met when she was head of public relations at David Jones and married in 1995, and their two sons, Harry and Ben, he dabbled in some consulting work and waited for another chance.

It came in 2003 when over coffee Stokes offered him the opportunity to run his then struggling television network. Leckie was back – with a chance to avenge himself against his former employer, Nine. 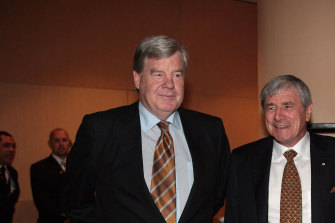 During his first few months at Seven, things got worse before they got better. The network’s audience share plunged to a 13-year low in 2004, with most of its new programs bombing spectacularly. Leckie was reported to be severely bleak and close to the way out, when he became what he later called ‘Lucky Leckie.’

After years of mediocre product, an output deal with Disney handed him the hottest US shows for 2005, Desperate Housewives and Lost. Add to that Lleyton Hewitt’s entering the men’s final of the Australian Open tennis in January, he had the perfect platform to market Seven’s new programs to millions of viewers.

Crucial to Leckie’s success at Seven was the realisation that it should no longer try to copy Nine, but aim for a more laid-back and daggier suburban audience – heartland Australia.

“We thought Seven should become like Nine, but we’re not Nine. We’re heartland Australia. The key to our success is being comfortable with what we are,” he said.

Leckie established a reputation as a loudmouth larrikin, who was known for his colourful language and could be bold and explosive, but also charming and entertaining. His hard-drinking, heavy-swearing ways were the stuff of TV legend, and his exit from the industry marked what Chisholm described as an end to a “swashbuckling era” where executives were colourful characters.

“David was a man of many idiosyncrasies,” Hartigan says. “Not suffering fools was high among them. Anyone on the end of a Leckie blast remembers the moment – maybe not the advice but certainly the bollocking.”

At an annual TV industry love-in in Cannes he gave a now legendary, expletive-filled speech which left no doubt as to what he thought of the French seaside town and the international TV executives.

“Welcome freeloaders and dinosaurs,” was how he started, abusing the Americans and telling the “Poms” present that they had the world’s worst television and were “totally up themselves.”

Five minutes after the wedding ceremony of his long-time employee, Seven’s former head of government and regulatory affairs Bridget Fair, Leckie stood up unsolicited in front of the crowd to announce he was moving things along because it getting “boring”.

He didn’t shy away from what he thought of his rivals, either. In his time at Seven, Leckie took would often get the name wrong of then Ten boss Grant Blackley in interviews, describing him as “Gert Clackley”, “Bert Brackley” and “Greg Cackley”.

Former Seven boss Tim Worner says Leckie was such a huge character that he was described as a “danger to shipping”.

“We called him Big Wave (Dave) and it was a very appropriate nickname,” Worner says. “He was completely fearless and that in turn brought you so much confidence. He made television an adrenaline sport, a sport we were very, very lucky to play with him.”

Leckie loved long-lunch and a drink or two, but his life became more complicated after he injured his finger in 2008. The injury led to septicemia and he was put into a medically induced coma in Sydney’s St Vincent’s Private Hospital.

He formally stepped down as CEO of Seven in 2012, four years on from that life threatening experience to focus on his health. He stayed on as a consultant from Seven owner Kerry Stokes until 2016 and spent his time working on other projects and interests such as his passion for rugby union – Leckie served as a board director at Easts Rugby Club – and his farm.

But television remained his main passion and Leckie was brought back to Seven in March 2020 to act as a “mentor” to the network’s executive including his protege, chief executive James Warburton.

Meakin, who visited Leckie in his final months, said that even as he became frail, he was determined.

“He was determined to regain his health … and he was just as opinionated about things as he ever was. He never lost that.”