The business partner of alleged Westpac fraudster Bill Papas will face a two-day grilling next year after the banks’ lawyers raised questions about the accuracy of evidence he had provided to the court.

Vince Tesoriero will face cross-examination in March after allegedly changing his story about his involvement in Forum Finance in court documents. 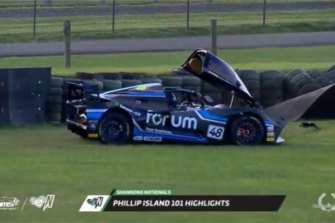 Vince Tesoriero was driving the Forum Finance-sponsored Audi when it crashed out at Phillip Island in 2018.

Westpac and two other lenders, Sumitomo and Société Générale, in a civil case have accused Mr Papas of orchestrating a $500 million fraud by drafting up fake loan documents on behalf of Forum customers using forged signatures. Mr Tesoriero, who is based in Melbourne, has also been accused of being involved in the fraud, though he is rejecting those allegations and denies any involvement.

Mr Papas, who left for Greece in June as the alleged fraud was being uncovered by the banks, is facing contempt of court charges after failing to respond to requests for information from the court and Westpac’s lawyers. He was unrepresented in court on Friday. Mr Papas’s cousin Eric Constantinitis has also been added as a defendant in the case after Mr Papas allegedly broke his freezing orders to transfer Mr Constantinitis money from his Macrovue share trading account, as revealed by The Age and The Sydney Morning Herald.

The race car-driving café owner had initially claimed in affidavits filed in July that he had loaned one of Mr Papas’ Forum companies $10 million. However, counsel for Westpac, Jeremy Giles SC, told the court Mr Tesoriero had changed his version of events.

“Mr Tesoriero invested, it is now said, by way of equity into the Forum group of companies that is the parent company of everything except FGFS (Forum Group Financial Services) some $6 [million] to $9 million dollars, although he can’t give your honour a document recording any of that.”

Mr Giles added that Mr Tesoriero “got a little upset” with Mr Papas when the money wasn’t realised and came to some form of oral agreement with the colourful soccer identity for a return on his investment.

Mr Giles told the court he found the change “troubling”.

Justice Michael Lee said in light of Westpac’s concerns he would order Mr Tesoriero to be examined over his statements. “If you’re going to ask me to disbelieve the man’s evidence, then you’ve got to put it to him,” Justice Lee said.

Mr Tesoriero resigned as a director from most Forum entities in April 2020, but remained a director of a key entity within Mr Papas’ business empire.

Counsel for Mr Tesoriero, Paul Hayes QC, told the court Westpac’s case against his client may be thrown out by the court given the bank was yet to outline Mr Tesoriero’s knowledge of the allegedly fraudulent scheme.

Justice Lee said Forum Finance had likely “been involved in a long-running, calculated and elaborate fraud which would rank high in the catalogue of corporate misfeasance.”

“Nothing in the evidence that has emerged to date casts doubt upon that conclusion.“

Mr Tesoriero also asked the court on Friday to vary asset freezing orders so that he could pay for his legal fees. His lawyers had sought nearly an additional $600,000 to prepare for the cross-examination in March and pay for other legal costs. Justice Michael Lee described that request as “an extremely excessive amount”, allowing Mr Tesoriero an additional $100,000 on top of the court’s allowance of $350,000.