A bipartisan push to slash regulation and encourage more multifamily housing units to be built in the suburbs is gaining steam in Congress.

Sens. Todd Young, R-Ind. and Brian Schatz, D-Hawaii, reintroduced the Yes In My Backyard (YIMBY) Act on March 13. The bill, which was first introduced in Congress in 2019 but put on hold due to the COVID-19 pandemic, incentivizes state and local jurisdictions to adopt certain policies that are designed to chip away at single-family-only zoning.

Among the 20 policies listed in the bill, include allowing the conversion of office units to apartments, reducing minimum lot size, eliminating or reducing off-street parking requirements, and enacting high-density single-family and multifamily zoning, among others.

Per the YIMBY Act, jurisdictions receiving funds through the $3.4 billion Community Development Block Grant program would be required to file reports with the US Department of Housing and Urban Development (HUD) specifying which of the policies they’ve adopted or explain the reasons why they have not adopted any of the policies.

Mike Kingsella, executive director of Up for Growth Action, told Reason magazine that the YIMBY Act, unlike other bills targeting housing development, “is not a stick. It’s not a carrot.” 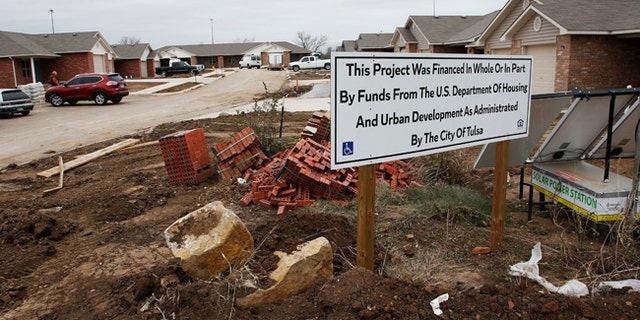 New housing developments being built are seen in north Tulsa, Oklahoma, in December of 2016.
(AP)

“It lives somewhere in the middle,” Kingsella said. “We believe that local leaders will be able to start conversations in their community because these questions are being asked by HUD.”

“The country is dealing with a housing affordability crisis and it’s about time that localities do their part to make housing more affordable for everyone,” Young said.