The concept electric vehicle is filled with futuristic and fantastical elements, from changing interior layouts to a front dashboard that can transform into a daybed when the car is parked.

However, lounging spaces don't stop at just the daybed: the vehicle's entire interior is reminiscent of a bright living room with set floor plans, furniture, and even a plant. There's also room to sit on the floor when the single sliding door is open.

"In the MINI Vision Urbanaut, we extend private space far into the public realm, creating completely new and enriching experiences," Head of BMW Group Design Adrian van Hooydonk said in a statement on the news release announcing the concept vehicle.

According to BMW, the concept vehicle was “designed from the inside out.” 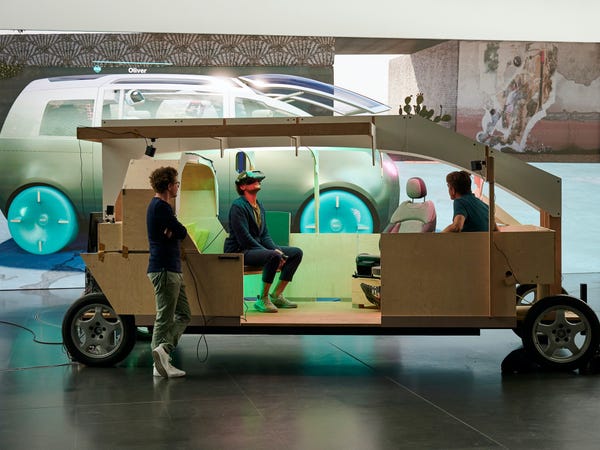 The vehicle is taller than a typical Mini but sits at 14.6 feet long. 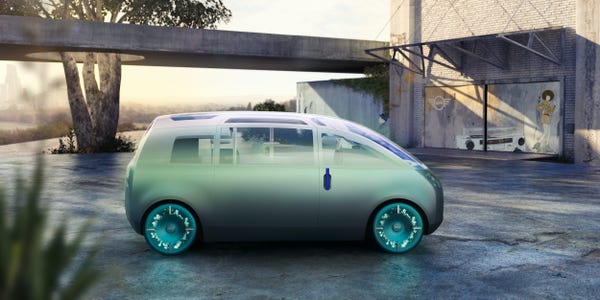 Augmented reality systems were used to create the digital version of the Vision Urbanaut, according to its maker. 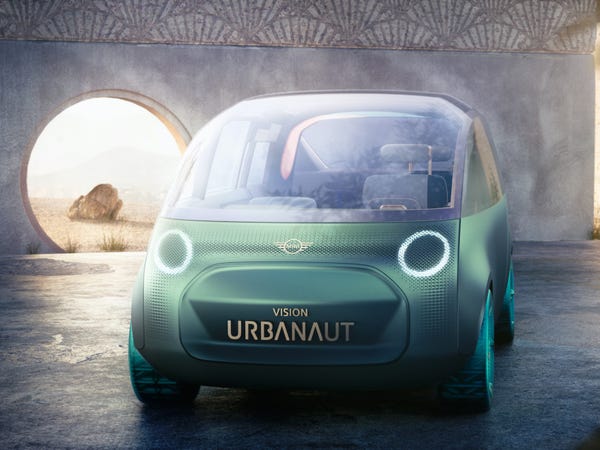 The single entry sliding doorway sits on one side of the vehicle, removing the need for any additional doors. 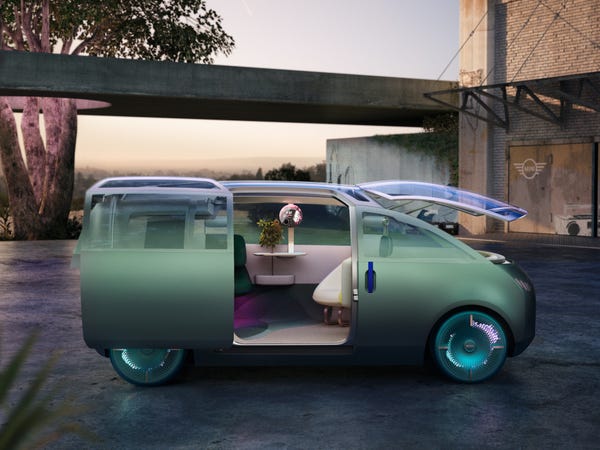 The car can be opened using smartphones, and points of interests are customized for the passengers. 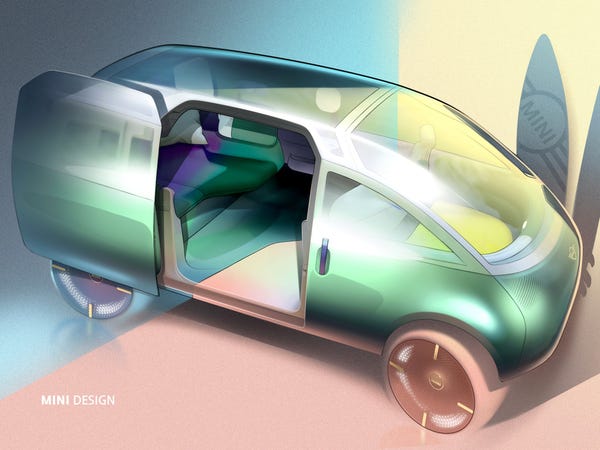 Moving inside, the interior has four seats. The two in the front can be rotated to face the interior, and the rear backrests can be folded or turned. 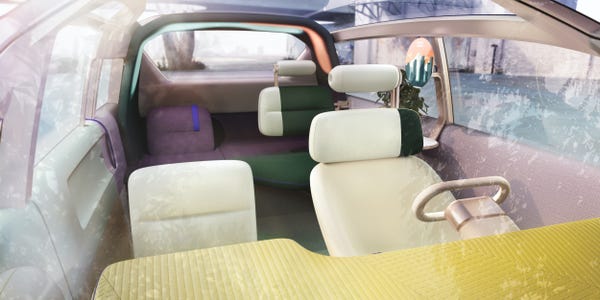 The electric concept vehicle uses sustainable and recycled materials, a trend that other electric automakers like Fisker have taken part in as well. This includes the use of cork in the steering wheel and parts of the floor. 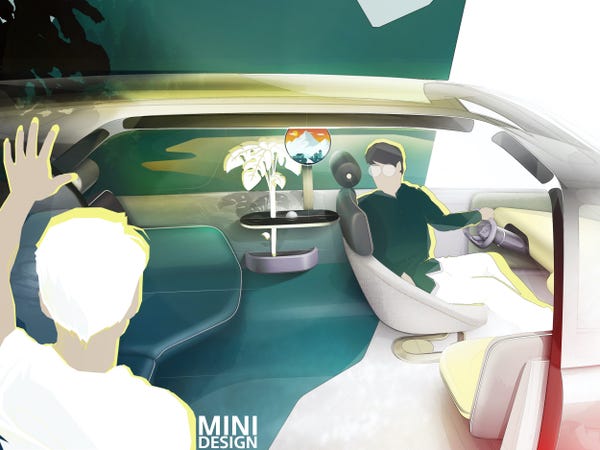 The table that the plant sits on is the "center point" for social interactions inside the vehicle. Near the table is a multi-purpose display that also doubles as a table lamp when it's folded. 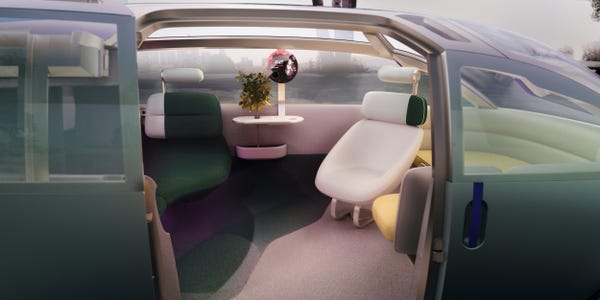 When the car is parked, the windshield can open up and the dashboard can become a daybed seating nook. 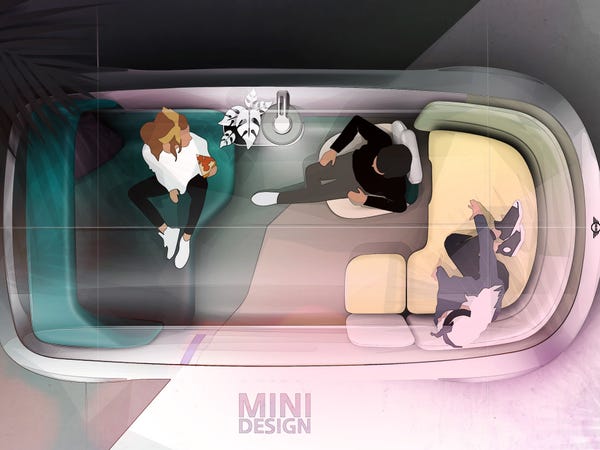 In order to create a more minimalist space, its maker didn’t include any “switches or buttons.” 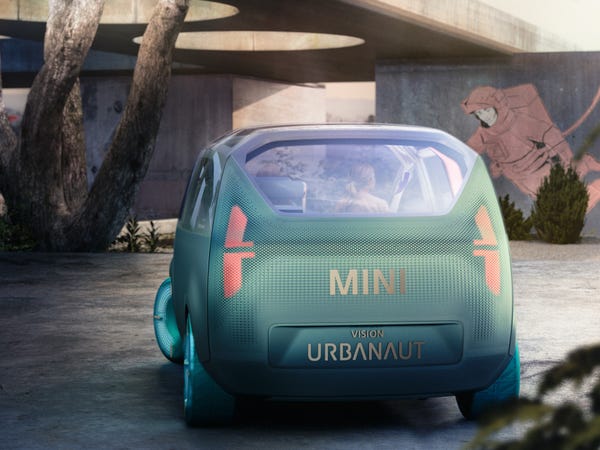 "With the Mini Vision Urbanaut we have been able to rethink and increase the usable surface area inside the car even further in relation to its footprint," the head of Mini Design Oliver Heilmer said in a statement in the news release. 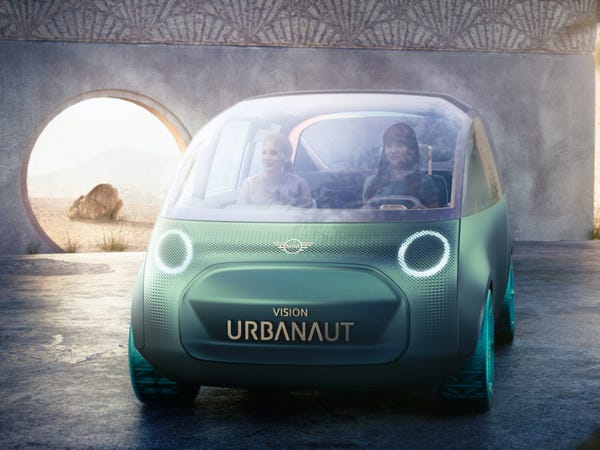 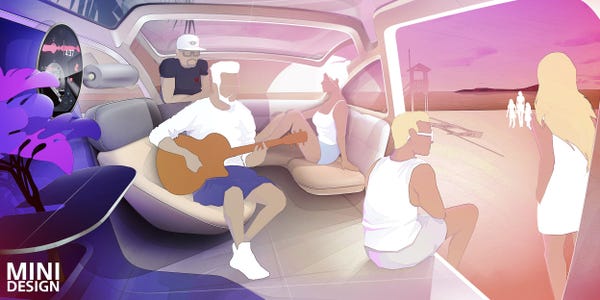 These three Mini Moments — as well as any personalized "moments" — are used in the "Mini Token" and its system. 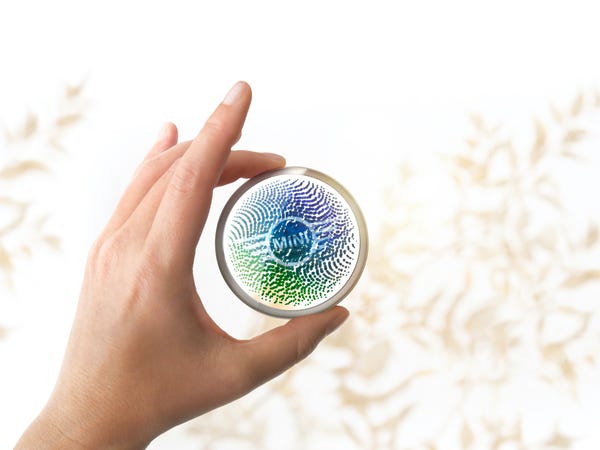 When a "moment" is activated after a token is put into its slot at the table, aspects of the car — such as lighting, music, and smells — will change according to the selected "moment." 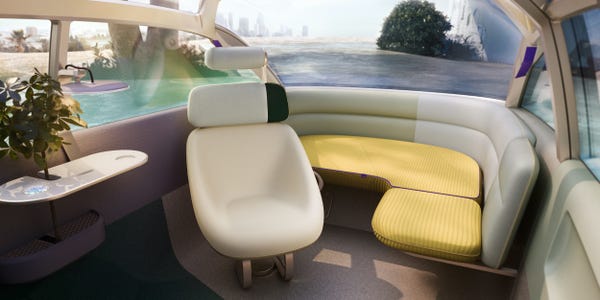 "Chill" is integrated into the vehicle by making it a "retreat" space for relaxation and work. 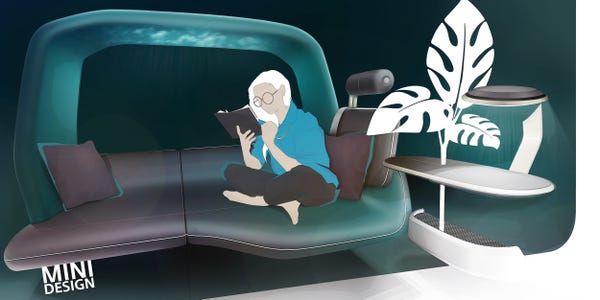 The rear part of the Vision Urbanaut is the "Cozy Corner," which has features like LED back lights and a dimmable "loop" that looks like a forest canopy when the car is activated in its "chill" mode, according to its maker. 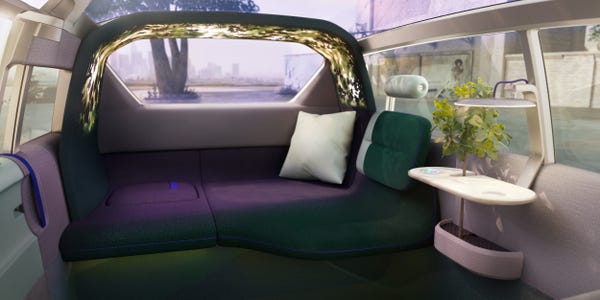 "Wanderlust" is showcased with the Vision Urbanaut's movement, either when it's driven by people or by its automated drive capabilities. If the passengers prefer automated driving, the steering wheel, pedals, and drive display will vanish. 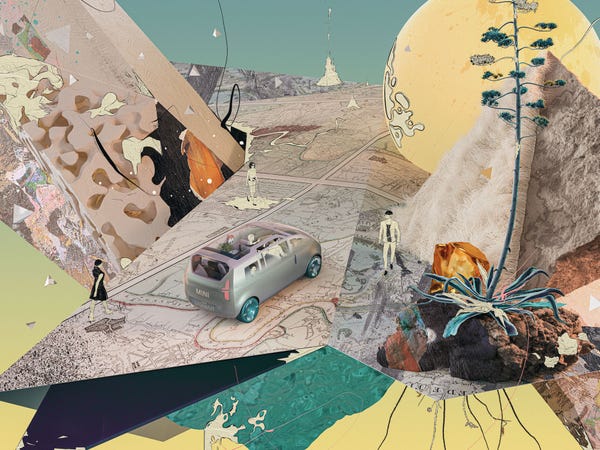 When the car is in "wanderlust" mode, the interior layout alters to be driving friendly, and the circular display changes to show tourist posters from the mid-1900s, as well as route and driving information. 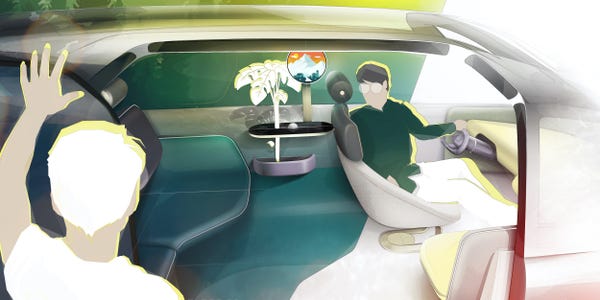 The aforementioned loop also updates to show "simulated blurs of passing scenery in a mix of orange and turquoise," according to its maker. 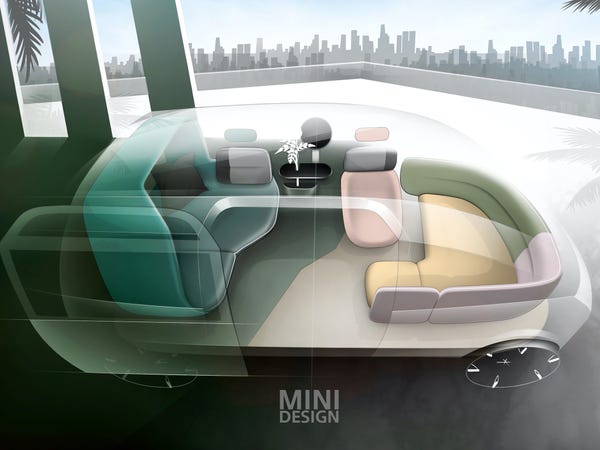 The final "vibe" theme is reflected in its goal of allowing people to spend more time with each other. 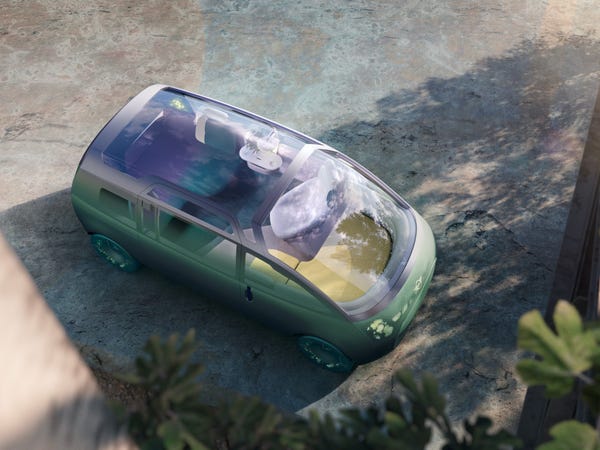 In "vibe" mode, the side door and windshield open for an indoor-outdoor feel, and the circular display becomes a "media control center" for music. 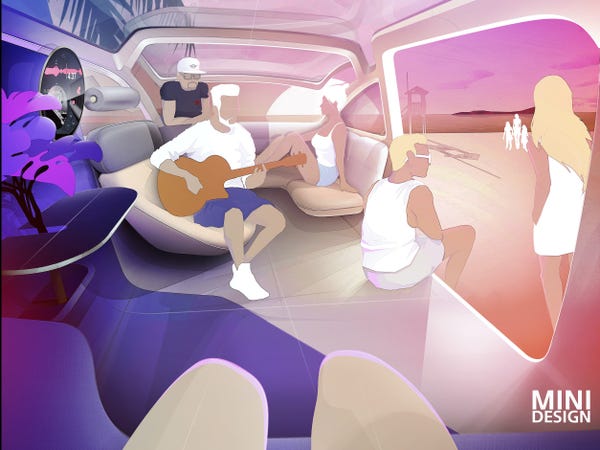 Illustrated equalizers are then projected throughout parts of the car to create what BMW Group calls a "pleasant club atmosphere." 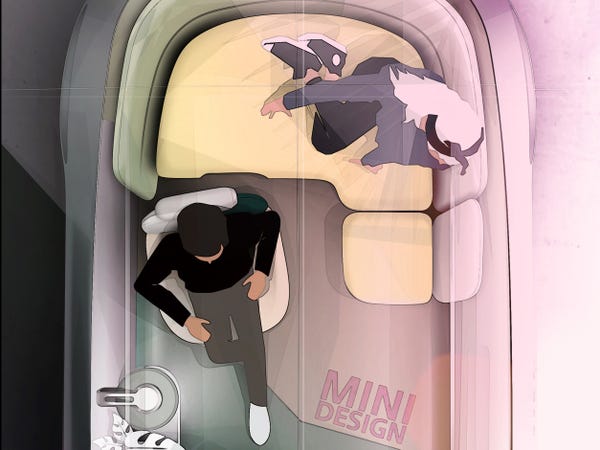 Even the exterior receives a makeover per "moment": the color of the wheels and head and rear lights can change according to the "moment" that the occupants have selected. 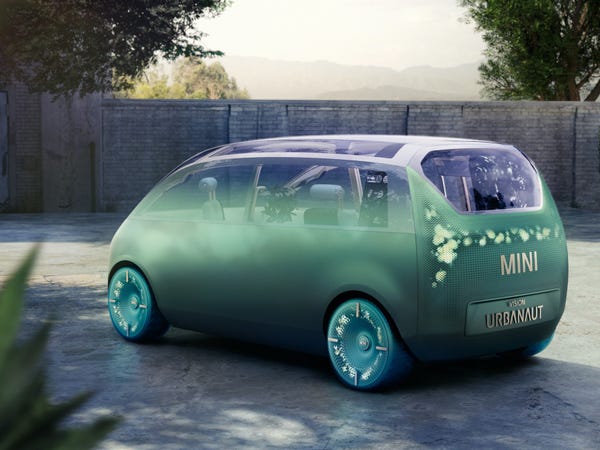 Otherwise, the wheels are turquoise blue, inspired by the ocean. They're also shaped to look like skateboard wheels. 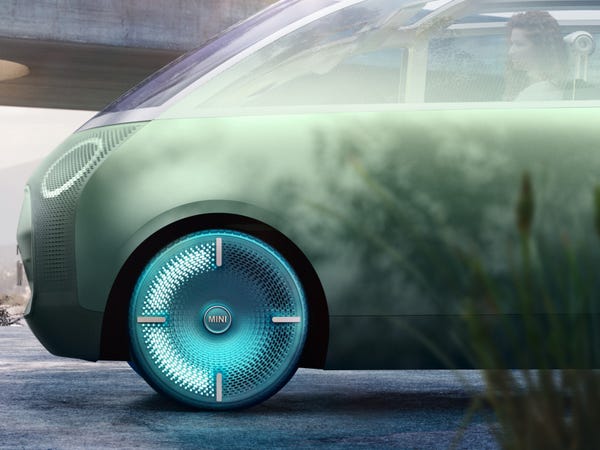 Vision Urbanaut's headlights can only be seen when they are activated. 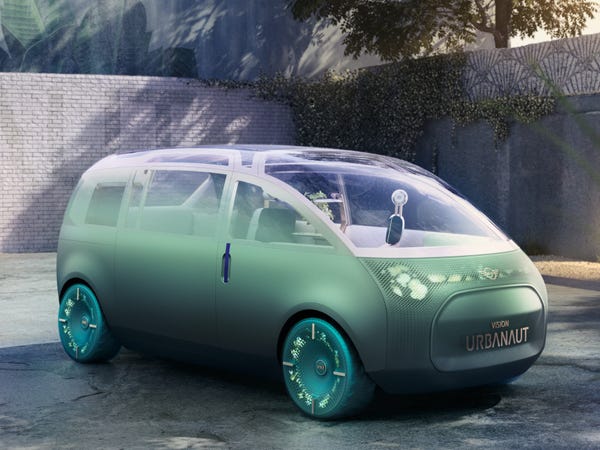 Both the front and rear lights have "multicolor dynamic matrix" capabilities, and both lights can also indicate when the car is in its "automated driving" mode. 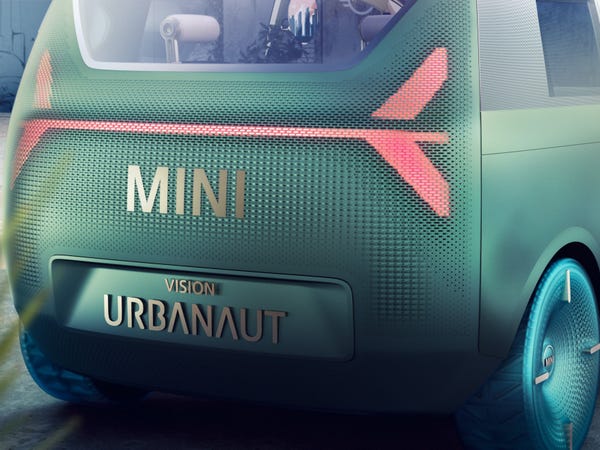 The grille has also been altered to be octagon shaped with the purpose of acting as the "intelligence panel for automated driving."

The unique color of the vehicle and its gradient windows are also a change from the typical non-conceptual Mini vehicle. 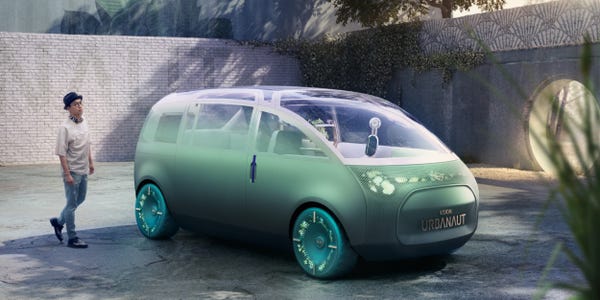 Finally, the driver's side C-pillar comes with a display box-like glass section that allows passengers to showcase different "charms" from different experiences, according to its maker. 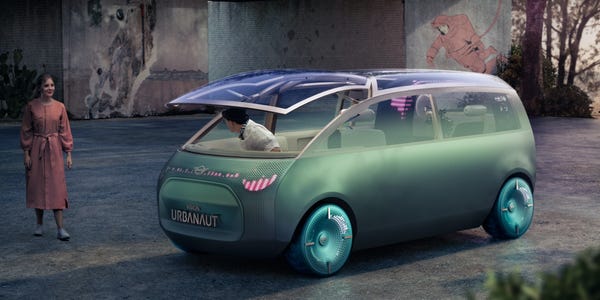 One of the "charms" also includes a QR code that redirects to Mini.com. 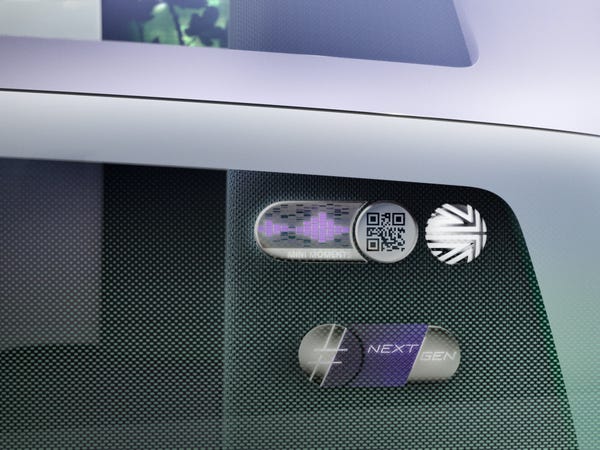