A video of a controversial meeting between Brazil’s Jair Bolsonaro and members of his cabinet became public on Friday, fueling a political crisis that embroils the president just as the coronavirus pandemic grips the country.

The footage of the April 22 meeting had been under seal as part of evidence presented by former Justice Minister Sergio Moro, who resigned last month accusing the president of seeking to interfere with police investigations, some of which potentially involve members of Bolsonaro’s family. The Supreme Court allowed an investigation into the matter, which is ongoing.

“I already tried to change people in our security in Rio de Janeiro officially but I wasn’t able to,” the president says in the video, which is riddled with crude language uttered behind closed doors. “I’m not going to wait for them to screw over my whole family.”

His words fueled multiple interpretations, including that he may have been in fact requesting a change in Rio’s police chief for the protection of his family. Bolsonaro also offered incendiary remarks cursing the governors of Sao Paulo and Rio de Janeiro states and commenting that installing a dictatorship in Brazil would be “easy.” 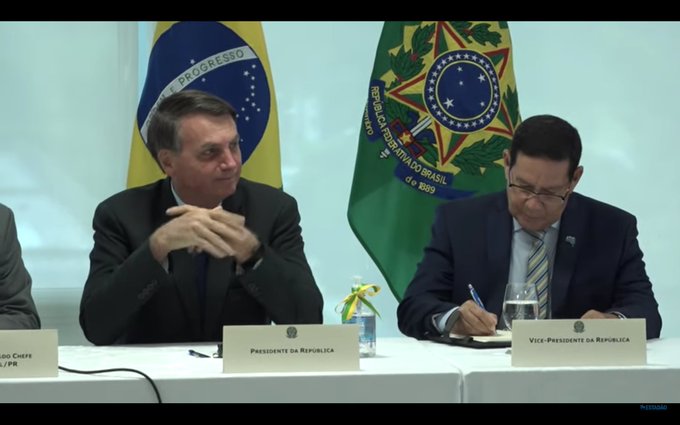 The video could end up implicating other cabinet members as well. Minister of Education Abraham Weintraub made disparaging comments about the Supreme Court, saying he would throw the justices in jail.

The Brazilian real rose after the publication of the video. “There’s nothing that relevant in the video,” said David Cohen, a partner at Paineiras Investimentos. “The market was waiting for this for two weeks, concerned about what the video could contain, and now that risk seems to be out of the way.”

Roberto Padovani, economist at BV, said, “There’s nothing new in the content of the video, nor anything that can erode Bolsonaro’s 30% support. So markets relaxed.”

Bolsonaro, who denies Moro’s allegations, had requested that parts of the video that are not related to the probe remain private to protect national interests. Moro, on the other hand, wanted it to be released to the public in its entirety.

In his decision to unseal the video, Justice Celso de Mello said the Watergate case from the Unites States, which led to the resignation of President Richard Nixon in 1974, had informed his judgment. He said it was legitimate for the Court to review acts of the president especially when they have to do with “the Head of State’s supposed criminal practice.” He determined the video should be unsealed for the sake of transparency and rejected Bolsonaro’s request that only a portion of the video be made public, saying that no secret content required part of the video to be withheld.

As part of the investigation, Mello asked the federal prosecutors to decide whether three requests from opposition lawmakers to have Bolsonaro testify and turn in his personal phone — along with the phone of his son Carlos — should be undertaken as part of the investigation. There is no deadline for the prosecutor to respond. In a statement, Institutional Security Minister Augusto Heleno called the seizure order “unbelievable”, an insult to executive powers, and “a clear attempt to compromise the harmony among powers that could have unpredictable consequences for national stability.”

The stakes are high for Bolsonaro, who is facing political and economic crises on top of the catastrophic public health crisis. The country recorded 1,188 deaths from Covid-19 over the past 24 hours, a daily record, and the total case count has topped 310,000.

Bolsonaro’s popularity has declined during the outbreak, in part due to his refusal to adopt social distancing measures and promotion of the controversial anti-malarial drug chloroquine. Contrary to the president, 76% of Brazilians believe social distancing is the best way to prevent the spread of Covid-19, according to a recent poll by XP/Ipespe. And even though half of Brazilians think his administration is “bad” or “terrible”, polling suggests his support base is still quite robust: 25% evaluated the president’s performance positively.

Moro’s defense team issued a statement Tuesday saying the video “confirms entirely” the declarations of the former cabinet member, and that its release would be in the public interest.

Read more:Bolsonaro in the Crosshairs of Brazil’s Top Court: A Quick Guide

— With assistance by Marisa Castellani