Corporate Australia has rejected claims by Deputy Prime Minister Barnaby Joyce that businesses and individuals have been hoarding rapid antigen tests, saying Australia is a victim of the global supply chain crunch.

Mr Joyce told ABC Radio on Monday the government had been working hard to import rapid COVID tests but said the products were being hoarded, with both individuals and businesses buying “more than they require”.

“Corporations and businesses who buy up more than you’d expect … It’s like saying you’re not producing enough toilet paper because people are swiping it off the shelves, I don’t know why they do it, but they do,” Mr Joyce said. 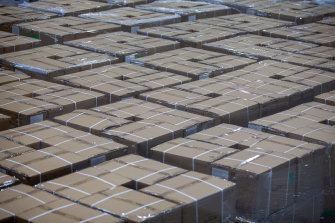 His comments came as the government launched a national program to provide free tests to concession cardholders, despite pharmacists warning they will not have enough stock to fulfil demand.

Health Minister Greg Hunt said there had been “clear cases” of hoarding rapid antigen tests, including “people that were scooping [them] up to resell at inflated prices.”

However, the business community and rapid test suppliers said there was no hoarding and blamed global supply chain shortages, which many in corporate Australia have been warning of as early as last year.

“We reject claims that businesses are hoarding rapid antigen tests. This claim is an unfortunate deflection from the government’s failure to source enough of the testing kits as Omicron cases have peaked in recent weeks,” said chief executive of the Australian Retailer’s Association Paul Zahra.

“The fact that some businesses took sensible steps to procure rapid antigen tests many months ago is good planning and has no relationship with the government’s supply chain,” Mr Zahra said.

A Woolworths group spokesperson said the supermarket giant had been sourcing test kits “for many months” and now had the right amount to cover the needs of its distribution team members. “We’re mindful of the high demand in the community and continue to work with our supply partners to offer as many tests as we can to our customers,” the spokesperson said.

Chemist Warehouse director Mario Tascone said unprecedented demand for the products had led to retailers putting purchasing limits on test kits. “We agreed to limit sales to one per customer in all our stores… so I don’t know how hoarding goes on,” he said.

Mr Tascone said Chemist Warehouse had stock ready for the launch of the free rapid antigen scheme for concession cardholders, and while stock may run out in some stores on Monday, more will arrive by early next week. He predicted stock of “will improve dramatically” in the coming months.

Biotech companies that import test kits have been warning for weeks that delays should be expected for both retail and wholesale orders.

Managing director of Roche Diagnostic in Australia, Allison Rossiter, said she did not believe there were any issues with businesses or consumers hoarding stock – rather, it must be accepted that global supply chains were under immense pressure.

“Everybody wants them, and we can only make what we can make. There is a much higher demand than what everyone is able to supply,” she said.

Ms Rossiter said Roche was now warning wholesale clients that there would be waits of as much as eight or nine weeks on bulk purchases of the company’s rapid tests. “If we can get them sooner, we will absolutely get them sooner – but if you order them today, [you] are absolutely not going to get them today.”

‘Everybody wants them, and we can only make what we can make. There is a much higher demand than what everyone is able to supply.’

Australian Chamber of Commerce and Industry chief executive Andrew McKeller said it was not too late for national cabinet to roll out a national program for small and medium businesses to receive test kits. Many businesses had been forced to buy up stock through consumer retail channels, he said.

“With severe shortages of RATs across the country, we have seen employers go from store to store to find enough rapid tests to ensure that their workplaces can be as safe as possible,” he said.

“The biggest issue is that we simply do not have an adequate supply of rapid antigen tests in Australia.”

Chief executive of the Council of Small Business Organisations of Australia Alexi Boyd said shortages are limiting how smaller businesses can use rapid tests as a safety tool. “This continues to be a problem for small businesses, and it’s not just about doling these out to businesses, it’s about having them readily available in the community.”