The Department of Homeland Security (DHS) is working to fix what it describes as “dangerous erosion” along a 14-mile stretch of border wall construction in California — one of what it says are a number of steps to protect communities there.

DHS specified that it is working to “remediate dangerous soil erosion” in San Diego, which it looped in as part of a number of measures to address damage that it blamed on the prior administration’s wall construction.

“Improper compaction of soil and construction materials along a wall segment constructed by the prior administration is causing dangerous erosion along a 14-mile stretch in San Diego, California,” it said in an April 30 statement. “DHS will begin necessary backfill projects to ensure the safety of nearby border communities.”

It noted that the work would not expand construction but simply fix existing construction to protect nearby communities.

Additionally, it announced that it will repair a flood barrier system in the Rio Grande Valley in Texas, after it says the Trump administration “blew large holes” in the system to make way for the border wall.

The construction of a wall at the southern border was a central promise by former President Donald Trump in his 2016 campaign, and his administration built more than 450 miles by the end of his term in office. 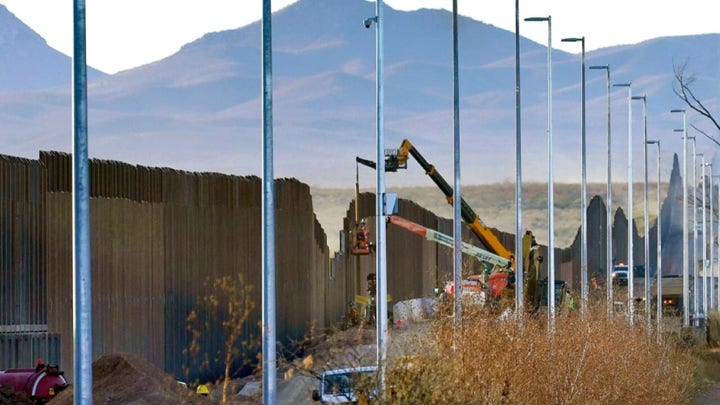 Opponents criticized it as a cruel and ineffective policy, and also flagged possible environmental consequences and the impact on nearby communities. Supporters of the wall pushed back, arguing that illegal immigration in those areas — prevented by the wall — hurts border communities as well.

President Biden promised that “not another foot” of wall would be built during his administration, and halted all border wall construction in his first day in office via executive order.

The White House has said that “limited” additional wall construction has been funded, despite an overall pause in construction — after a report that the head of the Department of Homeland Security (DHS) had said “gaps” in the wall could still be filled.