Casino group Star Entertainment has handed its top executives $1.4 million worth of bonuses despite missing their annual financial targets while pocketing $9.6 million in Jobkeeper subsidies to cover staff wages.

The Star revealed on Wednesday it paid its chief executive Matt Bekier $2.3 million for the 2020 financial year, down from $3.3 million a year earlier and $4.4 million in 2018. 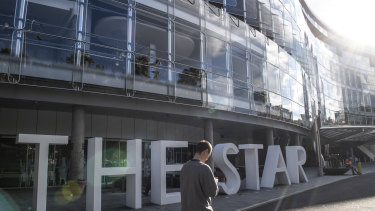 The Star Casino in Sydney was forced to close due to the COVID-19 pandemic. Credit:Louise Kennerley

But Star awarded Mr Bekier a bonus of $829,872 in deferred shares among $1.4 million given to the group's top five executives, according to Star's annual report. The bonuses were paid in equity to "preserve cash" and be available after a year if the executives stay with the company, the report says.

Star's remuneration committee chair Sally Pitkin said the executive team did not meet their financial targets for the year because of COVID-19, but the board "decided to exercise its discretion" and issue the bonuses based on other measures.

That included the executive team's response to the pandemic, the achievement of strategic goals and the need to retain key executives amid a period of "uncertainty" and competition from rival Crown Resorts' new Sydney casino.

Ms Pitkin said the group was 5 per cent ahead of its profit target and up 16 per cent compared to the prior year in February before the forced closure of its casinos pushed it to a $94 million full-year loss.

The Star said the group and about 7000 staff will have received almost $130 million in JobKeeper payments by the end of September. Between April 1 and June 30, The Star received $9.6 million through the scheme to cover the wages of staff who continued to work at the casino and were earning above the minimum Jobkeeper amount of $1500 a fortnight. Another $55 million went directly to staff who were either stood down or working on reduced hours.

A Star spokesman said JobKeeper allowed it to return staff to work when it otherwise would not have been feasible. "We were operating venues despite them not being profitable and across the final quarter made a substantial earnings loss," he said.

In addition to JobKeeper the company gave stood down staff two weeks of paid "pandemic leave" at a cost of $19 million and has paid $3 million in staff ineligible for JobKeeper through a hardship program.

The executives' equity bonuses equate to 40 per cent of cash bonuses available to them under their short-term incentive scheme.