As the Biden administration debates how much student loan debt to cancel through executive action, Senate Majority Leader Chuck Schumer (D-N.Y.) wants President Joe Biden to see the plight of one particular group as a reason to go big: veterans.

“Biden can do this with the flick of a pen… veterans are people who disrupted their lives and risked their lives — it doesn’t seem like much to ask,” Schumer told HuffPost in an interview on Thursday.

Student debt is crushing veterans. For-profit schools have targeted service families for years, trapping many with debt. About 200,000 service members owe almost $3 billion in student loans, and less than 10% have begun the process of loan forgiveness, an advocacy group called the Student Loan Borrower Protection Center found last year. The corresponding numbers among veterans, a bigger group than those currently serving, are likely far higher. And veterans say debt worries worsen the mental health challenges already experienced by many in their community.

Schumer, Sen. Elizabeth Warren (D-Mass.) and allies in the House, including Reps. Ayanna Pressley (D-Mass.) and Ilhan Omar (D-Minn.), have spent the months since Biden’s presidential win urging him to quickly wipe out billions of dollars of student debt by canceling up to $50,000 per person.

Biden has said he would cancel $10,000 per borrower, arguing that writing off more would be logistically impossible and too beneficial to rich Americans who attended expensive schools.

But the piles of loans among veterans and current troops show that forgiving a greater amount is not a matter of supporting the wealthy, Schumer said. 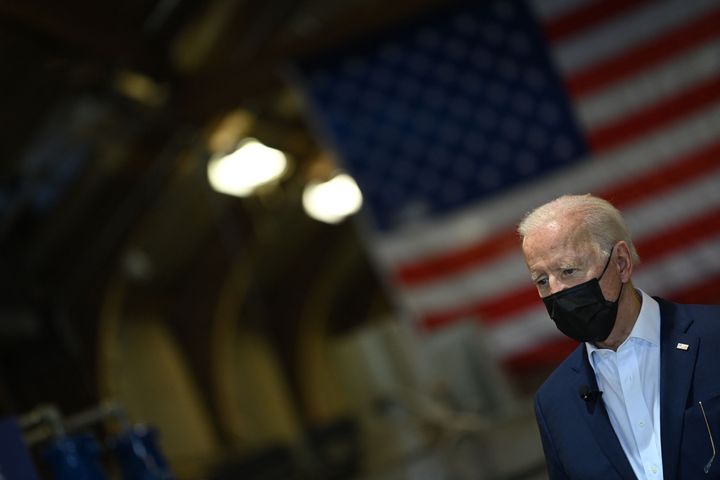 Saying the administration was “moving in our direction,” Schumer said that greater awareness about the debt burden among veterans and the armed forces could make that policy easier to roll out and defend.

“There is sympathy for veterans among some sectors of the population who might not be” otherwise supportive of expansive loan forgiveness, the top Senate Democrat told HuffPost.

The experience of Amanda Le’Anne Brunzell, a member of Common Defense, a veterans’ group that is working with Schumer on the issue, shows how the U.S.’s current approach to student loans can derail a service member’s life.

Brunzell (who uses they/them pronouns) joined the Navy out of high school in 2002. After facing sexual assault and retaliation, they left in 2005 but were told they were not eligible for G.I. Bill funding for college, which they had been counting on. (Brunzell is disputing the Navy’s claim through legal channels.) After returning home to Grand Rapids, Michigan, they felt wary of a traditional college. In 2006, they enrolled at the for-profit University of Phoenix, a behemoth that has long targeted veterans.

A flare-up of post-traumatic stress disorder forced Brunzell to drop their courses nearly two years in, and the university soon told them the bills for those classes would not be covered by federal aid, leaving Brunzell owing $6,000. The experience stopped Brunzell from re-entering higher education for more than a decade, and their debt, which has been transferred among various loan servicers, is now about $43,000.

“I wasted 12 years of my life,” they told HuffPost. “I wonder if I had been in a traditional college or university if that would happen to me — I could have been so much further and so much more accomplished in my life, but I’m now a 37-year-old going back to school.”

Last year, Brunzell enrolled at the University of Michigan with support from officials there and veterans’ groups. They are now applying to prestigious fellowship programs to work in public policy, in part to shield others from similar experiences. Through expansive loan forgiveness, Biden could “make my life easier,” Brunzell said — and boost the U.S. broadly.

“We’re falling behind because education is not affordable,” Brunzell added.

Schumer told HuffPost that recent conversations with the administration suggest Biden is open to changing his mind about his authority to cancel $50,000 in debt per person, comparing it to Biden’s decisions to defer repayments and suspend interest. And the senator emphasized that the other route for loan forgiveness that the president has publicly cited — legislation — would be challenging.

Biden has recently demonstrated his openness to being pushed left by fellow Democrats and activists by embracing progressive positions on waiving intellectual property limitations on coronavirus vaccines and increasing the U.S.’s refugee intake.

“Our movement is gaining strength across the country,” Schumer said.