Trump to hold rally on eve of Georgia Senate runoffs

CNN anchor Jake Tapper was lampooned Monday for getting upset that President Trump shared "mean tweets" about him amid the coronavirus pandemic.

It started when Fox News host Mark Levin mocked Tapper and CNN’s in-house media pundit Brian Stelter in a tweet, along with a story about a segment in which Tapper recently called White House press secretary Kayleigh McEnany a liar. 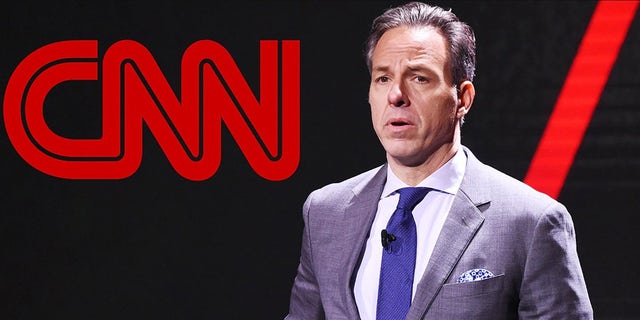 CNN anchor Jake Tapper got upset on Monday because President Trump shared "mean tweets" about him amid the coronavirus pandemic.

"Helter Stelter, Fake Tapper, et all, have forever destroyed their reputations. CNN has been fully exposed by Project Veritas and the daily insane rants of their on-air Democrat," Levin wrote, referring to recordings of CNN's conference calls that were recently published by Project Veritas that featured network honchos dismissing a story that was damaging to the Biden campaign.

Trump retweeted Levin’s message and Tapper – who is known within the journalism industry for confronting young reporters who write anything negative about him via private messages – went public with his criticism of the president. 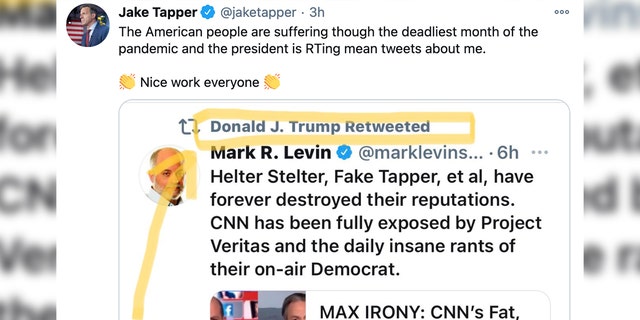 "The American people are suffering though the deadliest month of the pandemic and the president is RTing mean tweets about me," Tapper wrote to accompany a screen shot of Levin’s tweet with "Donald J. Trump retweeted" highlighted.

"The pettiest man in news, everyone," Houck wrote.

Levin also chimed in, "You’re such a clown, Jake. No circumspection. No professionalism. All narcissism all the time."

Many others mocked Tapper, too:

On Sunday, McEnany mocked Tapper after he criticized her while airing his grievances about the Trump administration’s treatment of the press. Tapper insisted that he doesn’t have McEnany on his program because she "lies the way that, you know, most people breathe," and therefore isn’t valuable to viewers.

"This is a therapy session for a broken network, and @jaketapper is lazy enough to participate by lobbing baseless personal attacks, with ZERO evidence," McEnany wrote. "Jake’s real problem: I do not leak. I do not lie. But I DO call out the lies of the media (i.e. CNN Russia collusion hoax!)"