Soul Patts, which holds a 40 per cent stake in coal miner New Hope, on Wednesday posted a 154 per cent jump in full-year underlying earnings (excluding one-offs) to $834.6 million, in its first financial year report since taking over investment group Milton.

With its final dividend rising more than 19 per cent to 43c per share, the conglomerate said it was “well positioned for rising interest rates, inflation and any potential downturn in the business cycle”. 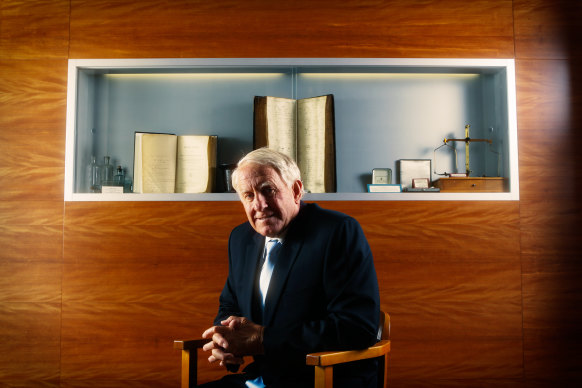 Milner told this masthead that its interest in Whitehaven had delivered a significant boost to its bottomline, with record high prices for thermal coal, used to generate electricity, boosting Whitehaven and Soul Patts’ coffers.

New Hope this week reported a 143 per cent rise in revenue to $2.6 billion for the year ending July 31, while its net profit rose from $79 million to $983 million. The price it receives for its coal rose from $101 in the previous financial year to as high as $493.5 a tonne in the fourth quarter.

And the supply/demand imbalance – driven by Russia’s invasion of Ukraine – is expected to keep prices high.

“The phone’s ringing from Europe every night trying to get coal from Australia, to the very obviously short on energy Europe. And Germany hasn’t even got an LNG depot,” Millner says.

He’s not alone in seeing good times ahead.

Goldman Sachs noted that New Hope expects thermal coal prices to remain above $US400 a tonne for at least the next 6 to 12 months, with the upcoming Northern Hemisphere winter acting as the key driver.

“There is material upside at spot prices in the longer term, with our earnings increasing by (more than) 200 per cent for FY24 onwards,” Macquarie equity analysts said after the New Hope results.

The major issue for Soul Patts, and the Australian economy, is elevated energy prices feeding into higher input costs for businesses, and a looming supply chain disruption as industries in Europe are forced to shut.

Millner is experiencing the problems first hand via WHSP’s 40 per cent stake in Brickworks, which also reported a strong result on Wednesday.

“I know for a fact through Brickworks, we import quite a bit of product from Europe, some of the factories are already closing down. They’re paying $100 a kilojoule for gas, which is not sustainable.”

Brickworks is insulated from immediate price rises thanks to long-term energy contracts, but Millner acknowledged the challenges for the Australian economy.

“If interest rates and inflation keep going (up), and labor costs and everything keep going up as well. I’m not prepared to call it a recession, but obviously, there’s got to be some headwinds ahead of us.”